Constellations: Serpens 'the Serpent' Content from the guide to life, the universe and everything 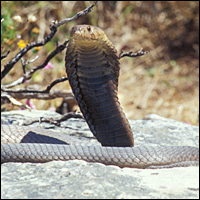 Serpens is the only constellation to occupy two separate portions of the sky, representing the snake which Ophiuchus 'the serpent bearer' has draped across his shoulders and divided by his torso. Serpens Caput is the head of the snake and Serpens Cauda is the tail. For the purposes of this Entry we shall treat Serpens as one constellation but reference each object separately.

Serpens Caput is the more northern of the two sections, containing the most listed stars. Caput shares its borders with Corona Borealis, Boötes, Virgo, Libra, Ophiuchus and Hercules. Serpens Cauda has borders with Aquila, Ophiuchus, Sagittarius and Scutum.

A snake entwined around a staff or rod is found on the symbol of medicine worldwide. Legend has it that the rod belonged to Asclepius2, the demigod3 of healing, who learned how to treat the sick from watching a snake bring herbs to its ailing brother. Asclepius became so skilled he actually brought someone back to life, which shocked the gods who jealously guarded their power. They could not allow the humans to live forever, so Asclepius was doomed. Zeus, the king of the gods, killed him with a thunderbolt. However, Zeus then honoured Asclepius and his beloved snakes by creating their image in the heavens, conjoined for all eternity as Ophiuchus the serpent bearer and Serpens.

The caduceus (magic wand) held by Mercury (Hermes in Greek), the winged messenger of the gods, is described as a rod with a pair of attached wings and two intertwined serpents. The caduceus (Greek: kerykeion) appears in many cultures with various meanings, but mostly it represents a symbol of immortality.

The scientific star names are simple to understand (if you know your Greek alphabet), the 'alpha' star means that it is the brightest star in that constellation. Combined with the genitive name, this is known as the 'Bayer designation'. Sometimes the order of brightness doesn't agree with the listing, this could be due to error at the time of cataloguing or fluctuation on the part of the star. The star table below lists them in order of highest magnitude. Some stars have proper names as well; for example, alpha Serpentis is Unukalhai. Others are known by their catalogue numbers.

Alpha Serpentis, Unukalhai, is a multiple system representing the heart of the serpent, although unukalhai literally means 'the neck' in Arabic.

Another named star is theta Serpentis, Alya, a binary star system in Cauda. Alya marks the tip of the serpent's tail and lies on the border with Aquila.

Tau Serpentis is a multiple system in Caput containing eight stars of varying magnitude and classification.

The NGC catalogue was compiled by John Louis Emil Dreyer (the director of the Armagh Observatory from 1882 to 1916).

There are two more open clusters which were discovered too recently to be included in the NGC, both are found in Cauda. IC 4756 is 1,300 light years distant and visible magnitude +4.6. Tr 32 would be much harder for the amateur astronomer to locate due to its much lower magnitude of +12.

There is one Messier object to be noted in Cauda, the awesome Eagle Nebula (M16), and one in Caput, M5.

The Eagle Nebula is over 6,000 light years distant and spans 20 light years from one side to the other. This emission nebula contains the famous 'Pillars of Creation', a star factory immortalised by the Hubble Space Telescope in 1995. Also part of M16 is the fabulously photogenic open cluster.

Caution: this fabulous sight will turn a mild interest in astronomy into cosmic overload faster than you can say Mandolin Jones. Named after its discoverer the US astronomer Arthur Hoag who reported it in 1950, Hoag's Object aka PGC 54559 is an enigmatic ring galaxy. It is situated above the snake's head asterism6 in the northernmost portion of Caput, close to the border with Boötes.

Hoag's Object has a central elliptical core and an outer ring which could have been the arms of a spiral, now joined. The radius of Hoag's Object is 100,000 light years: the overall effect is rather like a sparkling brooch; at 600 million light years distant, that's one large piece of jewellery! It has such a 'wow' factor that it was the most-uploaded image at the Galaxy Zoo forum in 2007. Uncannily, in the space that we can see through, another ring galaxy can clearly be seen in the background, which could be millions of light years more distant than Hoag's Object. As ring galaxies are extremely rare, the odds against this occuring must have been astronomical, until it happened!

Lynds Dark Nebula 183 is a dusty molecular cloud in Caput. It's one of the closest dark nebulae at just 325 light years distance. Another dark nebula in Serpens is LDN 483, which is located about 700 light years away.

There have been several extrasolar planetary systems found in this constellation up to 2011; the first was discovered in 1998. Figures given in the table below are the length of the planet's orbital period around its parent star, which we know of as a year. The mass of the extrasolar planet is compared to that of Jupiter, our Solar System's largest planet, known by astronomers as the 'Jovian scale'.

HD 168443 is a yellow main sequence (dwarf) similar to our Sun. It has two satellites, a superjovian planet and a brown dwarf (failed star).

While this Entry is mostly about the constellation Serpens, the author thought you may like some additional information on snakes and serpents.

Some snakes are harmless7, but the fear of snakes is quite a common phobia8. Ophiophobia (or Ophidiophobia) is the name given to this fear. Some people who have no contact with snakes in their daily life are frightened of them, which is known as 'irrational fear'. Others fear the snake's ability to inflict harm or kill in their home environment. A true ophiophobic would dread even the image of a snake in a book or on a TV screen.

No Fear of Snakes

There are people who like serpents, and some even keep snakes as pets. If you don't want to go that far, you can at least have a taster by visiting somewhere like The Jungle, a popular tourist attraction in Cleethorpes, NE Lincolnshire. The Jungle is also a rescue centre, providing homes for exotic animals which have been donated or abandoned by previous owners, including snakes. Close contact with some of the animals, like the resident family of meerkats, is allowed, but the snakes are displayed safely behind glass. If you're willing to pay for the privilege, the staff will retrieve an animal so you can be photographed with it.

After a hard day of basic training, you could eat a rattlesnake9.
- Elvis Presley

Snakes have played no small part in human history. It was a serpent in the Bible story Genesis which tempted Eve to partake of the fruit of the Tree of Knowledge, thus leading to human expulsion from the Garden of Eden. In the Gospel according to Mark: 'They shall take up serpents; and if they drink any deadly thing, it shall not hurt them; they shall lay hands on the sick, and they shall recover' shouldn't be taken literally, as the Rev George Went Hensley paid the price of snake-handling in 1955.

Snake references are made in generally derogatory terms, possibly stemming from the Biblical connection. Ergo, a snake in the grass is someone who is not to be trusted. Some snake terms have entered modern language, for example, an Australian person in a blind rage would be described as mad as a cut snake.

A snake in the lexicon of golf terminology is a long putt (a golf stroke) which rolls over the curvature of the green, much as a snake would slither along the ground.

There are people who like to tattoo their bodies and snakes are a powerful image, making them a popular choice of design. One such is the Kundalini, a Sanskrit word for 'coiled snake', and also translates to serpent power, which is usually engraved as if coiled around the person's backbone.

Snake references abound in the magical world of 'Harry Potter'. JK Rowling gave her boy wizard the ability to speak Parseltongue (snake language), making him a 'Parselmouth'. One of the books, Harry Potter And The Chamber Of Secrets featured a gigantic snake called a Basilisk, which Harry had to do battle with. He was aided in being victorious by the phoenix which belonged to Professor Dumbledore.

Snake Entries in the Edited Guide

1Current IAU guidelines use a plus sign (+) for northern constellations and a minus sign (−) for southern ones.2Various other spellings include Aesculapius and Asklepios.3He was the son of the god Apollo and the mortal Coronis.4A light year is the distance light travels in one year, roughly 5.88 trillion miles or 9.46 trillion kms.5Astronomers refer to such events as 'cosmic trainwrecks'.6A group of stars which isn't a recognised constellation.7But not all. You would need to be careful when visiting Australia.8Phobia comes from phobos which is Greek for 'fear'.9This is a jest, akin to a British person saying they're so hungry they could eat a horse.