Constellations: Capricornus 'the Sea Goat' Content from the guide to life, the universe and everything 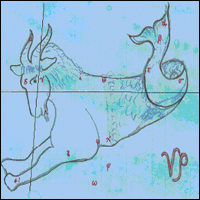 As it was in the days of Noah,
When men ignored the signs
It's that way again my friend;
Don't pay it any mind!
O Capricornus, thou with curly tail-
Can you see behind the veil?
- an h2g2 Researcher

In the autumn sky, to the upper right of Piscis Austrinus, between the constellations  Aquarius and Sagittarius, stands Capricornus the Sea Goat - a male deity that was turned into a hybrid creature. Star names suggest that this goat was associated with one used as a sacrificial offering at the start of winter. Two thousand years ago, the sun was in this constellation during the winter solstice, so the southernmost point at which the sun can be directly overhead at noon is known as the Tropic of Capricorn2.

In the mid-1800s, men like Jean-Baptiste Joseph Delambre (1749 - 1822) speculated about the position of an unknown planet causing slight deviations in the orbit of Uranus. Mathematicians John Couch Adams (1819 - 1892), and Urbain Jean Joseph Le Verrier (1811 - 1877) calculated where it should be. Le Verrier gave his calculations to a German astronomer, Johann Galle (1812 - 1910), and in September of 1846, Galle found the planet a short distance from Mu Capricorni, just to the left of where Le Verrier had predicted. One hundred and sixty-two years later, the 'new' planet, Neptune, is once again in the tail of Capricornus, not far from where it was first seen.

While Capricornus literally means 'male goat' or 'mountain goat', the constellation is usually depicted as a 'sea goat', with the upper body of a horned goat and the lower body of a fish. There are various explanations for this image and its connection with the asterism. Capricornus is associated with an area of the sky called the 'Sea', in which many of the more aquatic constellations, such as Aquarius and Pisces, can be found.

Greek myth suggests that Pan, a minor god, was on the banks of the Nile when the monster Typhon suddenly appeared. When Pan jumped into the water to hide, his lower half became a fish. The part of his body above the waterline became a horned goat - though his usual figure was that of a man above the waist and a goat below. This so amused Zeus, the king of the gods, that he created the constellation Capricornus to remember the event.

Another version states that Pan helped Zeus in his battle against the Titans by finding the Conchas, large shells that were the 'horns of the sea', whose trumpet-like noise caused the Titans to run away in fear. Zeus honoured him by placing Capricornus in the heavens, an image meant to represent both horns and water.

Aegipan or Goat-Pan is another Greek god who may or may not be identical with Pan in his fish-tailed goat form - or might be his father. Together with Hermes, the messenger of the gods, he helped Zeus fight Typhon by retrieving Zeus' stolen sinews through use of a plan involving a broken lyre, a prince, and a flock of sheep. Zeus recognised his efforts by placing an image of Aegipan in the heavens.

The constellation Capricornus also represented the Augaean Stables, accumulating all the sin and uncleanliness accumulated during the year which were to be 'washed out' at the solstice - perhaps by Aquarius pouring out his river, reflecting one of the Twelve Labours of Hercules.

To the ancient Sumerians and Babylonians, Capricornus was associated with the god Enki or Ea, who brought civilisation from the sea and was symbolised by a goat and a fish, later combined to make the 'sea goat'.

About 400 years ago, Johann Bayer (1572 – 1625) first started putting Greek letters to the brighter stars. Below, you will find Bayer designations, the lowercase Greek letters associated with the stars. Following Bayer's system, the brightest star would be designated as alpha, but here, delta is brightest - this may be due to inaccurate measurements, or to variations in the stars' light intensity.

Charles Messier (1730 – 1817) wrote the Messier Tables, a first attempt at cataloguing astronomical objects, which contained a total of 110 entries. The New General Catalogue, compiled by John Louis Emil Dreyer (1852 - 1926), was first published by the Royal Astronomical Society in the late 19th Century. It was expanded to include two Index Catalogues. This list of star clusters, nebulae and galaxies was revised again in 1973, and is continually updated by the NGC/IC Project. Below is a list of the deep space objects within Capricornus with their Messier (M), New General Catalogue (NGC) and Index Catalogue (IC) designations.

Long Ago and Far Away

Since light does not reach us instantly, just travels very fast, scientists using tools like the Chandra telescope look far back into the past of the universe. One galactic cluster labelled MS2173.3-2353 is being observed with light that has travelled 3.5×109 years to reach us. Using such information, workers on the Einstein Medium Sensitivity Survey are making new estimates of the total mass and energy (including dark energy) of the cosmos, and their effect on the expansion of the Universe.

Meteor showers are caused by very small objects (often just specks of dust) which burn up from friction with the air in the upper reaches of the Earth's atmosphere. They usually result from the trails of comets that have crossed the Earth's orbit, leaving debris behind them. Several of them cross Earth's orbit in the constellation Capricornus, and are thus associated with the constellation.

1Current IAU guidelines use a plus sign (+) for northern constellations and a minus sign (−) for southern ones.2The Tropic of Capricorn, at 23° 26' 22" S, is of the five major circles of latitude, the others being, from north to south: the Arctic Circle (66° 33' 38" N), the Tropic of Cancer (23° 26' 22" N), the Equator (0° latitude), and the Antarctic Circle (66° 33' 38" S).3This system is composed of four stars gravitationally bound. The main star is type A5.4A light year is just under ten trillion kilometres, defined as the distance light travels in a vacuum in one Julian year of 365.25 days.5One megalight-year is equal to one million light years.6 The gigalight-year is equal to one billion (short scale) or 109 light years. It is the largest unit for measuring distance commonly used.7An Astronomical Unit is about 150 million kilometres, defined as the distance from the Earth to the Sun.8A sub-stellar object that isn't massive enough for hydrogen-burning nuclear fusion, but shares other properties with stars.