Uranus Content from the guide to life, the universe and everything 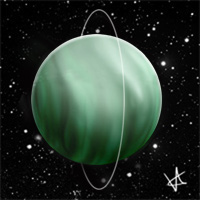 Uranus1 is the seventh planet from our Sun and is a gas giant. Its blue-green colour is caused by methane gas in an atmosphere mainly composed of hydrogen and helium.

The Discovery of Uranus

Sir William Herschel discovered Uranus on 13 March, 1781. This came as a bombshell in the astronomical world, as the other planets had been known since before the start of recorded history. It had never occurred to anyone that there might be another one. Herschel was an instant celebrity. He called the new planet Georgium Sidus, meaning 'star of George', after George III, his patron. After that it was known as Herschel in his honour, before Johann Elert Bode suggested the name Uranus, after the Greek god of the heavens, husband of Gaea and father of the Titans.

A gas giant located between Saturn and Neptune, this planet has drawn little attention to itself. Astronomers noted its tilt but could see few details on its face. However as the first decade of this millennium progressed, advances in adaptive optics2 began to give a better picture of what Uranus is like.

Uranus seems to have been pushed over on to its side. Its axial tilt is 97.77°, which means that it rotates on its side. This means that over most of the planet's surface, the sun does not set once every Uranian revolution, but instead stays above the horizon for half a Uranian year, or 42 Earth years, which is then followed by a similar period of darkness. It also affects the seasons. When Voyager 2 flew by it was the height of austral summer. This meant that the Northern Hemisphere was in frigid darkness facing away from the Sun. Uranus looks very bland, but actually has fast-moving clouds in its upper atmosphere, which are very faint. Its atmosphere is subject to seasonal variations; different things happen as the Sun is in different parts of the Uranian sky.

Uranus, like Neptune, is mainly made up of rocks and ice beneath its atmosphere, but unlike Jupiter and Saturn, it doesn't have large amounts of liquid hydrogen3. The core of Uranus is relatively small and is wrapped in a mantle of pressurised slush composed of ammonia, water and methane. This creates a powerful magnetic field. As the magnetic pole is tilted some 60° to the axis it turns the planet's magnetosphere like a corkscrew.

The Rings and Satellites

In 1977 an astronomical team of the Kuiper Airborne Observatory led by James L Elliot first observed the planet's rings. The rings are named, beginning at the inner ring: Alpha, Beta, Gamma, Delta and Epsilon. The team of Elliot, Dunham and Mink later found a further four rings which were verified by Voyager 2 in 1986, and also identified two more. Now there is a total of 13 rings thanks to two detected by the Hubble in 2005. The rings are quite dark, like those of Jupiter, with the brightest being the Epsilon ring.

Astronomers continue to find moons around Uranus. Up to 2009, 27 had been discovered. All are named after Shakespearean characters except Umbriel and Belinda, who are characters from Alexander Pope's 1712 poem The Rape of the Lock. The moons are listed here in order of year of discovery.

At one point, astronomers 'lost' two of Uranus' satellites, Cordelia and Ophelia. They shepherd the Epsilon ring, and were discovered by Voyager 2. They are both very small, and were being tracked prior to observations by the Hubble Space Telescope when they were lost, although happily they have been found again now.

1Pronounce it 'yoor-uh-nuss' according to Sir Patrick Moore.2The technology of reducing the distortion of light by means of a sensor, a deformable mirror and a computer control.3One estimate says 15%.