The Solar System Content from the guide to life, the universe and everything 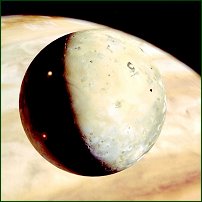 The Solar System is a family of eight planets, several dwarf planets, and many smaller objects, all revolving around the same star - our Sun.

To the ancient Babylonians and Greeks the five visible planets1 were known as wandering stars because from night to night they changed their position in the sky. Observers have wondered what these 'wandering stars' are and how they are related. The invention of the telescope answered some of the questions yet many remain. How did the planets form? Why is the Sun a single star in a sky full of binary systems? Why is Ceres smaller than Mars? Why does Jupiter have its Great Red Spot? Is there life on Europa? We have theories that try to answer some of these questions, but there is still a lot we need to learn about this our own Solar System.

How did it get here?

The Solar System probably formed from a cloud of mainly hydrogen gas, with various other heavier elements mixed in. Gravity caused a portion of this cloud to condense enough for nuclear fusion to begin. Thus the Sun (Sol) was born. The other matter in the nebula of gas surrounding the young star probably condensed to form protoplanets, some of which collided with each other, and some of which survived, eventually making up the planets and other bodies in the system which we see today. The composition of the planets at various distances from the Sun can be explained by the heat generated by the Sun - the planet Mercury only has a thin silicate mantle because silicates have difficulty existing that close to the Sun.

We can be pretty sure that the objects in the Solar System formed at around the same time - the Sun didn't capture planets which had already formed somewhere else.

The star around which this whole system revolves is considered an ordinary G class star and yet it has not too many X-rays, not too little infrared, and is just the right size for carbon-based life to evolve in the system. Energy from the Sun drives virtually all the cycles of life on Earth. Sol is stable over long periods of time, though it is expected to start running down in about 5 or 6 billion years.

Hot enough to boil tin on the sunward summer side, cold enough to freeze ice in the dark winter side. It has an extremely thin atmosphere and a rotation period roughly twice as long as the time it takes to orbit the sun. Mercury is a quite inhospitable place. Any visitor would do well to stay within the thin ribbon of twilight there. Mercury has no satellites and its appearance more closely resembles a satellite than a planet.

Our nearest planet, Venus, was for centuries a mystery. Observers would see it in the morning or evening sky but lacked the technology to see beneath its clouds. Due to an out-of-control greenhouse effect, not only is the sky constantly covered in clouds, but it rains all the time and this rain contains concentrated sulphuric acid. On the surface, the temperature averages 737K (464°C) which would melt any common rain-gear. Venus has no satellites.

The Earth & The Moon

The cradle of humanity Earth has this huge satellite called the Moon. It is an amazing satellite that, despite not having an atmosphere, has been visited safely by humans. Both bodies dominate each other's sky, and have complicated gravitational interactions. Due to their comparative size and gravitational interaction some have called this a double planet. As a result, the Earth's seas vary in height as much as two metres every rotation. The Moon's rotation has perfectly matched its orbital period (also due to these interactions) and Earth's rotation is slowing down for the same reasons.

NEOs (Near Earth Objects) are small objects whose orbits cross our own orbit around the Sun. Some scientists credit a collision with one of these for the extinction of the dinosaurs, and say it is only a matter of time before we collide with another.

This planet has fascinated humans for centuries because it is so near. Giovanni Schiaparelli thought that he saw straight canals on Mars, which led to suspicions of intelligent life. Better equipment later showed that these canals were not there. With robotic probes and orbiters mankind continues to hunt for life on the red planet. Mars has an atmosphere rich in carbon dioxide and recent studies have confirmed the presence of large quantities of water. Mars turns on its axis about once every 25 hours.

The planet has two moons Phobos and Deimos. The inner moon Phobos circles the planet every 7.65 hours. This means it rises on the western horizon and sets on the eastern one less than four hours later.

The Asteroid Belt constitutes a vast ring of lumps of rocks kept in order by the gravitational influences of Jupiter and Mars. According to the Bode-Titius law there should be a planet here. Instead we have a dwarf planet (Ceres) and many smaller bodies, most of which are confined to a relatively narrow plane within the Solar System2.

Discovered in 1801, this object stopped accreting matter at 487km radius. This is short of planetary status but sufficient to be considered a dwarf planet.

Being the biggest planet in the system, the small metallic hydrogen core of Jupiter generates some pretty intense magnetic fields. It also has a system of 63 satellites, the largest of which is Ganymede. Jupiter's anomaly is its obvious storm systems, including the 'Great Red Spot'. The whorls and patterns on the upper atmosphere are well worth looking at.

Centaurs are small icy bodies that have accreted matter with orbits between Jupiter and Neptune. With the ability to be an asteroid, a comet, or both, these objects were named after a half-horse, half-man figure from Greek mythology. Centaurs have unstable orbits and so do not return on a regular schedule like many other objects in the system do.

Saturn, the second largest planet, has a ring system to die for, made from high-albedo3 ice, kept in place by members of its 60-satellite contingent. One of these satellites, Titan, (which is actually larger than Mercury or Pluto) has its own atmosphere and was visited in 2005 by the ESA Huygens probe.

Big, blue, with 27 satellites, Uranus has been the butt of some terrible jokes! It seems to be looking for some kind of prize for sheer weirdness. First, the axis of rotation is almost 90° to the plane of the ecliptic, so its polar regions get more sun than the equator. The equator is still somehow warmer than the poles, though, and no one knows why. Alone of the four largest planets, it doesn't generate more heat than it receives,  leaving it cold. To cap it all, Uranus' magnetic field is at 60° to its axis of rotation.

Neptune, is the outermost planet in the system. As of 2008 it had 13 satellites listed. It seems like an imitation of the weirdest features of the other three giants. It's got some twisty rings, like Saturn; it's got a storm spot like Jupiter; and it's got a tilted magnetic field like Uranus. The only new weird thing it adds to the broth is that the winds are unaccountably stronger than they should be.

There are over one thousand trans-neptunian objects.
Here are some of the largest ones found (dwarf planets marked with asterisk).

Due to its small size and eccentric orbit, Pluto has always been considered a bit of an oddball by astronomers, who eventually admitted in 2006 that Pluto isn't a proper planet at all, and demoted it to the new category of 'dwarf planet'.

Pluto and its moon Charon are near enough in size to each other to be considered the second double planet in the Solar System, along with the Earth and the Moon — Pluto and Charon are closer to each other in size than the Earth and Moon; and they are tidally locked so the same sides are always facing each other. However the International Astronomical Union still considers Charon a satellite rather than a dwarf planet. Pluto also has three smaller satellites: Nix, Hydra and the provisionally-designated S/2011 (134340) 1.

Pluto's orbit is quite eccentric (elliptical rather than circular), and for a few years it is actually closer to the sun than Neptune. It is cold on Pluto, and getting colder. When it wanders back out to aphelion - its furthest distance from the Sun - the atmosphere freezes and falls as frozen crystals of methane or nitrogen.

When the IAU created the new category 'Dwarf Planet' they had this chunk of ice in mind. First discovered by the team of Brown,Trujillo, and Rabinowitz on 21 October, 2003 this object was finally named Eris after the goddess of discord after throwing large segments of the astronomical community into conflict as to whether it should be deemed a planet.

The Kuiper Belt is a region 30 to 50 AU away from the sun. Most trans-neptunian objects lie in this belt. The Oort Cloud is a band of debris stretching out perhaps as far as 10,000AU. Although objects there are too small and too distant to observe, this belt can still be deduced by studying the orbits of comets. More recently an 'inner oort cloud' was proposed of which Sedna is the first member. As the quality of our observing equipment and method improves more members will be seen in this region.

Comets are small objects (mainly made up of dust and ice) which develop tails as they warm up approaching the Sun. In ancient times observers considered them harbingers of evil events. They have highly elliptical orbits and a few burn up in the sun or are hurled clear of our Solar System. A few short-period comets like Wild-2 (Comet 81P) stay within the orbit of Jupiter but most travel to the Oort Cloud before returning.

1Mercury, Venus, Mars, Jupiter, and Saturn.2All the planets' orbits are approximately in the same plane, so from the side, a diagram of the Solar System's orbital paths looks flat.3The albedo of an object is the amount of light it reflects.4Astronomical Units (the distance from the Earth to the Sun).5Names are submitted by discoverer. Two different teams claimed to have discovered this body. The name given by the American team was officially accepted.

1Mercury, Venus, Mars, Jupiter, and Saturn.2All the planets' orbits are approximately in the same plane, so from the side, a diagram of the Solar System's orbital paths looks flat.3The albedo of an object is the amount of light it reflects.4Astronomical Units (the distance from the Earth to the Sun).5Names are submitted by discoverer. Two different teams claimed to have discovered this body. The name given by the American team was officially accepted.