Jupiter Content from the guide to life, the universe and everything 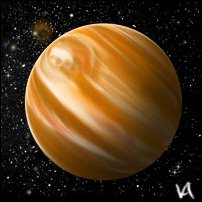 Jupiter is the largest planet in the solar system. It is a giant ball of gas vapour, is the fifth planet and is about the 2,000th rock from the Sun, because of the asteroid belt between Mars and Jupiter.

So it's large - 1,300 times the size of Earth, to give it scale - but how massive is it? Well the mass1 is only 318 times that of the Earth, so it does not appear to be made of the same material as Earth. This was a problem that puzzled astronomers until they worked out that it's made of gases, hydrogen and helium to be exact. Jupiter is still very massive, though - it has more than twice the mass of all the other planets combined.

Inside the Gas Giant

The very top of Jupiter is where the clouds swirl, orbiting in 9 hours 55 minutes with a thickness of 1000 km. This part really is gas with clouds of helium, water vapour, ammonia and hydrogen sulphide, which encompass the globe and erupt in huge lightning storms that dwarf the ones we have. The cloud layer is cut into many bands that track across the surface in opposite directions, and these bands are powered by small eddy currents between them, which in turn are powered by the Sun.

The same effect occurs on Earth in many places, but the easiest example to see is a river. The River Severn in Gloucestershire is a prime example: where it becomes wide and slow moving, often one section will flow faster then the other, with spiralling currents between them. And of course there is the Great Red Spot, a huge turbulent storm that feeds off smaller eddy currents. This storm, three times as large as the Earth, has been around since at least 1666, and will be a prominent feature of Jupiter for a long time to come.

As you descend the gases become denser until eventually the hydrogen, the main constituent, condenses into a liquid from the pressure of the gas layers above. This huge ocean of hydrogen encompasses a denser and rather exotic layer of hydrogen, which behaves like a metal. This layer is highly compressed under a pressure of 10 million atmospheres2 and can conduct electricity, and it is this layer that generates Jupiter's great magnetic field.

The core of Jupiter is small, and consists of molten rock at 24,000K. It is about ten to 15 times the mass of Earth.

Jupiter radiates more energy than it receives from the Sun. Heat is generated by the Kelvin-Helmholtz mechanism, or the gravitational compression of the planet. Jupiter is much too small to ignite a fusion reaction.

Jupiter, like the other gas giants, has a satellite and ring system.

Jupiter has a relatively simple ring system, in three parts. Closest to the planet is the Inner Halo, which is made of fine dust particles. Then comes the Main Ring, which is the brightest. Outside this are the two Gossamer Rings, named Amalthea and Thebe after two small satellites in the ring system.

Jupiter's rings were a completely unexpected discovery; two scientists working on the Voyager 1 mission suggested that Voyager should look and see if there were any, as it had travelled so far. The other members of the team thought that the chances of Jupiter having a ring system were practically nil, so it was a big surprise when they turned on the camera and saw them!

Jupiter's rings are dynamic. They are formed from micrometeor impacts with Jupiter's inner moons, from which the particles eventually fall towards the planet. Jupiter's rings have been studied extensively by the Earth-based Galileo telescope.

Jupiter has over 60 confirmed satellites. Galileo Galilei observed the four biggest: Io, Europa, Ganymede (the biggest satellite in the solar system) and Callisto. He used these to help prove Copernicus' heliocentric model of the Solar System; these moons orbit Jupiter, not the Earth.

1Not to be confused with weight - weight is the force of gravity acting on a mass.2One atmosphere is a standard measure of pressure, with one atmosphere being the air pressure at sea level on Earth.