Earth Content from the guide to life, the universe and everything 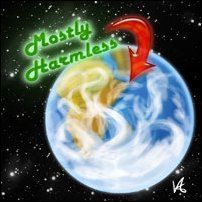 Earth is the third planet from the Sun, and, as far as we know, where all humans live.

Earth's atmosphere is mainly made up of Nitrogen (78%). The other major atmospheric gas is Oxygen (21%) with very small amounts of Argon, Carbon Dioxide, Neon, Helium, Krypton and Hydrogen. Earth's weather is relatively calm by solar system standards - wind speeds vary from 0 to 100m/s (compared with Neptune's 560m/s wind speed).

As far as we know, Earth is the only planet in the solar system that supports life, although it is believed there are other candidates, such as Europa. Earth is suitable for living things2 because of its molten core, which causes a magnetic field around the Earth that protects the surface from harmful radiation and particles coming from the Sun, and because of its abundant water.

Earth is in possession of a rather large satellite, called the Moon.

1For further information on Earth, see the rest of the Guide.2That is, living things which bear resemblance to us; there may be other types of life out there for which earth would be eminently unsuitable.