Neptune Content from the guide to life, the universe and everything 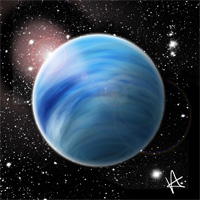 Neptune is the eighth planet from the Sun. It is a gas giant like Uranus, Saturn and Jupiter, and is very similar to Uranus - they are around the same size and the same colour - and they're sometimes described as twins. However there are differences; Neptune's axial tilt is normal, and it has an internal heat source.

Johann Gottfried Galle confirmed the existence of Neptune in September 1846. The path of the planet Uranus had deviated from its predicted course quite badly, enough so that the errors in the original calculations of its path couldn't be blamed. Urbain Jean Joseph LeVerrier calculated the position of the planet that it was thought was exerting a pull on Uranus to make it stray, and Galle and his student Heinrich D'Arrest used these calculations to observe Neptune. At the same time, an English astronomer John Couch Adams calculated the position of Neptune. However, due to a man called John Challis who didn't check his results properly, Galle made the discovery first. Happily these days both LeVerrier and Adams are credited with the discovery of Neptune.

However, it could have been very different. On 27 December, 1612, Galileo Galilei was sketching the moons of Jupiter and noted a 'star', which was almost certainly Neptune. He unknowingly observed Neptune again on 28 January, 1613, and noted that it had apparently moved in position from the previous night. He was unfortunate that Neptune was in a barren region of the sky with no bright stars for reference at the time, so this remains one of astronomy's 'might have beens'.

Other observations were made of Neptune and its motion. JJ Lalande in 1795 recorded it but thought that his first observation had been faulty and the 'star' hadn't moved. John Lamont saw it in 1845 and 1846, and very nearly beat Galle to the discovery, but he didn't compare two observations of the same piece of sky or he would have seen that Neptune had moved, and so was in fact a planet.

Neptune's atmosphere is the only part of Neptune that we can see directly. The upper atmosphere is made up of hydrogen, helium and methane, giving the planet its blue colour.

Neptune has weather, made up of methane clouds, storms and hazes. The biggest atmospheric feature at the time of the Voyager 2 flyby was called the Great Dark Spot, a massive anti-cyclonic storm system that was about the same size as Earth. It was in the southern hemisphere of Neptune, but recently the Hubble Space telescope has shown that this storm has dissipated, and there is now a big storm in the northern hemisphere of the planet. An internal heat source may be responsible for the volatility of Neptune's weather.

Neptune is the windiest place in the solar system. Wind speeds are nearly as fast as the speed of sound, which at Neptune's temperature of -213°C is 560m/s.

It is impossible to see exactly what it's like inside Neptune. It is thought that there is an internal heat source because its weather is violent, and although it is 1.5 billion km further away from the sun than Uranus is, its temperature is about the same.

Neptune, like the other gas giants, probably has an interior made up of rock and ices.

Neptune has 14 known satellites1. The two most interesting are Triton and Nereid. Triton is the biggest, and has retrograde motion about Neptune. Nereid's orbit is very eccentric.

Neptune, like the other gas giants, has rings: the reddish Adams ring, the narrow LeVerrier ring, the dusty Galle ring and the 'plateau' ring shepherded by the satellite Galatea.

Beyond Neptune lies the Kuiper Belt, described in The Kuiper Belt and the Oort Cloud. This region includes a number of dwarf planets, including Pluto, Quaoar, Eris and Sedna.