Mars Content from the guide to life, the universe and everything 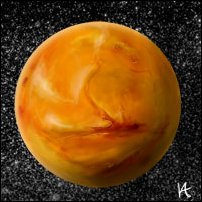 Mars is the fourth planet from the Sun. It's about one-ninth as massive as the Earth, and about 1.5 times as far away from the Sun. This means that going outside without a spacesuit is not a good idea - the atmosphere is 100 times as thin as Earth's and it's poisonous, so you'd immediately suffocate.

The temperature is well below zero most of the time so your body would soon be frozen solid. And if that's not enough, the surface is totally dry and barren and composed of chemicals which would quickly decompose flesh, and, since there's no ozone layer, high-intensity ultraviolet radiation would add the finishing frying touch.

Is there a plus side? Yes - the weaker Martian gravity. Some space scientists think that staying indoors and having sex in this weaker gravity would be a lot of fun1. Mars has also been a prime candidate for exploration ever since people started fantasising about little green men...

Mars has two moons, Phobos and Deimos. They are probably captured asteroids.

Volcanoes: Mars has some huge volcanoes, the biggest being Olympus Mons, which is also the biggest in the known solar system. Olympus Mons is about three times as high as Everest, and measures 600km across - about the same size as the state of Arizona.

The Valles Marineris system: A series of canyons extending 3000km across the surface, compared to which Earth's Grand Canyon is but a speck.

The Possibility of Life: Although the surface of Mars is barren today, evidence suggests that water once flowed on the surface. In the distant past the surface of Mars may have been warm and wet, and there may even have been oceans. Most of the water today is probably underground, and if there are little green men on Mars, underground is where they'll be hiding. If we found life on Mars it would mean the whole galaxy is teeming with life.

The Possibility of Future Colonisation: Although Mars today isn't a friendly place, the good news is that it can be modified. Theres enough water and other important chemicals there for a colony to be self-sustaining. Once colonies are established, terraforming can begin. Terraforming would involve the controlled modification of the planet's atmosphere to make it habitable for life. Basically, if we went to Mars and pumped a whole lot of greenhouse gases into the atmosphere, everything would get warmer and thicker and eventually we wouldn't need spacesuits any more. Unfortunately it's not nearly as easy as it sounds...

1Which probably says more about space scientists than Martian gravity.