Venus Content from the guide to life, the universe and everything 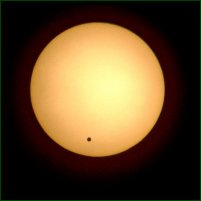 Venus is the second planet from the Sun, often considered to be Earth's sister planet. Its proximity to the Sun makes it very different to Earth, however.

Venus was one of the planets known to the ancient civilisations, and is sometimes identified as the Morning or Evening Star, as it is visible fairly close to the horizon in the morning or evening, and is very bright. This brightness may be what gave it its name - Venus was the Roman goddess of love (Aphrodite in Greek mythology). Almost all Venus's surface features are named after females.

Actually, Venus was thought to be two different objects in prehistoric times - Eosphorus (the Morning Star) and Hesperus (the Evening Star). Greek astronomers, however, knew that they were both the same object.

Galileo Galilei observed the phases of Venus, which added evidence to Copernicus' heliocentric model of the solar system - that is with the Sun at the centre, and the other objects orbiting round it. Other evidence for this came from his observations of Jupiter's moons.

Venus was also the first planet that we tried to send space probes to. Venera 9 landed on its incredibly hot surface, and the Magellan probe used radar to map the Venusian surface. In fact at one point, Venus's surface had been scanned in better detail than Earth's!

Venus's atmosphere is mainly made up of carbon dioxide, with clouds of sulphuric acid that obscure the Venusian surface. Wind speeds in the upper atmosphere reach 350km/h, but are slower lower down.

Venus has a very thick atmosphere - the atmospheric pressure is about the same as the pressure you would feel if you were 1km below the surface of an ocean on Earth. Venus has a runaway greenhouse effect; infrared radiation travelling to the surface of the planet gets reflected back to the planet by the atmosphere, heating it considerably. Although Venus is much further from the Sun than Mercury, its surface temperature is hotter. Venus's surface temperature is about 740K, which could melt lead.

Venus's atmosphere completely obscures its surface. Because Venus is similar to Earth in size, it was thought that it might have an Earth-like surface. This proved to be wrong, however. Although both planets have young surfaces with few impact craters, Venus is much too hot to have liquid water, although it may have had some millions of years ago. The surface is mainly made up of rolling planes, although there are some interesting volcanic features.

Venus's day is very long; it lasts for 243 Earth days, while its year is only 225 Earth days. Venus actually revolves in a retrograde motion, the opposite way to which the Earth and most of the other planets spin, which means that if you were on Venus, the Sun would rise in the west and set in the east. Because Venus spins so slowly its interior doesn't generate a magnetic field. Venus probably has a similar structure to Earth, with a molten iron core.

Venus has no moons, although between 1672 and 1892 various astronomers thought they had seen one. This eventually got named 'Neith' before it was proved to be a succession of different stars.