Eris - Dwarf Planet Content from the guide to life, the universe and everything 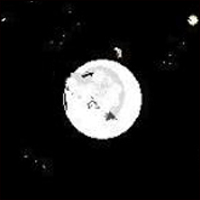 One of the dwarf planets, Eris has been a source of consternation from the day it was first recognised as being a member of the Solar System.

Discovered by the team of Brown, Trujillo and Rabinowitz on 21 October, 2003, Eris takes its name from the goddess of discord after throwing large segments of the astronomical community into conflict as to whether it should be deemed a planet. The final decision was that this was not a planet.

The orbit of Eris is very eccentric (elliptical). At its furthest from the Sun it is 2.6 times as far as when it is at its closest. The orbit is also inclined at an angle of 44.19° to the plane of the orbit of Jupiter (which is more or less the same as that of the other major planets). This compares to 17° for Pluto and 11.9° for Sedna. This extreme angle places it currently south of the zodiac in the constellation Cetus (the Whale). The dwarf planet Eris and its companion are currently near their furthest point from the sun. At this distance the surface temperature is 27K (-246°C), cold enough to freeze the methane which at hotter temperatures would make up its atmosphere.

By studying the motion of its moon, Dysnomia, scientists were able to deduce the mass of this dwarf planet, but the period of rotation was not known until 2008, when the Swift Telescope provided a likely value for one day, as given in the table earlier.

One account says that the Greek goddess Eris tossed an apple labeled 'to the most beautiful' into the midst of three goddesses. This caused a dispute about who the apple referred to. Rather than summoning her to explain, Zeus instead commissioned Paris to choose the most beautiful. The three goddesses attempted to bribe Paris. He chose Aphrodite who had offered him Helen of Troy, initiating the Trojan War - much to the delight of Eris.

This object almost became a planet. The decision to make Eris and Pluto dwarf planets was decided on the basis of pragmatism rather than science. Had Eris been discovered 40 years earlier, it would have been a planet, but by the turn of the century a multitude of objects had been found in the Kuiper Belt and they couldn't all be planets just because they rotate around the sun, so where do you draw the line? In August 2006 astronomers meeting in Prague struggled with this problem, and finding one that was actually larger than Pluto they had to ask 'Were we wrong making Pluto a planet, and just what is a planet, anyway?' Some wanted to keep Pluto as a planet, and make Eris the next planet. The group that had the most votes, however, wanted to have no more additions to the list and hold the number at eight. So then what do you call something that is larger than Pluto and rotates around the Sun? The answer they came up with is a dwarf planet.

The moon of Eris was discovered in September 2005. When the name Eris was submitted it was decided to use the name of one of her daughters to name this satellite. Dysnomia translates to Lawless One. It rotates around Eris once in 15.774 days and has a diameter less than 150km.

1The length of day is still tentative. Roe, Pike, and Brown reported a rotation period of 1.08 days which has here been translated into hours.2Astronomical Units (the distance from the Earth to the Sun).