Greek Myths - The Trojan War Content from the guide to life, the universe and everything 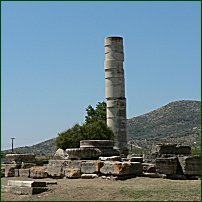 The Trojan war is considered a mythical war1. It centred around the city of Troy, which itself was thought to be mythical until archaeologists found it in excavations from 1870-1890 and 1932-1938.

According to tradition, the root of the war started with Eris, who was the Goddess of Discord and one of the followers of Ares, offering the 'golden apple of strife' for the fairest Goddess. She did this to create trouble, in revenge for being the only goddess not invited to the wedding of Peleus and the sea nymph Thetis2. The beauty competition was between Aphrodite, Athena and Hera and was to be held on the slopes of Mount Ida. When they got there, they found Paris, prince of Troy, tending some sheep. His father, the king, had been told by an oracle that Paris would one day be the ruin of Troy and he had sent his son to a remote mountain in an attempt to keep him out of trouble. However, when the company of Gods reached Mount Ida they decided that Paris should judge the beauty competition.

Each of the goddesses offered Paris a bribe to make her the winner. Hera offered him sovereignty over the entire earth, Athena offered him invincibility in battle, while Aphrodite offered him Helen, the most beautiful mortal. Paris chose Aphrodite, and she assisted him in abducting Helen from her home in Sparta while her husband Menelaus, king of Sparta, was away. Paris then carried Helen back to Troy - it is not known whether she was a willing captive or not.

When Paris's deed was discovered, the Spartans declared war on Troy. They were joined by many of the countries that made up what was then Greece. A ten year war followed, with the Greeks laying siege to Troy. Their hero, Achilles, was their greatest fighter and with his help the Greeks gained the upper hand.

However, the Gods started taking sides and they too joined in the battle, some being wounded by mortals but most of them causing lots of damage. Apollo joined with the Trojans. It was one of his lethal arrows which hit Achilles on the heel and killed Achilles.

The Greeks despaired, overwhelmed without their hero, until Odysseus had an idea - make a wooden horse. The Greeks built an immense wooden horse and hid their best warriors inside it. They then sent their spy, Sinon, into the city to convince the king that the gift would mysteriously protect Troy. Despite warnings from Kassandra3 and Laocoön4 the gift was accepted and wheeled into the city, where it stayed until nightfall when the warriors burst out of it, opened the gates to the rest of the Greek army, and ransacked the city.

Paris himself started to fight with Menelaus and would have lost miserably had not Aphrodite carried him off in a mist. However, he had been severely wounded by the archer Philoctetes and died before he could get help.

1There are speculations that it was based on reality.2Who would later be the parents of Achilles.3Who had been cursed by Apollo to always tell to the truth.4Who was later punished by the Gods who favoured the Trojans.