Greek Myths - Jason and the Argonauts Content from the guide to life, the universe and everything 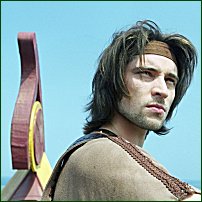 Almost as soon as he became king, Aenos, the rightful heir to the throne of Iolcus, was imprisoned by his half-brother Pelias, the son of Poseidon. After Pelias became king, he visited an oracle, which warned him that one of his relations would kill him and to beware a one-sandalled man. He acted immediately, putting every relation to death except for Aeson, whom he imprisoned in a tower.

Aenos had a wife, Polymele, who was heavily pregnant. When the baby was born Pelias meant to kill it, but Polymele commanded all her servants to spend the day weeping and in mourning, in order to make Pelias believe the child was stillborn. Then she smuggled the baby, Jason, out of the palace and took him to be raised by the Centaur Cheiron.

When Jason was fully grown he returned to Iolcus. He was about to cross the river into the city when he saw old woman, who was actually the goddess Hera in disguise, begging to be carried across the river. She was refused by everyone except Jason, who struggled across with her, losing a sandal in the mud. When he reached the opposite bank he was confronted by Pelias, who was alarmed at seeing the man with one sandal. When Pelias asked who he was, Jason revealed his identity and his claim for the throne.

Pelias was surprised, but consented to give up the throne, provided Jason could deliver Iolcus from a curse. He explained that many years ago, Jason's cousin Phrixus1 had fled from death on the back of a golden ram named Chrysomallus, given to him by Hermes. When he arrived safely in Colchis he sacrificed the ram to Zeus and Aeetis, king of Colchis, hung the fleece on a tree where it was guarded by a dragon that never slept.

Pelias wanted the fleece returned, either because it was their rightful property, or because Phrixus' ghost was haunting him because he had not had a proper burial, and would continue to do so until the fleece was returned. Jason agreed to do this, and sent messengers over the whole of Greece, asking for the 50 best men to join his crew aboard his ship, the Argo.

The Argonauts encountered many obstacles during their voyage. Early on they were forced to stop when Heracles' oar broke during a rowing competition. Heracles went to find a tree to make a new oar out of, but when he returned he found that his friend Hylas had gone to fetch water, and disappeared. Heracles went to search for Hylas, but never found him. He was so long away from camp that the ship left without him and so he continued his labours.

Next they reached Bebrycos, where the king refused them food and threatened them with death unless one of them met him in the boxing ring. Pollux consented to fight him, and although it was a difficult match he eventually killed the king. This enraged the men of Bebrycos, but the Argonauts easily defeated them.

When they reached Thrace they met Phineus, whom the gods had cursed with harpies2 who seized all his food. When asked for advice he first begged them to defeat the Harpies. The Argonauts chased them away, and in return Phineus explained how to navigate past the Symplegades and that they should trust Aphrodite once they reached the Colchis.

The Symplegades were rocks which had the power to move, crushing ships as they attempted to sail past. The Argonauts managed to get through without mishap by following the advice of Phineus, who had told them to first release a white dove. When the rocks touched the dove they became still, and the Argos was able to sail through unharmed.

When the Argonauts reached Colchis he asked Aeetes for the fleece. Aeetes consented, on the condition that Jason could harness two fire-breathing bulls made by Hephaestus, plough a field with them and sow the field with dragons' teeth. The task would have been impossible, had not Aphrodite instructed Eros to make Medea, the sorceress daughter of Aeetes, fall in love with Jason. She consented to help him if he would promise to be faithful to her forever, and he swore by all the gods that he would.

Medea gave Jason a potion that would protect him from the fire of the bulls, so they would become ordinary to him. Jason managed the tasks with ease, and even when the dragons' teeth he had planted sprouted into warriors he did not panic, merely throwing a stone in their midst to make them fight amongst themselves. Aeetes then intended to break his bargain, but Medea showed Jason the way to the fleece and gave him another potion to make the dragon sleep while he stole it.

When the Argonauts set sail for Iolcus they were pursued by Apsyrtus, son of Aeetes. He cut their return route off and eventually Jason agreed to leave Medea on an island where she would stay in peace until her case had been judged by the courts. However, Medea sent a message to Apsyrtus falsely claiming that she had been kidnapped, and so he rushed onto the island to save her. Jason followed and murdered him, and then he and Medea rushed back to the ship where the Argonauts attacked and destroyed the fleet Apsyrtus had commanded.

However, when they tried to set sail the ship herself refused to carry Jason and Medea, because of their treacherous murder. Therefore they crossed as much country as possible overland, arranging for the Argonauts to pick them up later in the voyage. They were met at Aeaea, where Jason and Medea married. The whole ship then had to sail past the Sirens, which was a dangerous undertaking but was accomplished by Orpheus' playing drowning out their enchanting song.

When they finally reached Iolcus they found that Pelias had forced Aeson to commit suicide. In revenge for this Medea confided in Pelias' two daughters that they could make their father young again. Then, through magic and slight of hand, she managed to make it appear that by cutting up an old sheep and boiling the pieces in a certain cauldron, she could make it young again. The daughters of Pelias were deceived and cut their father to pieces, killing him. Then Jason was free to take the throne.

After several years of marriage to Medea, and after the birth of two children, Jason fell in love with Creusa3, and divorced Medea, despite being reminded of the vow he had made her. Medea was angry but pretended to accept Jason's decision. She sent Creusa a robe as a wedding present but when the bride put it on it burst into flames, which burnt the entire palace. Jason was the only person to escape the fire.

Zeus was impressed with Medea's spirit, but she refused his advances. Hera was grateful and promised that if Medea sacrificed her children to her, they would become immortal. Medea did so, and then fled the wrath of Jason in a chariot pulled by two dragons. Jason despaired at the loss of his new wife and his children, and went to sit by the Argo. However, while he was in the depths of his misery, a beam fell from the ship, killing him.

1They shared Minyas as a grandfather.2Birds with women's heads.3Sometimes called Glauce.