Greek Myths - Achilles Content from the guide to life, the universe and everything 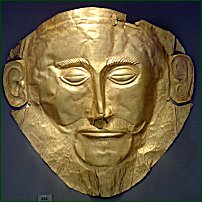 The Goddess Thetis was a sea nymph, so beautiful that the Olympians desired her, and even Zeus was tempted. However, an oracle told the Gods that the son of Thetis would be more magnificent than his father, and so the Gods shunned her - because they did not want to suffer a similar fate to Cronos, whose son Zeus conquered.

It was decided that Thetis must marry a mortal, and Cheiron the centaur suggested that a student of his - Peleus, King of Phthia - should marry her. She fled from him but was eventually captured and married to him. She had many children, and tried to make them immortal by dipping them in the Styx1 and then thrusting them into a fire. However, this killed all of them except her last-born, whose father saved him from the fire. The boy, Achilles, had only been dipped into the Styx, which succeeded in protecting him2, but since his mother had held him by the heel, that part of him was not protected.

According to legend, Achilles' escape from the fire was very narrow indeed, with his father pulling him out too late to save him from being burnt on the ankle. However, the Centaur Cheiron helped Peleus once again, by replacing the ankle bone of Achilles with one belonging to the Giant Damysos, a great runner. This was what gave Achilles his famous speed.

An oracle told Achilles that he was destined either to have a short yet glorious life, or a long and undistinguished one. Achilles chose the more noble course, and when the Trojan War began he joined the Greeks and was a tremendous fighter.

His most famous adventure, however, centres around an argument with his king, Agamemnon, during which he shunned the battle completely. Without his inspiring presence, the Greeks lost a great many men, and begged him to return. Achilles compromised - he would allow his best friend Patrocles to wear his armour, fooling the Trojans into thinking he was Achilles and losing heart.

However, the plan backfired, and Patrocles was killed. Achilles was so angry and upset that he rejoined the war, fighting more strongly than ever and killing the best Trojan fighter, Hector.

However, he was hated by Apollo, who was fighting with the Trojans in the great war, and who killed Achilles in battle by shooting an arrow at the only vulnerable part of his body - his heel. He then pursued Achilles' son, Neoptolemus, who was eventually killed at Apollo's oracle at Delphi.

1A magical river of Hades.2Some legends claims that Achilles was dipped into ambrosia.