Greek Myths - Sirens Content from the guide to life, the universe and everything 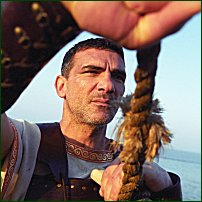 Contrary to popular belief, sirens and merpeople are not the same at all. Whether the merpeople legend evolved from the siren legend is uncertain, but they are very different beings.

Sirens were the daughters of the muse Melpomene. They were Pisinoe, Aglaope and Thelxiope, companions of Pesephone, who was carried off by Hades. The sirens begged Zeus for wings to enable them to look for her and consequently they became half woman and half bird. They lived on an island in the middle of the ocean, and would sing to sailors, luring them to be eaten. Once a sailor heard their song, he would be in their control. He would attempt to get as close to them as possible, steering the ship into the rocks and wrecking it.

In Greek legend there are two recorded cases of ships sailing past the sirens without mishap. The first was the Argonauts, who had the protection of Orpheus' music, which was more bewitching than that of the sirens and broke their spell.

The second ship to pass was the ship of Odysseus, on its way home from the Trojan War. Before they set sail they had been entertained by the Goddess Circe, the sorceress, who had warned Odysseus to make sure the ears of his crew were blocked with wax. She advised him that if he wanted to hear the sirens for himself, he should instruct the crew to tie him up and refuse to untie him until they were out of range. Odysseus obeyed, and spent that part of the journey tied to the main mast, enabling him to hear the beautiful song for himself.