Astronomical Units Content from the guide to life, the universe and everything 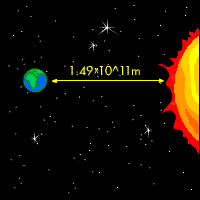 Simply stated, an astronomical unit is the mean distance1 between the Earth and the Sun.

The Astronomical Unit (AU) is what is known as a Natural Unit. It is a relic of the ancient days of astronomy when no one had any absolute measurements to any other object in the solar system. In those times everything was measured with relative units (eg Mars is 1.5 times farther from the Sun than the Earth is) and later, when absolute measurements were deciphered, no one wanted to give up this unit.

This unit is useful to get a sense of scale for distances that are tough to comprehend. Can you really imagine 1.49×1011m? Thought not. Neither can astronomers.