The Sun Content from the guide to life, the universe and everything 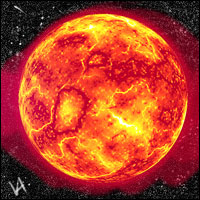 The Sun is our nearest star, and is sometimes called Sol1. It makes up more than 99.8% of the mass of the solar system, with most of the rest of the mass being in Jupiter. It has been worshipped as a god by many ancient civilisations, probably because the Sun is vital to life on Earth - without the Sun, the Earth wouldn't exist.

The Structure of the Sun

Our knowledge of the structure of the Sun is incomplete, and much of our present knowledge has been discovered very recently. Stars are opaque; it is impossible to see inside them using either visible light or other parts of the electromagnetic spectrum. It is possible, however to get a good idea of the internal structure of the Sun by analysing pressure waves (like earthquakes) travelling through it.

From the centre of the Sun out to 0.15 of the solar radius.

The core of the Sun is where energy generation takes place, using a process known as 'hydrogen burning', through which hydrogen is transformed into helium2. The temperature of the core is of the order of 107K.

The radiative zone is where high energy photons are generated in the nuclear transmutation of hydrogen to helium. Photons are absorbed and re-emitted every few millimetres. It takes more than 50,000 years for the photons generated here to escape from the Sun.

In this zone, mass motions transport energy. Convection currents move gasses of varying temperature around in this zone. Convection cells can be observed on the Sun's surface, as a granular effect. These cells are 2,000km across, and last for about ten minutes. The temperature of the convective and radiative zones is of the order of 106 to 107K.

This is a very thin layer, from which photons escape the Sun. It extends about 300km from the top of the convective zone.

This is a thin layer above the photosphere, in which hydrogen gas is excited. During a total eclipse of the Sun, a 'pink flash' can be observed from this layer3. The chromosphere is very much less dense than the photosphere, about one thousandth of the density.

The Sun's corona can be seen during total eclipses of the Sun. It is very hot gas, about 5x107K. It has a low density, and is heated by pressure and magnetic fields from deeper inside the Sun.

This is a stream of mainly protons and electrons, carrying a trapped magnetic field, which permeates space up to around 100AU outside the Sun. It is driven by pressure from the high temperature of the corona. The solar wind interacting with the Earth's magnetic field is responsible for Aurorae4.

The Sun is highly active; it has a very strong magnetic field that is thought to be responsible for phenomena such as flares and sunspots on its surface. The Sun's magnetic activity is driven by differences of rotation rate in the Sun. At the equator, the period is about 25 days while at the poles the rotation period is around 31 days. The amount of solar activity varies through a 22-year cycle. At the time of writing, we are near a 'solar maximum', a time when solar activity is at a maximum.

The Sun's Influence on Earth

The Sun provides all of the energy that we use on Earth, at the lowest level: through photosynthesis in plants. This energy then goes on to be transformed into all the energy we use5, be it by generating electricity, or in the energy we get from food.

The ultraviolet part of the Sun's light which falls on Earth is responsible for the life-threatening disease of skin cancer.

Readers are reminded that it is very dangerous to view the Sun directly. Looking at the Sun can cause blindness instantly, as it can burn your retina.

1The Latin for 'sun', which is where the name solar system comes from.2A simplification of the reaction, skipping several steps is 4p --> 4He + 2e+ + 2ne where p represents a proton, He is helium, e+ is a positron and ne is an electron neutrino (a neutrino is usually represented by the Greek letter nu).3This is due to the H-alpha lines of the Balmer Series.4A spectacular visual effect sometimes seen in the sky near the poles of the Earth. Also known as the Northern/Southern Lights.5With the possible exception of nuclear power.