Auroras - Polar Lights Content from the guide to life, the universe and everything 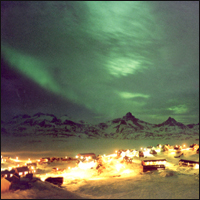 The northern lights are very mysterious. You have the sky full of these fantastic lights moving about and we have no clue. We don't know how it works, why it has the motion that it has. They have very beautiful colours. Usually a quiet aurora would be just a plain, green arc in the sky, but it can burst into colours of purple and pink at the low border with red on top of it.
– Research professor Dirk Lummerzheim of the University of Alaska Fairbanks.

Auroras are the result of the interaction between the Earth's magnetic field, its atmosphere, and the solar wind. The solar wind is made up of many charged particles, elements, and isotopes that are present in the Sun. These are ejected in events that are called coronal mass ejections. These are eruptions from inside the sun and appear as sunspots. As this wind reaches the Earth, it is deflected by our magnetosphere, an invisible shield created by the Earth's magnetic field, which protects us from such particles. However, at the North and South geomagnetic poles, the field lines go towards the Earth, like a funnel.

The particles follow the field lines down towards the Earth where they begin to ionise the molecules in the air - mainly nitrogen and oxygen. When these are affected they give off the light of the aurora; the colours directly relate to the element which is excited. This is the same process as the production of line spectra, in which the electrons give off photons of light as they drop energy levels in the atom.

Since the funnels exist at the Earth's poles, only very northern and southern latitudes usually witness auroras. Auroras in the Northern Hemisphere are called aurora borealis; auroras in the Southern Hemisphere are called aurora australis. It is certainly worth having a trip to witness the spectacle. However, the auroras depend on the sun, and the sun is not at all constant as it has an 11-year cycle of activity. In peak times there are vast numbers of sunspots produced and therefore more solar storms head towards us. This means not only that the aurora are more frequent but also are more violent, which is good news for anyone wanting to see them. They are often visible in middle latitudes, so that if you live around 50° North or South you may be able to witness these events from your own home. This occurred on Thursday, 6 April, 2000, when displays of aurora borealis were visible in Britain and in the United States as far south as Alabama. The year 2001 was the peak of the 11-year solar cycle, so the next peak will occur in 2012.

However, we are not perfectly safe from the solar wind. It can wreak havoc with some Earth and space systems, such as power production. There is the famous case in Canada in 1989, when large amounts of the power grid were disrupted and massive blackouts resulted. Satellites have been put out of service, so they are now occasionally aligned to escape from the worst of the storm. Radio reception is also affected, but to the advantage of some. Auroras affect the Earth's ionosphere, where the particles are ionised; this acts to reflect radio waves which can allow radio amateurs to send their signals further than is normally possible.

Some auroras are sub-visual which means they cannot be seen by humans. How do we know they exist then? The way the human eye works, accumulating light for only a fraction of a second at a time, means we miss some phenomena. A camera shutter works in a different way; it can be left open, revealing something otherwise invisible to us. One lucky tourist took a photograph of the skyscape over distant mountains in Juneau, Alaska, attempting to capture the image of a comet. When the picture was developed, not only was the comet's tail visible, but the whole scene was bathed in green light from a sub-visual aurora, made even more stunning by the reflection off a frozen lake.

When are Auroras Likely to Occur?

The Geophysical Institute of the University of Alaska Fairbanks give up-to-date Aurora Predictions. Select your country and it will be orientated for your location.

There is also the Space Environment Centre, which can provide up-to-date forecasts. Space Weather has real-time pictures and graphs of the auroral activity.