Pink - the Diva Colour Content from the guide to life, the universe and everything 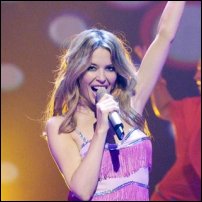 I am the very pink of courtesy.
- Mercutio: Act II Scene IV of Romeo and Juliet by William Shakespeare.

Pink is a fabulous diva of a colour. A study published in 2007 by researchers in Newcastle claimed that an evolutionary preference for pink helped women find ripe fruit and healthy men. 'In the pink' is a euphemism for being healthy, it has nothing to do with your bank balance. To be 'tickled pink' is an expression meaning highly amused. The inside walls of police holding cells are sometimes painted pink because of its calming influence. Pink used to be the girly girl's colour of choice, but nowadays just about anyone can get away with wearing it, even redheads.

A Fan of Pink

Someone who was never seen in public wearing anything but pink was author Dame Barbara Cartland (1901 - 2000). The step-grandmother of Diana, Princess of Wales was outspoken on subjects such as divorce and infidelity even though she herself had not led an unblemished life. Dame Barbara describes how she fell in love with pink:

I was shown round Tutankhamun's tomb in the 1920s. I saw all this wonderful pink on the walls and the artefacts. I was so impressed that I vowed to wear it for the rest of my life.

The great composer Richard Wagner was in touch with his feminine side, taking control of ordering clothing to specific requirements to such a degree and display of knowledge that it's possible the attire was for himself. A letter written in 1877 to a seamstress found its way into the hands of a journalist, who published the juicy morsel:

...velvet drapes and portières, silk and satin shirts and underwear...

causing quite a scandal at the time. Another letter surfaced, which had the postscript: I hope the pink drawers are ready too??

Queen Victoria owned several pairs of pale pink silk stockings which are rotationally displayed in museums. Ed Wood was also a fan of pink undies and is said to have worn them under his military uniform while in the service.

Penguins are birds which have lost the ability to fly, and are faster swimmers than most fish. Adelie penguins have pink feet. Gentoo penguins have orange feet, but their poo is pink.

The ultra-cool cartoon character Pink Panther started off introducing the credits to the 1963 film The Pink Panther starring Peter Sellers in his famous role as Inspector Clouseau. In the film, the 'pink panther' was a fabulous large pink diamond. The end credits, coupled with the catchy Henry Mancini jazz music, were so popular that the cartoon Pink Panther eventually got his own TV show. Starring himself in his trademark smoking jacket and guest starring a cartoon Inspector Clouseau, one episode, The Pink Phink, won an Oscar for Best Animated Short Film in 1964.

Pigs get bad press, just because they eat other people's cast-offs like potato peelings and they're pretty low down on the food chain, doesn't make them any less valuable. Pigs provide us with bacon, gammon and ham. Someone who might not want to eat a pig may consider having one for a pet, like Hollywood actor George Clooney. Heart-throb Clooney's pet pig wasn't pink though, 'Max' was a Vietnamese black-bristled pot-bellied pig, which shared Clooney's home for 18 years until it died in 2006.

The piglet in the film Babe was pink, although they actually got through lots of pink piglets because they grew too fast for continuity.

Children like to save their pennies in a pink pottery pig-shaped money box called a 'Piggy Bank'.

Possibly the most famous pig on the planet is the megastar Muppet character Miss Piggy. A notorious flirt with male guests like John Denver, she nevertheless saw off any competition should any other female get a little too close to the love of her life, 'Kermy' - Kermit the Frog.

Winnie-the-Pooh has a friend called Piglet, and another children's story is The Three Little Pigs.

The band Pink Floyd named themselves after two blues musicians, Pink Anderson and Floyd Council. Douglas Adams once joined them onstage at a concert in Earl's Court, London. Such a popular band deserves their own oxygen of publicity and here are their h2g2 entries:

Alecia Beth Moore was born on 8 September, 1979, an American singer-songwriter who, under the stage name P!nk, has sold over 25 million albums and won two Grammy Awards up to 2007. She is a vegetarian and supports PETA (People for the Ethical Treatment of Animals). P!nk has written to Prince William to complain about his shooting parties and hunting, and Queen Elizabeth II protesting about the use of real bear fur for the bearskins (headgear) of her guards at Buckingham Palace.

A pink triangle patch was first used in Nazi Germany to identify homosexual men in concentration camps. It has been used as a gay pop icon since the early 1980s.

There was once a time when a heterosexual man wouldn't be seen dead wearing pink, as it's long been viewed as an effeminate colour. Nowadays it's not unusual to see the local TV weather forecaster wearing a shocking pink shirt, or even David Dimbleby presenting a BBC programme similarly attired.

In May 2006, shoppers in Birmingham were treated to the sight of a large retail store floodlit in pink to celebrate the city's 10th Birmingham Gay Pride festival.

The smallest finger on each hand is commonly known as the 'pinkie'. To a palmist this digit is known as the 'mercurial finger' and according to folklore, the number of lines below it was indicative of the number of children a woman was likely to bear. Other names for it include the 'ear finger' - possibly because it's the perfect size for fitting inside the ear and dislodging any ear wax, but this isn't encouraged due to the possibility of pushing the wax further in, and possible brain damage.

Pink is the colour of Breast Cancer Awareness ribbons, and the ASDA charity clothing range. Wear It Pink is a charity which promotes wearing something pink on a given day and the donation of £2 to raise funds for researching the cure for breast cancer.

Semi-precious stone Tourmaline is pyroelectric (it will draw ashes toward it when warmed). It comes in assorted beautiful, vivid colours, and Watermelon Tourmaline, which is green outside and pink inside, is very popular. Tourmaline is the birthstone for October.

Rose quartz is used in crystal therapy to promote love, chakra balance and bodily healing. For those who don't believe in such things it's a pretty mineral which can be fashioned into jewellery.

A true Elvis impersonator would have to own a pink Cadillac to be just like their idol. Lady Penelope Creighton-Ward (M'Lady) owned a pink Rolls-Royce with the number plate 'FAB 1' in the popular 1960s  children's   TV show  Thunderbirds Are Go, although it was almost always driven by Parker, her rough diamond chauffeur.

Shirley Muldowney AKA the 'First Lady of Drag Racing' famously drove a pink dragster while winning three championships in 1977, 1980 and 1982. With some diligence, Mary Kay consultants can earn the use of a 'Mary Kay Career Car' which is always coloured pink.

Pinking means to edge something to prevent fraying, unravelling or just for decoration. There are special implements called pinking shears, which have an inside edge that is saw-toothed, so you just have to cut the edge of the cloth or paper like you would with a pair of scissors. You end up with an hem that is pinked.

Things That Shouldn't Be Pink

'Pink disease' (medical names: acrodynia, erythroedema, erythromelalgia) is a severe illness of children of the teething age, marked by pink cold clammy hands and feet, heavy sweating, raised blood pressure, rapid pulse, and photophobia. Affected infants are very prone to secondary infection, which may be fatal. The condition may be an allergic reaction to mercury; it has virtually disappeared since all mercury-containing paediatric preparations have been banned (except thimersol which is a mercury compound used in vaccinations).

'Pink eye' is a common name for the eye infection conjunctivitis.

There's No Pink in the Rainbow

A rainbow is produced when sunlight is refracted through water droplets (eg rain, mist or even sea spray). It forms an arc of angular radius between 40° (blue) and 42° (red). There's no pink in the spectrum because it's a non-spectral colour; red is there but it has been split from the white, pink is made by mixing red and white. So why then, in the words of the 1966 hit song 'Sing A Rainbow' by Cilla Black (birth name Priscilla White), does this line appear?

Red and yellow and pink and green...I can sing a rainbow...

Who says pop songs have to make sense anyway, but it's very confusing for autistic people who remark upon hearing the song on the radio: ..but there's no pink in the rainbow!

1'Seeing pink elephants' is an expression meaning that one is experiencing delirium tremens, hence the reference to champagne and hallucination.2From the Greek words Dios meaning 'God' and anthos meaning 'flower'.3A medication derived from barbituric acid, used as a sedative, anti-convulsant or for anaesthesia.