Teddies and 'Real' Bears Content from the guide to life, the universe and everything 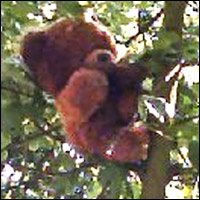 Bears as toys have been with us for some time now, ever since that incident with a US president and a bear hunt1. In fact, said President, Theodore (Teddy) Roosevelt, gave his name to the teddy bear. They were immensely popular in Edwardian Britain and have continued to go in and out of fashion ever since.

You might think that teddy bears can come in an infinite number of shapes, sizes and colours. They can't. Draconian as this may seem there is in fact a great difference between cuddly toys which happen to be shaped like bears and what we shall call real bears or proper bears.

What Is a Real Bear?

A real bear, in this context, is a teddy bear with standards. There are two essential things to know about real bears. They have a great deal of dignity and they are charming. Charming, in the context of bears, is not the same thing as cute, though these qualities are sadly often confused by manufacturers. We can gain a better understanding of what a real bear is and is not by looking at some of their attributes.

Real bears come in a great range of colours. Classic real bears usually mirror the colours of live bears, browns and honey colours, particularly, but also black and white. Grey is also a perfectly satisfactory colour. Real bears are almost never brightly coloured. Green, pink and other vivid shades are, generally, lacking in dignity and are therefore unsuited to the real bear. The exception to this rule is the colour blue, particularly sober blues. Blue bears can be charmingly solemn and are thus more likely to be real bears than their bright pink counterparts.

There is no hard and fast rule concerning the size of a real bear. Occasionally when bears are made in very large (over two feet) or very small (under four inches) sizes it is for reasons of cuteness or gimmickry. Cuteness and gimmickry are not attributes of the real bear.

There are a number of classic forms which the real bear will often take. Two central elements should be noted in this area: posture and joints. The posture of a bear can be either sitting or standing. Neither is inherently more real than the other. Similarly bears can be jointed, meaning that they have moveable joints and poseable limbs. In the real bear these joints should only occur in the shoulder and hip, sometimes the neck, but never anywhere else. Real bears do not have jointed elbows or knees, fingers or toes. In unjointed bears there is a great variety of form. Bears can be overstuffed, being firm and solid to hold and tending to be inflexible. They can be floppy, in a similar manner to rag dolls, in which case they will be soft and flexible. The real bear sits somewhere between these two extremes of the spectrum. Real bears, whether standing or sitting, jointed or unjointed, floppy or firm, should not be posed in an unnatural manner at the point of sale. Unnatural poses could include waving, holding extraneous objects or performing an activity. These postures interfere with the freedom and naturalness of the real bear.

There is a great range of emotion and temperament that the real bear can exhibit. Real bears can be grumpy, happy, puzzled, shy, gregarious and a great deal more. There are, however, some attributes with which the real bear is particularly associated. Real bears are very often solemn, dignified, loving, thoughtful and patient. Equally there are some qualities which go against the essential nature of real bears, such as excessive cheerfulness, excessive bad temper, stupidity or buffoonery (which should be distinguished from naivety and innocence) and cynicism.

Real bears can be clothed, though there are limitations on what a real bear should wear. Scarves and simple jumpers are perfectly acceptable, particularly if they are in suitably respectable shades. Real bears should not be dressed elaborately. Suits, wedding dresses and other costumes lack dignity and restrict the personality and freedom of the bear. Bears in costumes can, however, be bought and liberated from their clothes, provided they are not sewn into them. Other accessories can be worn, a neck bow for instance can greatly enhance a real bear's charm. There are no hard rules in the area of accessories, but ornamentation which is gaudy or undignified should be avoided.

The idea of real teds has been around for a long time, and most children imagine that their teds move around and live when they are not watched. This idea was solidified by Margery Williams in 1922, in her book The Velveteen Rabbit. Which is, as the title suggests, about a toy rabbit who becomes real. Teds become real with time and love, and bears have a special propensity for becoming real. Perhaps this is because they are so widely loved as a class of teds, or perhaps because they are just special. Because of this tendency towards realness, bears have attracted several groups of people who are especially devoted to them.

Collectors of bears come in different types, just as bears do. Some collectors specialise in antique bears, of specific makes, particularly Steiff. And some are rather more indiscriminate. You would be forgiven for assuming that collectors, as a group, are more likely than most to appreciate real bears. Unfortunately many collectors fundamentally miss the point where bears are concerned. All too often bears which are marketed as 'collectable' are both cute and overdressed. Collectors also, by definition, prefer to acquire many bears and to display them on shelves and in cabinets. This is not a happy environment for a real bear.

Bear Friends are very different to collectors. They do not care about the commercial value of a given bear and they do not usually find it necessary to gather together large numbers of bears. Some bear friends may not own any, preferring to read about them and love them in a more general fashion. Most bear friends will, however, share their lives with at least one bear, and sometimes many. Some are even collectors. What distinguishes the bear friend from the collector is the attitude towards the bear and its realness. Bear friends love bears, they appreciate their charm and shy wisdom. They usually have an appreciation of the realness of their bear and bears in general, and would not dream of treating them as though they were objects.

You and Your Bear

The relationship between you and your bear can, in time, develop into a close and fulfilling bond. Bears, unlike partners or friends, never judge, always listen and won't tell. They are also snuggly and comforting, and in cold weather, the larger bear will double nicely as a hot water bottle substitute.

Choosing the Right Bear for You

Once the delights of being a bear friend have become obvious to you, you will, of course, want a bear of your very own. It is important that you do not rush out and buy the first bear that you see. Consider your reasons for wanting a bear and think of what type of bear will best suit your needs. If you want a bear to cuddle at night, one of the larger softer type will probably suit you best. If your bear is intended as a travel companion, a smaller bear with easily cleaned fur might be preferable. Once you have a firm idea of the approximate type of bear you are looking for, it is time to hit the shops and seek him out. Don't be afraid to hold a bear you are considering, walk around the shop and get to know him, even talk to him, but if you do, try to talk quietly.

If you find a bear and instantly know its name then you have found the right bear.

Caring for Your Bear

Bears are not created real. As with other teds they become real with love and time. As a bear friend it is up to you to provide the love and attention your bear needs to become real. This does not mean that an intensive amount of attention needs to be paid to your bear. A small amount of attention every day will be far more beneficial than a large amount of attention once a month. Real bears need very little physical maintenance. They should never be put in a washing machine and even hand washing should be kept to a minimum. Most real bears will, sooner or later, end up looking rather battered. This is a badge of honour for the real bear and should not be avoided.

There is some debate about whether Rupert the Bear counts as a real bear. He wears an outfit, has elaborate adventures and is occasionally twee. It has been argued that he is really a boy in a bear suit. But he is loved by a great number of people and for that reason he deserves to be recognised as real, if not as a real bear.

Rupert wears a red top with yellow and black checked trousers and scarf. He has featured in a comic strip in the Daily Express since 1920. He was created by Mary Tourtel, who retired in 1935 and the work was taken up by Alfred Bestall for the next 30 years. The comic strip led to Rupert annuals and a range of other merchandising, cartoons and books.

Paddington Bear was found at Paddington station by the Brown family. He is a small brown bear with a red rain hat and blue duffle coat. He carries a brown suitcase and is from Darkest Peru. His favourite food is the humble marmalade sandwich, which he carries round in his suitcase and under his hat. Paddington was created by Michael Bond.

If you would like to know more about Paddington check out this entry on Paddington's London.

Winnie the Pooh is the most famous and best loved bear in the world today. He is a short, stout, honey-coloured bear. His favourite food is honey and he also likes condensed milk. He was the friend of Christopher Robin Milne. In winter he wears a red coat. AA Milne wrote two books about him, Winnie The Pooh and The House at Pooh Corner.

If you can read the last chapter of The House at Pooh Corner without crying you are not a bear friend.

Places to Visit Where you Will Find Bears