The Adelie Penguins - Pebbles For Payment Content from the guide to life, the universe and everything 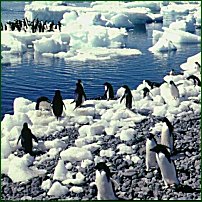 Aren't penguins cute? With their comical Charlie Chaplin walk, tap-dancing routines and body-popping antics, they are a favourite with everyone visiting zoos around the world. Cartoons and feature films have been made about them and no wildlife documentary series is complete without a cameo from our little chubby friends. So endearing are they that many people casually anthropomorphise penguins, giving them human traits and characters.

In many ways, the social behaviour of penguins is similar to that of civilised people. Both parents share the duties of raising the young, mating is believed to be for life and they enjoy playing in the surf and eating freshly-caught fish.

The most famous penguins in the Antarctic and certainly the media tarts are the King and Emperor penguins. Known by their colourful plumage and savvy entertainment agents, these are the penguins that are most highly prized for celebrity endorsements for everything from windows to biscuits. Less well-known are the smaller and more innocuous Adelie penguins; however, aspects of their behaviour are even more fascinating and bear a striking resemblance to some of our own.

The first thing people notice about the Antarctic is that it is white. Very white. Snow and ice combine to create an almost featureless terrain. This is caused by the second thing most people notice about the Antarctic - the cold. It's cold down there near the South Pole, really cold. When the penguins are gearing up for the mating season, creating a shelter for themselves and any offspring is of paramount importance, so the males arrive at the mating grounds early to start making nests. They begin by scraping out a hollow in the ice and then start looking for materials to line it with. Any penguin that's spent too long watching how other birds do it in wildlife programmes is going to be a bit disappointed. There aren't a lot of trees in the Antarctic to supply leaves and twigs. In fact, there aren't any. The nearest tree is in Chile, hundreds of miles away and a bit of a commute when you can only carry a small beakful at a time, so the Adelie use the only other natural resource available to them - pebbles. Gathering up small stones and pebbles scattered on the ice, they line the ice hollows to make a nest. A few judiciously-placed feathers to soften the sharp edges and things are looking good. However, as the Adelie place their nests close together, a male going off in search of pebbles may return to find his neighbours have pinched stones from his nest - but as he does the same to them when their backs are turned, it all evens out in the end.

The females arrive fashionably late to find their mates in a state of paranoid anxiety, unable to go off for more stones for fear of the Joneses next door, yet with the nests not quite complete. It is left to the females to add the final pebbles while the male stands guard.

So off the females go, having to search further and further afield for stones. While they are away, the straggler female Adelie continue to arrive at the nesting ground. Many of these laggards will be younger, less fit birds who are still unattached. Spying a healthy-looking male with a nice nest, they will quite often dive in and hope for a bit of 'how's your father' and dream of the pitter-patter of tiny webbed feet. However, if the returning female discovers them, it is far more likely she will feel the pitter-patter of a sharp beak as the outraged spouse re-asserts herself.

There are, of course, a lot of young single males around. The female Adelie, when selecting her mate, assesses the fitness and body weight of the prospective partner. The male, after all, will have to stand guard on the eggs and keep them warm during the incubation period, so the females are looking for podgy partners with sufficient paunch to see them through the long, cold days ahead. But, being blokes, the young males don't want to miss out on any mating that might be on the go so they have developed a cunning ruse.

During the initial melée in the hunt for stones, the young males collect a cache of their own, even though they do not intend to build a nest. Instead, they position themselves slightly away from the nests, close enough that the females searching for pebbles have to pass them. As the females approach, their eyes scanning the ice for pebbles, the young males will invite the females to 'get their rocks off' to get some rocks off them.

It is at this point that, faced with the prospect of a long hunt for pebbles in the cold, some females are tempted. The young males' area thus becomes the biggest red light zone in Antarctica for a while as trysts are made and payments exchanged. Many females will make their way over to the young males and begin flirting, often ending up prone on the ice with their pleasures on display. If a young male accepts the invitation, the female will collect a pebble as payment after the nefarious deed is done and return to her waiting partner at the nest who is none the wiser, or at least seems unperturbed.

Researchers have also witnessed the über-flirt type of females who will go through the same flirting routine as the others but, when a male makes a move, will swiftly grab a pebble and beat a retreat. The young males do not seem to mind this if the preceding show was satisfactorily stimulating. Indeed, some females have been seen to tease in this way up to 60 times with the same males.

It certainly brings new meaning to p-p-p-pick up a penguin.