Basic Tap Dance Steps Content from the guide to life, the universe and everything 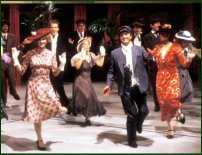 Tap dancing is a form of dancing, widely enjoyed by amateurs, professionals and audiences. It can be practised by a wide range of people, young or old, and it is even possible to perform wheelchair tapdancing. Many people have been inspired to begin tap dance lessons by watching celebrities, such as Fred Astaire and Ginger Rogers, on film. Tap consists of a set of basic steps combined to form compound steps and amalgamations. These grow and become more difficult as you advance.

The following table gives some basic steps with their descriptions. This table is by no means complete or definitive, but it is good as a rough guide or reference. Different people use different terms or the same terms differently but they will normally give you a demonstration of what they mean. A few of these can be a little dangerous so exercise caution1. Note that a 'beat' is any time that a sound is made with the tap shoe.

A tap shoe consist of a shoe with a plate of metal at the heel and a wider one across the ball of the foot into the toe area. Therefore, references to the heel mean the heel plate of metal, while references to the toe mean the front edge of the front metal plate; whereas the ball is the whole of the front metal plate. When commencing tap lessons there is little point buying expensive shoes, but as a dancer's ability increases, more expensive shoes may be wanted.

The basic steps in this list can be combined and recombined in a vast number of ways, most notably with the shuffle, which gives shuffle-hop-step (which normally moves backwards to free the other foot); shuffle-ball-change; even shuffle step. These are then used as building blocks for bigger steps. A time step is a notable example, with a basic (or single) shuffle time step being shuffle hop *pause* spring tap step step.

These basic steps are not only combined however; they are also modified, usually by adding beats or altering the rhythm. For instance, a three-beat shuffle is when the heel strikes the ground as the middle beat. The shuffle is also used to make the double shuffle, which is two shuffles in an evened-out rhythm - ie, instead of something like this: ..|.|.....|.|... you will have ...|..|..|..|... You may notice that a double shuffle is purely two shuffles run together2. More shuffles placed together in this way are uncommon, probably because the dancer and the audience start getting bored.

As you become more advanced at tap dancing there are named steps, some of these are in the above table, most notably the 'cramp roll', which could just as well be called the 'spring-step-heel-heel'. There are others, including time steps and closework. Wings, ripples and riffs fall into similar categories. At this point it is worth mentioning that separate steps tend to have slightly longer pauses between them than those within the steps, except when combined to form named steps3.

The simplest of the changes made to these named steps is the increase (or decrease) in the number of beats. For example, three beat 'wings' or 'ripples' are changed to make the four beat versions by adding a 'heel' on the end. Then you have 'riffs', which are idiomatic and follow no logical sense: A three-beat 'riff' is the 'riff' itself followed by a 'heel' on the supporting leg. In practical demonstration this means that standing on your left leg, you draw your right leg back and then swing it forwards in such a way that the ball strikes, then the heel, in a smooth movement. You then lift up your left heel with the right leg still in the air, and bring the left heel down in a natural continuation of the rhythm, which should be even. Then, logically enough, you have a four-beat riff as a riff followed by a heel-step; an extension only upon the idea of a riff, not on a three-beat riff.

'Time steps' are perhaps the most complex combinations, characterised by a 'hop spring' in the middle. For instance, the basic 'time step' is just hop spring tap step step4. 'Time steps' then progress by two independent means: with additions before the 'hop step' or with additions between 'hop step. A basic 'shuffle time step' is a basic 'time step', with a 'shuffle' on the front5, and a 'double time step' includes a 'hop tap-spring'6.

Tap is normally performed with a broad grin, as if the dancer is enjoying dancing, whether or not they actually are...7. There is a characteristic posture for performance, with bent knees, the back held straight but tilted forwards and the weight tilted forwards so that the shoulders, knees and the balls of the feet are in a near-straight line. The head is held to look out at the audience and the motion should be smooth. In most steps the head should not move, which gets difficult. All of these vary to some extent according to style, and the arm movements are governed almost entirely by style.

Without a proper teacher you can hurt yourself in a variety of interestingly painful ways, including broken bones. It is difficult to imagine any viable way to teach a rhythm to somebody without being in their physical presence. Tap dancing is a very popular form of dance and most dancing schools will have adult classes. Schools often provide tap lessons, as do some gym clubs.

1The author and the BBC take no responsibility for broken ankles2You can see this by putting two together like this: ...|..|..|..|......|..|..|..|...3Named grouped steps become one large step.4Seemingly a 'ball change', this is not described as one because the steps are on separate beats and the second step is taken behind the first (forward-back)5shuffle hop spring tap step-step6shuffle hop tap spring tap step step7Dancers have been known to perform with broken toes!