Fred Astaire - Dancer and Actor Content from the guide to life, the universe and everything 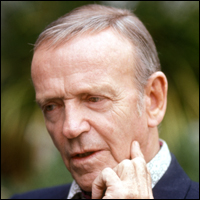 You see, every once in a while I suddenly find myself dancing.
- Fred Astaire playing Jerry Travers in the film Top Hat

Fred Astaire was a dancer, actor, singer and choreographer who graced the 'silver screen' era of movies.

Putting on Those Dancing Shoes

Born 10 May, 1899, in Omaha, Nebraska, Frederic Austerlitz was the youngest child of Frederic E Austerlitz and Ann Geilus Austerlitz. The Austerlitz family later anglicised their name to 'Astaire' with the start of the First World War. Older sister Adele was passionate about dancing and in 1904 the family moved to New York so that she could enhance her education as a dancer.

It was in New York that Astaire discovered two passions, one for horses and the other dancing. He'd go missing in the afternoons, his mother recalled, visiting places which were significant to horses. He knew all there was to know about them, their riders and the owners. He even kept a form book.

Despite his love for horses, he joined the Alvienne School of Dance and Ned Wayburn's Performing Arts school. He made his debut vaudeville performance alongside his sister in Keyport, New Jersey, in 1905, dressed as a groom. The children then toured the Orpheum circuit with an act called 'Juvenile Artists Presenting an Electric Musical Toe-Dancing Novelty'. Astaire's mother was his tutor while he was on tour and when he wasn't, he attended a public school in New Jersey. In 1917, the young adults made their Broadway debut in Over the Top, which led to them participating in a myriad of other revues. Then in 1922, brother and sister found themselves no longer just dancing in musicals, but also singing songs such as those of George and Ira Gershwin in For Goodness' Sake. They appeared together in the films Funny Face, Lady, Be Good! and The Band Wagon.

In 1932, Fred's dancing career looked rocky as his sister, who was believed to be the better dancer of the two, pulled out of the partnership and married Lord Charles Cavendish. Luckily that same year, Astaire found a new partner in the form of Claire Luce and together they appeared in Cole Porter's comedy musical Gay Divorce. Studio moguls in Hollywood also saw that Astaire had potential for acting in their films and persuaded him to do screen tests. One studio reported: Can't act, can't sing, balding, can dance a bit. Despite this Astaire was offered a contract by RKO's David O Selznick.

Selznick loaned Astaire out to MGM where he appeared in Dancing Lady (1933), and was introduced by Clark Gable as the dancer from New York. He also went to work in London, where he toured with Gay Divorce. Then RKO offered him a part in the film Flying Down to Rio, which led Astaire to find his new dance partner in the form of Ginger Rogers.

He gives her class, she gives him sex appeal.
- Katharine Hepburn on Astaire's relationship with Rogers

These films reflected the fact that Astaire was not just a good dancer, but a fantastic choreographer too. He would spend months working alongside RKO dance director Hermes Pan to deliver new, innovative, tap and ballroom dance routines. He was even nicknamed 'Moaning Minnie' by his sister.

During the filming of Top Hat, Ginger Rogers wore a dress that had decorative feathers. However, as she danced, some feathers came away from her dress and Astaire and their dance composer feared that this would distract from the footwork and the filming would have to be redone. The composer and Astaire also made up a song about feathers to the song 'Cheek to Cheek', and began calling Rogers 'Feathers' - much to her upset. Astaire later bought her a gold feather charm to add to her bracelet as an apology for his behaviour. When The Story of Vernon and Irene Castle was released in 1939, it was clear that their audience were looking for something new, and Astaire and Rogers decided to go their separate ways.

During the 1940s, Astaire found himself no longer bound to a contract with film company RKO and was able to act freelance at a number of different studios and work with a variety of different people. One person who Astaire found an affinity with was actress Rita Hayworth, whom he appeared alongside in You'll Never Get Rich (1941) and You Were Never Lovelier (1942). He also danced alongside Lucille Bremer, Judy Garland, Betty Hutton and Barrie Chase and men like Bing Crosby were also content to dance beside him.

In 1946, Astaire announced that he was going to retire from making movies and work on providing dance schools, but he was prompted out of retirement when he was asked to replace Gene Kelly1 in Easter Parade (1948).

Astaire then obtained a contract with Arthur Freed at MGM enabling him to do more films and was reunited with Ginger Rogers in The Barkleys Of Broadway (1949). During the 1950s, Astaire danced with Vera Ellen in Three Little Words (1950), Jane Powell in Royal Wedding (1951), and Cyd Charisse in The Band Wagon (1953). He then worked on the film Daddy Long Legs, which was released in 1955.

Astaire married Phyllis Livingston Potter in 1933. They had two children2, Fred Jr, born in 1936 and daughter Ava, born in 1942. During the filming of Daddy Long Legs, Astaire's wife fell ill with cancer and died, leaving him devastated. However, he was determined to complete the film in a professional manner.

My nephew had brought it up to the house and it intrigued him. Had the craze started earlier, I know he would have worked a routine around it; but unfortunately skateboards just didn't come around soon enough for him.

Unlike her father she did not inherit the talent for dancing:

I think Daddy would have quite liked it if I'd been a performer, but I've never even been able to touch my toes. I'm a klutz. He was a real perfectionist and he hated social dancing where he would have to dance with the hostess; it made him self-conscious. I danced with him in a father-and-daughter waltz when I came out as a débutante. But he was very hard to dance with, at least for me anyhow - he was more used to a partner who knew what she was doing.

Return to the Big Screen

His appearances on television did not stop him from keeping up his career as an actor though and he received a Best Supporting Actor nomination for his appearance in The Towering Inferno, which was released in 1974. He was reunited with Gene Kelly in 1976, while filming That's Entertainment, Part II. The last film featuring Astaire, Ghost Story, was released in 1981.

In 1950, Ginger Rogers presented Astaire with an honorary Oscar on behalf of the Academy of Motion Picture Arts and Sciences, for his unique artistry and his contributions to the technique of musical pictures. An Evening With Fred Astaire (1958) gained him nine Emmy Awards, followed soon after by the release of his autobiography Steps in Time in 1959. Astaire went on to obtain the Kennedy Center Honours in 1978 and the American Film Institute's prestigious Life Achievement Award in 1981.

In June, 1980, Astaire married his second wife, Robyn Smith, a former jockey who shared his passion for horses. She was 45 years his junior. Fred Astaire died in Los Angeles, California, on 22 June, 1987, aged 88 years. The cause of death was pneumonia.

What They Say About Him

No dancer can watch Fred Astaire and not know that we all should have been in another business.
- Ballet dancer and choreographer Mikhail Baryshnikov

What was so extraordinary about Astaire was his musicality, his agility. He was music in motion. He invented his own rhythm; he imposed his own musicality, as if he wrote another instrument into orchestration.
- Ballet dancer Rudolf Nureyev.

He had style. His clothes were always very casual and terribly, extremely elegant, because he had such taste. Was he good-looking? I think so, because charm is the best looking thing in the world, isn't it?
- Actress Audrey Hepburn.

He was determined to succeed in his career, nobody could duplicate Mr Astaire's ability, but what I never stop trying to emulate is his total discipline, his absolute dedication to every aspect of his art. He rehearsed, rehearsed, and rehearsed some more, until he got it just the way he wanted it.
- Singer Michael Jackson.

1Kelly had broken an ankle while playing touch football.2Phyllis had a son, Peter, from a previous marriage.