Bing Crosby - Singer and Actor Content from the guide to life, the universe and everything 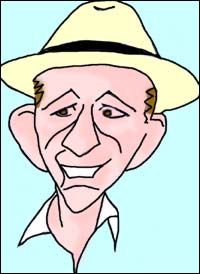 On 3 May, 1903 Harry and Kate Crosby of Tacoma, Washington State, were blessed with the fourth of their seven children. They named him Harry Lillis, although he soon gained the nickname Bing after a favourite comic strip: The Bingville Bugle.

Bing's interest in performing began at school, where he was involved in plays and choir recitals. He joined his first band - The Musicaladers - at high school, although at this stage in his career he was a drummer, largely because he couldn't read music.

After leaving school, Bing went on to study law at Gonzaga University in his parents' new hometown of Spokane, also in Washington State. Although his parents were keen on him completing his studies and qualifying as a lawyer, Bing was far more interested in continuing his musical career as a drummer and singer. He and his band's pianist, Al Rinker, dropped out of college in 1925 and headed for Hollywood.

Bing and Al's break came in 1926 when they were signed by bandleader Paul Whiteman. They were joined by Harry Barris, another singer, and became The Rhythm Boys. The band's first record - 'I've Got the Girl' - was released later the same year.

While performing with The Rhythm Boys, Bing made his first film appearance in The King of Jazz. He was due to sing solo, but was arrested for drink-driving the night before. Whiteman, suitably disgusted with Bing's behaviour, fired The Rhythm Boys as soon as the film was complete.

The group went on to work with bandleader Gus Arnhem, who began to push Bing into appearing as a solo singer. In 1931, Bing recorded his first solo record: 'I Surrender, Dear'. Bing was still having problems in his private life, and he began to miss performances. When he was sacked, he threatened to take his band with him, but the involvement of the local musicians' union meant that The Rhythm Boys were forced to disband.

Fortunately for Bing, his vocal style - crooning songs gently into the microphone rather then giving then everything in the typical vaudeville fashion - had already won him some important fans. Producer Mack Sennett1 signed him up to make six short comedy films. With his brother Everett as his agent, Bing's success grew. In 1932, Everett sent a recording of 'I Surrender, Dear' to the president of the CBS radio network. He was immediately signed up and began a radio career that was to see him consistently top the ratings for the next 20 years.

During his career, Bing recorded around 2,600 songs and may well be the most successful musical artist of all time. At the time of writing, Bing holds the world record for the most hits by a solo artist. He had 317 hits before rock and roll made his brand of crooning unfashionable2. Of these, 38 made the number one spot in the USA.

Radio was an important contributor to Bing's success. From 1931 to 1962 he made roughly 4,000 broadcasts, most of them with his own show. Bing was also instrumental in the change from live radio broadcasts to taped shows, hosting the world's first recorded network show in 1946.

During the Second World War, Bing toured the USA and Europe, raising an estimated $14million through the sale of war bonds. A poll in Yank magazine declared him the person who had done most to improve the morale of US troops.

His radio appearances led to his signing a contract with Paramount Pictures for the 1932 film The Big Broadcast. Throughout the 1930s and 40s, Bing starred in many films. Some were high-quality productions with songs that became standards, such as the 1937 film Waikiki Wedding, which won an Oscar for the Harry Owens song 'Sweet Leilani' and was also nominated for Best Dance Direction. Other films, however, were just a poor excuse to get Bing on screen and singing.

In 1940, Bing was teamed up with Bob Hope and Dorothy Lamour to make a film called Road to Singapore, which was a box-office success and the start of a hugely popular six-film series.

In 1942, Bing was paired up with another cinematic legend - Fred Astaire - in Holiday Inn. The film gave Bing one of the biggest-selling songs of all time: 'White Christmas'. At the time of writing, 'White Christmas' holds the world records for most non-consecutive weeks on the US singles chart and biggest-selling Christmas song. The success of the song led to a film called White Christmas, in which Bing starred with Danny Kaye.

Bing's greatest success as an actor came in the 1944 comedy Going My Way, in which he played Father Chuck O'Malley, a young priest who has to win over the small community into which he has moved. The film was nominated for ten Oscars, winning seven, including Best Actor for Bing and Best Original Song for Van Heusen and Burke's 'Swinging on a Star.' A year later, Bing also starred in a sequel, The Bells of St Mary's3, for which Bing was nominated for another Best Actor Oscar. Between 1934 and 1954, Bing was one of the top ten box-office attractions, with five years (1944 - 1948) spent at the top.

Up to that point, Bing had generally stuck to playing a similar type of role in films - that of the friendly, easy-going guy with a habit of breaking into song. In 1954, he took on a new challenge, playing an alcoholic singer in The Country Girl. Considered by many to be Bing's finest acting performance, it got him another Oscar nomination, though he lost out to Marlon Brando as Terry Malloy in On the Waterfront.

After that, Bing's film career gradually dwindled. With the exception of High Society (1956), in which Bing starred with Frank Sinatra, Grace Kelly and Louis Armstrong, his films were standard musical numbers with little to distinguish them. His final appearance in character was in a 1966 remake of the John Wayne classic, Stagecoach, although he later appeared as one of several hosts in the 1974 compilation picture That's Entertainment!.

Bing on the Box

Alongside his radio and film careers, Bing was also a familiar face on television in the 1960s. He hosted the variety show Hollywood Palace from 1964 - 1970, and even had his own sitcom: The Bing Crosby Show.

Although he declined to appear in any regular, long-running series, Bing was always happy to appear as a guest on friends' television shows, including those of Bob Hope and Jack Benny. Bing also presented his own Christmas show every year from 1961 until 1977. The final Christmas special, recorded just weeks before Bing's death, led to another Christmas hit song. His duet of 'Little Drummer Boy' with David Bowie was released posthumously as a single in 1982.

Bing's most important contribution to television was behind the scenes. Through his company, Bing Crosby Productions, he financed research into the development of videotape and revolutionised the industry.

Sport played an important part in Bing's life. Like his friend Bob Hope he was an avid golf player, and also listed fishing, hunting and horseracing among his hobbies. He established the first pro-am golf tournament - the Crosby Clambake - at the Rancho Santa Fe course in San Diego. Bing hosted the competition from 1937 until his death in 1977, with a four-year break for the Second World War. Bing was also involved in the building of the Del Mar horseracing track in San Diego, although he sold his stake when he bought the Pittsburgh Pirates baseball team in 1947.

Bing married his first wife, Dixie Lee, in 1930. They had four children and were married until Dixie's death in 1952. In 1955, Bing married Kathryn Grant, with whom he had a further three children. He and Kathryn remained together until Bing's death in 1977.

After his death, Bing's son Gary wrote a book - Going My Own Way - describing Bing as a cruel, heartless and physically abusive father. The accusations in the book were quickly and vehemently denied by Bing's widow Kathryn and his other children. There is little doubt that Bing was not the greatest father in the world, particularly with the children of his first marriage. As with many of his generation, he was a firm believer in corporal punishment for children, though it seems unlikely that he ever carried out the 'beatings' described in Going My Own Way. Bing was also less than generous to his oldest children after his death, leaving his money in a trust fund to be claimed when they were 65. Sadly, the four children of his first marriage all died relatively early, with two committing suicide.

That was a great game of golf, fellas
- Reportedly Bing's last words

Bing died, perhaps appropriately, indulging in his favourite hobby - golf. On 14 October, 1977, during a golfing holiday to Madrid, Bing had just completed a round at the La Moraleja Golf Course when he had a heart attack. Sadly, he never recovered, and the world lost one of its favourite and most successful singers. Fortunately, Bing's foresight in promoting the development of videotape means that his performances will be available for succeeding generations to acquaint themselves with a man who, although not universally liked, was undoubtedly a wonderfully talented musician and actor.

1Creator of the 'Keystone Cops' series of slapstick films.2By way of comparison, Frank Sinatra had 209, Elvis Presley 149 and the Beatles 68.3The films also led to a short-lived television series, with Gene Kelly playing Father O'Malley.