Dorothy Lamour - Singer and Actress Content from the guide to life, the universe and everything

She was a lady of quality, beauty and class
- Bob Hope 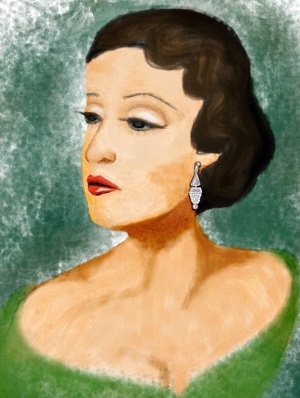 Often under-appreciated during her lifetime, and all but forgotten in the 21st Century, 'Dottie' Lamour was one of the most glamorous and popular film stars of the 1930s and 1940s.

Dorothy was born Mary Leta Dorothy Slaton1 on 10 December, 1914 in New Orleans, Louisiana, the daughter of a waiter and waitress who divorced soon after. She and her mother lived on her mother's meagre income until, at age 15, she forged her mother's signature and dropped out of high school to earn a living. Her first break into the world of showbusiness came in 1931 when she won the Miss New Orleans beauty contest. Dorothy dreamed of becoming a singer, but when her mother moved to Chicago, Dorothy went too and took a job as an elevator operator, earning $17 per week.

While working in Chicago, and performing in vaudeville revues, a friend persuaded her to audition for a job as a singer with bandleader Herbie Kay, who had a national radio show. Dorothy got the job as Kay's female vocalist, and soon after became his wife, although the marriage lasted only four years. Dorothy and Kay moved to New York, where Dorothy began her singing career in earnest. While performing in nightclubs, she met the head of MGM studios, Louis B Meyer, who arranged a screen-test. It was with Paramount, however, that Dorothy finally signed a film contract, making her debut in 1936's College Holiday2.

I felt like a wonderful sandwich, a slice of white bread between two slices of ham
- Dorothy, on working with Bob Hope and Bing Crosby

Dorothy's big break came with 1936's Jungle Princess, in which she played the princess of the title. Dressed in the wrap-around sarong that came to define her career, she was a great success as the beautiful, tiger-owning Princess Ulah.

Her success in Jungle Princess led to her being offered a number of similar parts in films such as The Hurricane (1937), Typhoon (1940) and Beyond the Blue Horizon (1942).

In 1940, Dorothy, still in the sarong, appeared with Bob Hope and Bing Crosby in Road to Singapore. This was the first in a series of six films in which Lamour, Hope and Crosby joked, sang, danced and romanced in a variety of exotic locations.

In 1946, Dorothy arranged a publicity stunt with Paramount, in which she burnt her sarong. Although she played far more roles in modern dress than in the sarong, including Johnny Apollo (1940), Chad Hanna (1940) and The Greatest Show on Earth (1952), she never quite managed to escape her image as 'the girl in the sarong'.

As well as being the pin-up girl for thousands of GIs, Dorothy became known as the 'Bond Bombshell' for her work selling war bonds. She was the first celebrity to offer her services selling bonds, and is also credited with suggesting that people could buy bonds automatically with money deducted from their salaries. Throughout the war she sold around $300 million worth of bonds, more than anyone else. This made her so valuable to the war effort that the US government provided her with a private railroad carriage for her bond tours.

It was during one of her bond tours that Dorothy met her second husband, William Ross Howard III. They were married in 1943 and stayed together until Howard's death in 1978.

When she wasn't on tour, Dorothy spent time at the 'Hollywood Canteen', a nightclub for servicemen. There she would sit and talk with the GIs, and dance with a lucky few.

The moon of Manakoora soon will rise again
Above the island shore
Then I'll behold it in your dusky eyes
And you'll be in my arms once more
- 'The Moon of Manakoora' (Loesser, Newman)

After the war, Dorothy's film career began to dry up, and in 1949 she retired to live in Baltimore with her husband and new baby. The 'retirement' lasted two years, when Dorothy began to tour with her own nightclub act. She also starred in several national touring productions, including Hello, Dolly. Between 1952 and 1987, Dorothy made only six films, including the last 'Road...' film - Road to Bali (1952) and the John Wayne comedy Donovan's Reef (1963).

Throughout her career, Dorothy made occasional television appearances, notably with Bob Hope on his television specials, but also in series such as The Love Boat, 'Murder, She Wrote', Remmington Steele and Hart to Hart. She also appeared with Hope and Crosby in the 'comeback' 'Road...' film Road to Hong Kong, although she was replaced by Joan Collins in the main female role. Instead, she appeared in a cameo as herself, but not before insisting that her part was enlarged, a request to which the producers had no choice but to agree.

Dorothy continued to tour with her cabaret act into the 1980s, singing songs from her films, such as her signature tune 'The Moon of Manakoora' - taken from the film The Hurricane - which typified the relaxed, romantic songs that suited Dorothy's voice perfectly. She also published her autobiography, My Side of the Road. Dorothy's final film appearance was in Creepshow 2 (1987), playing a murdered housewife; a far cry from the days of the sarong.

Dorothy was a rather modest individual who hated fanfare, once replying to an interviewer's question about whether she had been trained in acting or singing with, 'no, can't you tell?'. She answered fan letters personally, using the typing skills she learnt after attending secretarial college later in life.

Dorothy died on 22 September, 1996 at the age of 81. She is survived by her two sons from her second marriage, films that have brought pleasure to many, and memories of a warm and beautiful voice.

1The name 'Lamour', wrongly claimed by some to be from the French l'amour, is in fact based on her stepfather's surname: Lambour.2Although she had appeared three years previously as an uncredited member of a chorus line in Footlight Parade.