Bob Hope - a Short Guide to a Long Life Content from the guide to life, the universe and everything 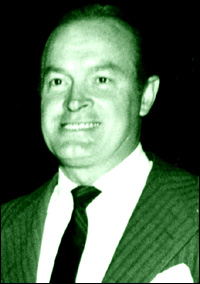 I left England at the age of four when I found out I couldn't be king.

Leslie Townes Hope was born in Eltham, south-east London on 29 May, 1903, the son of a stonemason and a singer. Four years later, his family emigrated to the United States, settling in Cleveland, Ohio. It is unclear exactly when he decided on the name 'Bob'. One story states that it was in response to teasing from his classmates, who shortened his roll-call name - Hope, Leslie - to 'hopeless'. Bob himself is on record as saying he chose the name because it 'sounded brisker'.

Growing up in Cleveland, the young Bob took a variety of menial jobs including delivering newspapers, selling shoes and delivering meat. He also spent a short time as a boxer, fighting under the name 'Packy East'. In his spare time, he entered many talent contests, eventually earning a meagre living as a dancer in vaudeville with his then girlfriend Mildred Rosenquist. This 'career' lasted until Mildred's mother found out.

Bob next teamed up with his friend Lloyd Durbin for shows in local theatres until they were booked to appear as part of the Fatty Arbuckle1 show.

After a year of playing Cleveland with Durbin, he again changed partners and began touring with George Byrne, eventually making it to New York. They appeared very briefly on Broadway before taking their agent's advice to rethink their act. Booked to perform at a small theatre in Pennsylvania, Bob was asked to deliver a series of announcements about forthcoming attractions. His delivery of potentially dull material, which he eventually extended to a five-minute stand-up slot, entertained the audience and impressed the management. He decided to split from his partner and go solo.

Bob's big break was his appearance in the Broadway musical Roberta (1933), in which he played a wise-cracking character called Huckleberry Haines. During the show's run, he was also introduced to Dolores Reade, a singer performing in a club on 57th Street. The couple married the following year and remained together until his death.

After the success of Roberta, he went on to appear in the Broadway shows Say When (1934), Ziegfeld Follies (1936) and Red, Hot and Blue (1936). It was during the latter show, in which he co-starred with Ethel Merman and Jimmy Durante, that he was spotted by Paramount Pictures and found himself in feature films.

The Road to Hollywood

Bob's first film appearance was in the short film Going Spanish (1934). This was followed by a handful of musical or comedy shorts until he was cast as Buzz Fielding in The Big Broadcast of 1938, performing the Oscar-winning song 'Thanks for the Memory'.

The films that made Bob Hope into a Hollywood star were the Road... movies of the 1940s and 1950s. Bob starred with Bing Crosby and Dorothy Lamour in six films2:

The films all featured a similar plot, with Bob and Bing playing two 'down on their luck' characters who inevitably end up escaping from crooks or creditors and vying for the love of Dorothy Lamour in the exotic location of the title.

Although he never won an Oscar, Bob received five honorary awards from the Academy of Motion Picture Arts and Sciences between 1941 and 1966, including the Jean Hersholt Humanitarian Award in 1960. He also sang two Oscar-winning songs: 'Thanks for the Memory', as noted above, and 'Buttons and Bows' which appeared in The Paleface (1948).

His career in films spanned six decades, ending with a cameo role as himself in Spies Like Us (1985). The film was a homage to the Road... movies, with Dan Ackroyd and Chevy Chase taking on the Crosby and Hope roles.

Bob's radio career ran in tandem with his film career; many of his film co-stars doubled as guests on his radio shows. His earliest radio performances were promotional slots for the theatrical shows in which he was involved. In 1937, he was given a regular slot on NBC's The Woodbury Soap Show3. A year later, he was given his own show, which was broadcast on Tuesday nights until 1956.

Television also provided a vehicle for Bob's brand of comedy. He first appeared on television in the 1930s, while this new technology was still fairly experimental. His first major television appearance was not until 1950, when he hosted the Star-Spangled Revue. Although throughout his career he refused to be given his own weekly show, he was a consistent ratings winner whenever he appeared on television as a guest or a host.

Although his theatre, film, television and radio performances made him famous, it was his work with the United Service Organizations (USO) entertaining US troops that earned Bob the most respect and affection as their 'Ambassador of Goodwill'.

His relationship with the USO began during the Second World War, when he performed for airmen stationed in California. From 1941 to 1945, almost all of his radio shows were broadcast from military bases in the US, Europe and the South Pacific.

In 1948, Bob made a Christmas broadcast while entertaining troops involved in the Berlin airlift. This rapidly became a tradition and all of his subsequent Christmas broadcasts - over a period of 34 years - were made from military bases.

His last USO tour took place in 1990, when he visited Saudi Arabia during 'Operation Desert Shield'4. In October 1997, his work with the troops was formally recognised when he was made an honorary veteran. The award was created specifically for him in a special resolution by the US Congress and he referred to it as 'the greatest honour I have ever received'.

Golf is my profession. I tell jokes to pay my green fees.

The true passion of Bob's life was golf. He played with six US presidents - Dwight D Eisenhower, Richard Nixon, Gerald Ford, Ronald Reagan, George Bush Sr and Bill Clinton - and wrote a best-selling book of his golfing memoirs: Confessions of a Hooker.

He also helped to found the 'Bob Hope Chrysler Classic', an annual pro-am golf tournament which takes place in Palm Springs, California. Since its inception in 1960, the tournament has raised over $35 million for local charities.

Bob is listed in the Guinness Book of Records as the world's most honoured entertainer, with more than 2,000 awards for his work and his role in entertaining troops. In addition to the awards from the Academy of Motion Picture Arts and Sciences noted above, his awards include:

As if those weren't enough, he was also awarded nearly 60 honorary doctorates from colleges and universities across the US and a 'degree in comedy' from the University of California at Los Angeles7.

It is impossible to see how he can do so much, can cover so much ground, can work so hard and be so effective. There's a man. There really is a man.
- John Steinbeck

Bob continued performing well into his 90s, almost up to the time of his death, aged 100, on 27 July, 2003. Shortly before he died, he donated an enormous number of his old scripts and material to the 'Bob Hope Gallery of Entertainment', held at the US Library of Congress.

Bob's appeal was universal, from those who grew up with him and knew him from his radio shows, to those who are still discovering his films today and finally to the US military personnel who considered him their own private entertainer. His legacy from nearly a century of entertainment will not be easily forgotten.

1A star of silent films whose career was ended by unproven allegations of rape.2A seventh film - The Road to Hong Kong - was made in 1962 and featured Joan Collins as the love interest, with a brief cameo from Dorothy Lamour as herself.3Many early radio shows were sponsored by soap manufacturers - hence the term 'soap opera'.4A military campaign, led by the US, following Iraq's invasion of neighbouring Kuwait.5Awarded to Bob by US President John F Kennedy.6Despite being born in the UK, Bob was a US citizen, so this was technically an honorary award.7Such are the breadth and depth of Bob's achievements that, in some places, his name has become a slang term meaning 'no hope', as in 'I've got Bob Hope of achieving that before I'm 30'.