An Introduction to The Beatles Content from the guide to life, the universe and everything 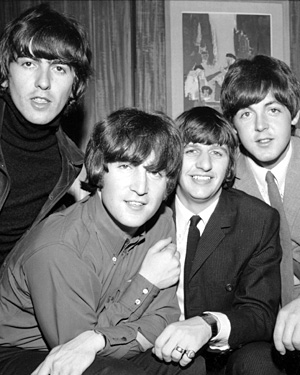 The Beatles are probably the best-known group in pop music history. You will find many people who will do absolutely anything to get their hands on a vinyl copy of a Beatles album, a peculiar idea, as many of these people were around during the 1960s, and could have bought the record at the time, for a fraction of the price.

You will also find a portion of the population who will do almost anything to avoid The Beatles. Some of these people come from the pre-Beatles generation, who still detest the same music that they detested so many years ago. Others come from the younger generation who think of it as 'elevator music'.

The band was originally called The Quarrymen. It was formed in Liverpool, England, around 1960, after Paul McCartney saw John Lennon performing at a church picnic. Paul was impressed by John's ability to sing loudly, and to improvise when he couldn't remember the words to a popular song. Meanwhile, John was impressed because Paul actually knew the lyrics. A few years later, they were to sign to EMI as The Beatles.

Paul McCartney - as one half of the famous Lennon/McCartney song writing duo, Paul was the band's bass player, though he occasionally played piano and other instruments. His gift for melody and counter-melody can be seen in songs such as 'Let it Be', 'Hey Jude', and 'Yesterday', the most covered1 pop song in history.

John Lennon - was, for a while, the unofficial leader of the band. John played rhythm guitar and sang lead on most of the earlier tunes. He also added keyboards to songs, and would later share the lead singing spot fairly equally with McCartney. John's hard edge complemented Paul's smooth style in early years, and provided a nice contrast later on, when they weren't working together as often as before. Lennon's mind brought us 'Strawberry Fields', 'I Am the Walrus', and 'A Day in the Life', to name just a few.

Ringo Starr - was born Richard Starkey, Ringo was the drummer. He wasn't known for his singing ability, and the songs he did sing are almost invariably 'feel-good' tunes. The lead singer on 'Yellow Submarine' and 'With a Little Help from My Friends', both written by the unstoppable Lennon/McCartney team, Ringo also sang and actually wrote songs such as 'Octopus's Garden' and 'Don't Pass me By'.

The band did what earlier English pop groups had only dreamed of: they made it big in America. Releasing four albums in the span of about a year, Beatles music was soon blasting out of the record players and radios of the world's youth. The band appeared on The Ed Sullivan Show2, and performed in stadiums in front of thousands of screaming teenage fans, many of whom could not hear the music above their own caterwauling. This ultimately led to the band's decision to withdraw from touring, to become a full-time studio band.

It was from out of their 'studio only' decision, that one of the most ground-breaking rock albums of all time was released: Sgt Pepper's Lonely Hearts Club Band. Often considered to be one of the greatest ever concept albums, Sgt Pepper brought us songs like 'Lucy in the Sky with Diamonds', 'A Day in the Life', 'A Little Help from my Friends', and, of course, the title track.

The Beatles split up in 1970 due to creative differences, and possibly because of John's marriage to Yoko Ono. They had been recording for less than a decade. Paul and John went on to have the most successful solo careers of the four. George had a few minor hits, and a brief career with the Traveling Wilburys. He produced a number of popular and lucrative movies, including Monty Python's Life of Brian, Withnail and I, and Time Bandits. Ringo tours with his All Star Band, but has not had a major hit in years. He often appears on TV, particularly on children's programmes.

John was assassinated in 1980, in New York, breaking the hearts of his family, friends, and former band mates.

In 1995, Paul, George and Ringo added their own contributions to a demo of two unreleased John Lennon songs to accompany the release of The Beatles Anthology, a collection of CDs and video cassettes with out-takes, alternate takes, interviews and a good deal of background information on the band (the Anthology was released on DVD in 2003).

George Harrison died in November 2001 after a long battle with cancer. Only two years earlier he had had a brush with death when an intruder broke into his house and stabbed him.

It would be a very long Entry indeed that contained a full discography of The Beatles; longer still, if their collective solo hits were also included. Suffice to say, The Beatles influenced most modern performers, either directly or indirectly. Your favourite artist probably either loves The Beatles, or was greatly influenced by someone else who did.

1Variations of the song are performed by other musical groups2A popular American TV variety programme.