SPAM - the Food Content from the guide to life, the universe and everything 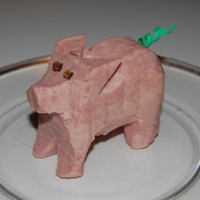 SPAM1 was invented in 1937 by George A Hormel's Hormel Foods, and was going to be called Hormel Spiced Ham (which is, more or less, what it is) - but thankfully the world was saved from such banality by the offer of a Handsome Cash Prize ($100) for the invention of a better name, and SPAM was born. Kenneth Daigneau, brother of a Hormel executive, scooped the pot. Since then it has been produced almost unchanged, apart from one update to the packaging in 1997, for over six decades and six billion cans.

Although over 20,000 tons of SPAM had been sold by 1940, it was the War which was responsible for it travelling the globe, carried by American aid packages and the US Army. In common with its military cousin Bully Beef (or corned beef), with which it shares the crucial advantage of requiring no refrigeration in storage, it was fated to masquerade under a thousand disguises, a practice which continues today often in defiance of all common sense. If we tried to tell you some of the things you can allegedly make with SPAM you wouldn't believe us, so visit their site and find the authentic recipe for SPAM cupcakes. All this hides a serious point: Nikita Krushchev credits SPAM with saving the Soviet army during World War II, and the ready availability of a high-protein product was certainly a crucial part of military catering at that time (and since). Modern compo rations owe a debt to the humble can of SPAM.

This curious American comestible is an institution in the USA and achieved a high profile in post-war Britain as it was one of the few readily available meat products, hence its inclusion in the famous Monty Python 'SPAM sketch'2. In these days of Starbucks and McDonalds we tend to forget the sheer ubiquity of SPAM in those heady days of Elvis and transport cafés. SPAM brand luncheon meat was a genuine favourite, having a unique and characteristic flavour due to its secret blend of spices and other ingredients. As a tinned product it could be kept for ever, and was often rotated in the stockpile of tinned goods kept in case of nuclear Armageddon. It became - and still is - a comfort food for grown-ups, with nearly 60 million cans a year being sold.

And now, just as Elvis fans make their pilgrimage to Graceland, SPAM devotees (of which there are a quite improbable number) are drawn to Austin, Minnesota, where a 16,500 square-foot SPAM Museum opened in September 2001. Honestly, you couldn't make this up!

The Other Kind of Spam

SPAM is a trademark of Hormel Foods, a company which is justly proud of its product. They politely ask that you refer to unwanted email using the uncapitalised 'spam' rather than their trademark, which is fair enough. The use of the word spam first to describe multiple cross-posting on Usenet, then to unwanted bulk email email comes of course founded from the Python sketch - for more details see the entry on spam3.

And Back to the Real SPAM

SPAM fritters are a particularly tasty way of avoiding starvation at Scout camps, and can, like baked beans, be consumed raw in a pinch (and with less potentially disastrous results on the atmosphere in your tent). US-based Researchers who have never tried SPAM can sample a range of, er, delicious SPAM-based foods by visiting the SPAMMOBILE as it tours the USA. Sadly the more discerning tastes of 21st Century civilisation are undermining this fine product, and it is no longer made in the UK (although it is still available in over 99% of US supermarkets). Hawaiians are the world's most avid consumers of SPAM, averaging over four cans per year each.

The ingredients, according to the tin, are: Chopped pork shoulder meat with ham meat added4, salt, water , sugar, sodium nitrite, and, of course, those secret flavourings.

Interesting historical footnote: whatever we may think of the additive-rich, detail-poor ingredients list on a tin of SPAM, the generation which endured rationing in the UK (and ate SPAM in enormous quantities) is, by and large, the healthiest and longest lived in the nation's history.

1Makers Hormel Foods usually capitalise it, to match the spelling on the tin.2in which one character chooses 'Spam, spam, spam, spam, spam, spam, baked beans, spam, spam and spam'. When told that 'baked beans are off', he asks if he can have spam instead. His wife, by contrast, orders 'Egg, bacon, spam and sausage without the spam' (she doesn't like spam). The response is, predictably, 'Egg, bacon, spam and sausage without the spam? Eeuuuuurgh!' and a group of Vikings (obviously, what else would you expect in a greasy spoon?) started singing the now legendary Spam song: 'Lovely Spam, wonderful Spam'.3If you get unwanted email, you could subscribe to SpamCop.4That is to say, miscellaneous bits of left-over dead pig - finest Melton Mowbray Pork Pies are made of much the same stuff.