The 1960s - Television Content from the guide to life, the universe and everything 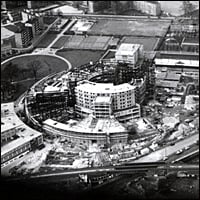 I love the comedy of the 1960s. Though the main product of the Peter Cook-led satire boom was the now faintly embarrassing That Was the Week that Was, we did have the gorgeous Not Only But Also - if only more of it was left.

By the dawn of the 1960s, television in the UK was no longer merely a gimmick or a novelty. Following the broadcast of Queen Elizabeth II's Coronation in 1953, the number of television sets had grown spectacularly in homes up and down the country. Regular programmes were being scheduled on both ITV and on the BBC, and several programmes had caught the imagination of viewers like little else before (for instance, Nigel Kneale's Quatermass science fiction thrillers, shown from 1953 to 1959).

Despite its burgeoning popularity, the technology required to broadcast signals and receive them in homes was decidedly primitive. Family evenings spent huddled around a tiny black and white set could be easily spoiled if the wind dislodged the aerial by even a fraction. Owing to the exorbitant cost, most TV sets were rented rather than purchased - so a familiar visitor to many households was often the TV repair man, somebody whose knowledge of valves and horizontal hold knobs was nigh on miraculous.

At the start of the decade, the commercial channel ITV had a stranglehold over the ratings in the UK. Not restricted by the higher 'Reithian'1 ideals of the BBC, ITV's stated aim was to provide programmes with mass market (often lowest-common denominator) appeal. Much of its schedules comprised a tasty melange of imported American action series and Westerns with big-money game shows and quizzes. However, in December 1960, ITV showed the first episode of a drama series that would go down in history as Britain's best-loved programme of all time: Coronation Street. At roughly the same time, ITV increased the amount of drama and plays it was carrying, generating huge audiences for what now appear to be quite high-brow adaptations of complex stage plays. The man responsible for a lot of this shift in thinking (and for commissioning such legendary programmes as The Avengers) was a Canadian called Sydney Newman. Seeing how successful he had been at ITV, the BBC decided to poach him and offered him a job as head of Series and Serials for the BBC.

Over the course of the next few years, the BBC began a fight-back against the mighty power of the commercial network with a range of programmes that would become legendary: Z Cars, Till Death Us Do Part, The Likely Lads, and Doctor Who, amongst many others. Other shows would be remembered for entirely different reasons - the justifiably-maligned yet unfathomably popular Black and White Minstrel Show, for example.

The most famous satirical programmes aired during the 1960s was That Was The Week That Was (TW3 for short), hosted by up-and-coming performer David Frost. Beginning in 1962, the young and ruthlessly funny TW3 team heaped scorn on world events and the government - using the BBC to do it. There were many complaints about shows of this type. Mary Whitehouse of the National Viewers and Listeners Association described TW3 as 'Anti-authority, anti-religious, anti-patriotism, pro-dirt.' These however were the things that many people liked about the programme. David Frost also successfully exported the format to the USA.

The show eventually came off the air when the BBC chiefs grew concerned about how TW3 would handle the 1964 election. The show was briefly taken off the air, never to return. On its final edition, David Frost closed the show by saying: 'That was That Was the Week That Was, that was.'

During the 1960s, the technology supporting the broadcast of television improved drastically. On 1st January 1960, the only television available in the UK was in black and white, and was broadcast on two channels only - BBC Television, and the ITV Network of affiliated commercial stations such as ATV, Associated-Rediffusion and Granada. TV sets themselves were tiny, with an average picture size of approximately 12 to 14 inches across the diagonal of the screen (as opposed to standard 32 inch sets seen today). Audio was limited to a hissy mono signal, and widescreen images were very much a thing of the future, with all transmissions being made in a 4:3 ratio rather than today's 14:9 or 16:9 standard. There were few foreign correspondents reporting on the news from abroad, and the very idea of being able to record and watch a programme again on a domestic VCR was a distant fantasy. Programmes were shown once and once only - if a programme was especially popular, a few selected episodes might be repeated. And daytime programming? Forget it. Aside from a few limited children's and schools' programmes during the day, the two networks only broadcast from teatime until late evening. In short, the way in which television was broadcast in the 1960s was radically different from the way it is today.

The world became a much smaller place on 11 July, 1962 when the first artificial communications satellite, Telstar, beamed a picture across the Atlantic. Created by the American telecommunications giant AT&T2, Telstar was able to carry both television and telephone signals instantaneously across the Atlantic. Telstar was such a massive leap forward, and made so many international headlines, that an instrumental pop song called Telstar was released by The Tornadoes3. From now on, instant feedback was possible between countries thousands of miles apart. Just a year after the very first test transmissions, the Telstar and Telstar II satellites were used to flash information about the assassination of President John F Kennedy across the Atlantic - and then to feed back the reactions in Europe to the USA.

In July 1962, the UK Government published a White Paper based upon the findings of the Pilkington Report into the current state of British Television. The Report proposed that the ITV Network should be restructured, and that a third channel should be brought into existence. In exchange for a significant rise in the Licence Fee, it was decided that the BBC should be responsible for this third channel - a channel aimed at providing distinctive and perhaps slightly more high-brow programming than was being provided by ITV and the BBC. The station was to be called BBC2, and it was to make its first appearance on 20 April, 1964.

BBC2's opening night of programmes received much more publicity than might have been hoped for, when, without warning, just one hour prior to the new channel's first transmission, a massive power cut blacked out huge parts of West London - including the BBC Television Centre. So instead of settling down to watch a performance of Cole Porter's musical Kiss Me Kate, viewers were left with the embarrassing sight of newsreader Gerald Priestland broadcasting an apology about the power cut from the BBC's North London studios at Alexandra Palace. As a result of the last-minute cancellation, the first 'proper' programme to be shown on BBC2 was the following morning's episode of Play School4. Until February 2003, it was assumed that all footage of the BBC2 Launch Night had naturally been lost, owing to the power failure in Television Centre, it would have been impossible for any recordings of the proceedings to have been made. However a chance discovery in the BBC's Research and Development Centre in Kingswood Warren revealed a gem of television history - an off-air recording of the disastrous launch night, in pristine condition on 625-line videotape. As such, it remains one of the oldest surviving pieces of BBC material to survive on 625-line video.

One of the key advantages that the newly-launched BBC2 brought to both programme makers and audiences was the vastly improved technology behind its broadcasts. The existing BBC1 service was still broadcasting in the older, less-advanced system of 405 horizontal lines to make up a single picture. BBC2 launched with a new, improved 625-line system that provided much sharper and clearer pictures. In order to receive these pictures, however, viewers needed to have a new aerial installed in their homes, and - more importantly - obtain a new TV set to enjoy the benefits of the improved signals.

Although an improved picture quality was a definite bonus, the primary reason for introducing 625-line television was to enable the first colour TV broadcasts in Europe - something that would not technically be possible on the old 405-line system. A limited service of certain colour programmes began on 1st July 19675. The very first programme ever shown in colour on British television was an Outside Broadcast of the Wimbledon Tennis Championships6 - other colour programmes shown on BBC2 in the first week included an episode of the Western series, a one-off play, a documentary and the daily arts programme Late Night Line-Up. By December 1967, BBC2 was broadcasting a 'full' colour service, with approximately 80% of its output now being made in colour. Both BBC1 and ITV followed suit with their own colour transmissions from 15 November, 1969. By the end of the 1960s, there were only approximately 200,000 colour TV sets in the whole of the UK. Despite this, most programmes were being made in colour, and by 1976 most homes had abandoned their dated black and white sets for the glories of full-colour telly.

1The BBC core values - Educate, Inform and Entertain - as set out by former chairman Lord Reith.2The American Telephone and Telegraph Company3It topped the charts in the UK and became the first ever song by a UK group to get to No1 in the USA. 4As a side note, the originally-planned schedule for launch night was held back until the following Sunday, at which point it was introduced with the famous clip of presenter Dennis Tuohy blowing out a candle.5But only in certain parts of the country at first: initial colour broadcasts came from transmitters in Crystal Palace, the Midlands, Southampton, Lancashire, Yorkshire and Lincolnshire, with other colour transmitters gradually coming on line as the years passed.6Although tragically this colour footage did not survive the archive purge of the 1970s. The Men's Singles Final, recorded a few days later, does happily survive intact.