Dawn French - Comedienne and Actress Content from the guide to life, the universe and everything 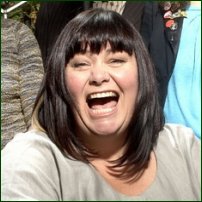 Dawn French is a celebrated comedienne who is well-known for acting alongside fellow comedienne Jennifer Saunders.

It was my father who taught me to value myself. He told me that I was uncommonly beautiful and that I was the most precious thing in his life.
- Dawn French

Born 11 October, 1957, in Holyhead, Wales, Dawn Roma French attended St Dunstan's Abbey, a boarding school in Plymouth, from the age of 11, while her father was stationed at RAF Valley. French was very unhappy at school and didn't fit in alongside the upper-class children. However, this didn't stop her from doing well at school and obtaining a debating scholarship to study at Spence School in New York, where she met David White, an Irish sailor, and became his fiancée. The relationship wasn't to last though, as he met another woman while out in Sri Lanka and called the engagement to Dawn off. In 1977 her father committed suicide after leaving the RAF; he was only 45.

French then returned home to the UK to follow in her favourite schoolteacher's footsteps, that of drama teacher Ms Abbott. She trained at London's Central School of Speech and Drama and met fellow comedienne Jennifer Saunders. At first French and Saunders used to avoid each other like the plague but as time ticked by they came to realise they had several things in common and stuck by one another, even sharing a house in their final year of school1.

I enjoyed teaching very much. I taught from 11 up to 18. I taught Drama and English. However, I have absolutely no training as an actress - as is blatantly obvious.
- Dawn French

After graduating from London's Central School of Speech and Drama, French began a career in teaching, but this was short-lived as her friend Saunders found an advert for comedians to appear in Comedy Store.

We were just the first creatures with boobs to walk through the door.
- Dawn French

French finished her teaching year by teaching during the day and doing stand up comedy alongside Saunders at night at the Comedy Store. There she met other comedians such as Rik Mayall, Adrian Edmondson, Nigel Planer and Peter Richardson. Together they went on to form their own club The Comic Strip, which unlike the Comedy Store, was free from hecklers. Some of the comedians whom they met went on to appear in The Young Ones and French and Saunders were asked to put in a few appearances. In 1982 one of the comedians Peter Richardson approached Channel Four's Jeremy Isaacs and the result was that many of those who came together in The Comic Strip club now appeared on television under a similar name to their club The Comic Strip Presents....

During her time in The Comic Strip, Dawn French met and fell in love with Lenny Henry and when she met his mother she was challenged to show how much she loved him by eating his mother's Jamaican cooking.

If I could get through it, then I was in the family.
- Dawn French

She won the challenge and in 1983 Lenny Henry asked French to marry him and a year later they tied the knot. They have since brought up an adopted child called Billie and try to live life as normally as possible in Berkshire.

Instead of going to the opening of the new Power Rangers Movie, we pay our £3, go to the cinema locally, buy a pizza afterwards and have a nice time together as a family. There's really no contest.
- Dawn French

French has helped raise money for a variety of causes including Amnesty International and Comic Relief. Comic Relief was set up in 1986 by French, her husband Lenny Henry and Richard Curtis (the writer of the Vicar of Dibley, Four Weddings and a Funeral and Love Actually). Starting out as three nightly shows at Shaftesbury Theatre raising money to relieve poverty in the UK and abroad (such as Africa), Comic Relief has gone on to raise millions of pounds every other year with help from the BBC. Cherished moments from the life of the charity include:

In 1987 French and Jennifer Saunders decided to get together and create the BBC comedy sketch show, French and Saunders. Since then they have been on tour as a double act and have created a brand of the same name under which they have embarked on various programmes. However, they do not always appear alongside one another.

As a large lady French understands all too well the plight of the larger woman and the media image. Like other female comedians such as Jo Brand and Victoria Wood, she makes fun of this through her comedy acts. However, she has also gone one step further by creating her own women's clothes range with Helen Teague called Sixteen 47, which aims to dress big women in beautiful clothes. The name Sixteen 47, derives from the statistic that 47% of the British female population are at least a size 16. The company was set up in 1991 and now Evans, Selfridges and Liberty stock the clothes. French has also produced two books with designer Sylvie Soudan to do with knitting called Big Knits and Great Big Knits.

I never do any television without chocolate. That's my motto and I live by it. Quite often I write the scripts and I make sure there are chocolate scenes. Actually I'm a bit of a chocolate tart and will eat anything. It's amazing I'm so slim.
- Dawn French

For Dawn French, comedy and chocolate go hand in hand and in recent years French has been endorsing Terry's Chocolate Oranges by appearing on their advertisements:

It's not Terry's. It's mine.
- Terry's Chocolate Orange slogan

Although the slogan in itself is amusing, it should be remembered that chocolate can cause weight gain. This is often seen as a bad thing especially where the media are concerned with the slim body. However, French affirms she is not unhealthy and being big has helped make her successful.

The Vicar of Dibley

Although I tease Dawn that she was seventh choice for the part, it's pretty clear that she's always been the heart and soul of the show.
- Richard Curtis speaking to the Radio Times

Aside from French and Saunders, French has taken part in numerous shows including Murder Most Horrid (1991 - 1999), where she played a total of 18 characters, sometimes the murderer and at other times the victim; there were even times when she was both. She also played a journalist in Ben Elton's Silly Cow (1991). However, she is more well known for appearing in Richard Curtis's Vicar of Dibley (1994 - 2007), in which she played the main character, the Vicar (Geraldine Granger), which was specifically written for her to play as a 'thank you' for helping with Comic Relief. Memorable moments in the series include:

The most-watched programme of the day was The Vicar of Dibley, where 12.3m viewers watched Geraldine walk down the aisle followed by the tenth Doctor and two Daleks.
- Doctor Who News Page

The Vicar of Dibley was so successful that it picked up an Emmy award and enabled French to pursue roles in films such as The Adventures of Pinocchio (1996), Milk (1999) and Maybe Baby (2000).

In 2001 French and Saunders were offered an OBE for 'services to comedy drama' but they turned it down as they felt they shouldn't be rewarded for doing their day job, when there were far more deserving cases, like charity volunteers and carers. In 2002 they won the honorary Golden Rose of Montreux award.

I am not, I repeat, NOT a lesbian - even though I'd like to be one when I grow up.
- Dawn French on Wild West

French furthered her acting career that year by appearing in Simon Nye's2 production of Wild West (2002 - 2004), which gave her an insight into what it was like to be a lesbian in Cornwall. Her appearance in Ted and Alice was equally unusual as she played a human in love with an alien.

Speaking as a parent, I would say hurray for having two fantastic films to take kids to. They're both great in entirely different ways. We've had some famine years to take children to the movies and I'm delighted that there are two great films around.
- Dawn French

During the winter of 2006, French played Rosie in Jam and Jerusalem and guest appeared as Vicky Pollard's mother in Little Britain.

French is currently preparing for a part in the comedy High Table, which is due for release in 2007, a part in the comic opera The Daughter of the Regiment, a role in next year's follow up from Jam and Jerusalem is going to be Catterfield and, finally, Dawn will provide the voice of Miss Spink in the animation of Neil Gaiman's Coraline in 2008.

Throughout her career as a comedienne and actress French has been a part of several tours and theatrical performances. Below are just a sample of them: