Elvis Impersonators Content from the guide to life, the universe and everything 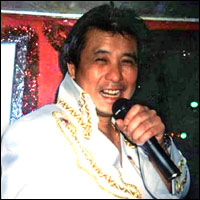 Since Mr Vaughan could not be here, I have decided to come myself.
- US President  John F Kennedy jokes about his impersonator.

Elvis Presley, who was born on 8 January, 1935, passed away on 16 August, 1977, aged 42 years1, after a remarkable life during which he became an icon to millions. His recordings and memorabilia still sell well, decades after his death: 2005 was the fifth consecutive year that Elvis had topped the list of top-earning deceased celebrities2.

The distinctive Las Vegas concert jumpsuits, mannerisms and style of Elvis have been adopted by imitators and spawned a remarkable industry, that of Elvis impersonators. 'Elvisology', (an Americanism), is a thriving business and there are courses on offer to hone the skills of the more zealous.

Most of the people who adored Elvis but who cannot now see their idol in the flesh, will pay a good deal of money to see and hear an Elvis impersonator. Why? Because it's better than nothing. Elvis was a one-off, there has never been anyone to replace him, so even his impersonators, who are mimicking him - not trying to replace him - are celebrated and enjoyed.

Elvis is the most imitated person in history, with an estimated 85,000 impersonators, although professional impersonators prefer to be known as 'Elvis Tribute Artists'. You can book one to serenade you while you propose to your beloved, or arrange a special 'Elvisgram' for a bride-to-be on her hen night.

It is not essential to look like Elvis to be an Elvis impersonator: a black 'Teddy Boy' wig; large sunglasses; chunky jewellery; a white, blue or red studded jumpsuit and cape; and a guitar are all that is necessary. The ability to bend on one knee, throw out your arms and mumble the words:

can send an audience into raptures.

At an Elvis convention you can expect to see black, Chinese and even female Elvis impersonators. Those who can actually sing have a job which lends them a kind of celebrity of their own. If you look the part you can have your own show on Blackpool Pier. Elvis buskers do remarkably well and there are Elvis stiltwalkers who appear in parades.

There is a Blackpool contest planned for January 2007, to find the 'best' Elvis impersonator. Competition is tough, with entrants being seeded to keep out the riff-raff.

In January 2006 you could have booked a 'Memories of 'The King' Caribbean cruise' with nightly performances by talented lookalike/soundalike Elvis Tribute Artists. Was this the last 'Elvis tribute' cruise? Now Elvis impersonators, who have previously used his likeness unbound by legalities, may lose their right to mimic 'The King', because an American entrepreneur, Robert Sillerman, bought control of the Elvis Presley name and likeness for $100m (£51m) in 2005. Sillerman runs the Presley family home Graceland Mansion in Memphis, owns the rights to his photographs, receives royalties from recordings, and revenue from sales of merchandise, CDs and films. It is possible that Elvis impersonators will require a licence now that the image of 'The King' has been sold3.

Up until early 2006 you could be married in the UK and Las Vegas4 with an Elvis impersonator serenading you, and have photographs taken with him (or her). Certainly a wedding with a difference. All good fun and great for the photo album and memories of your big day. There will be crying in the chapel if these popular services are no longer available.

Any Southern boy with a country voice can do Elvis.
- PJ Proby

'Father Ted', 'Homer Simpson' and 'Johnny Bravo' have all impersonated Elvis in their respective television programmes.

Ask Elvis is featured on Steve Wright's programme on Radio 2. Viewers phone the show and an Elvis impersonator answers their questions in the unique Elvis style. If you have ever wanted to know why the sea is salty; why nobody makes brown cars; what an ice-cream head is; how long snails sleep for; if any foods contain rubber; how many spiders do we eat while asleep and similar types of questions, then this is the show for you. 'Elvis' also sings his own take on other artists' songs.

The industry of Elvis impersonators has grown in leaps and bounds since the death of 'The King' himself. There are many books on the market available to teach you how to become an Elvis impersonator and how to promote yourself. The really good lookalikes and soundalikes can earn a great living from impersonating Elvis and indeed become minor celebrities themselves. It's all about perpetuating the spirit of the King of Rock 'n' Roll. Surely it's just a question of time before there's a University dedicated to the study of his contribution to the world?

1Ironically, his mother was the same age when she died.2Followed by Charles Schulz; John Lennon; Andy Warhol; Theodor Geisel; Marlon Brando; Marilyn Monroe; JRR Tolkien; George Harrison and Johnny Cash.3If you try and load US Elvis Impersonators' own websites you will find they are all closed down.4Two h2g2 Researchers were married in Las Vegas in April 2005, with 'Elvis' giving the bride away.5Academy of Science Fiction, Fantasy and Horror films (USA).