Las Vegas, Nevada, USA Content from the guide to life, the universe and everything 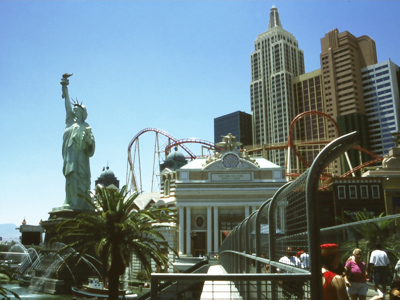 Las Vegas is a city that was built to cater to the baser sensibilities of mankind. This Nevada-based city, USA, is best known as a Mecca for casino gamblers around the world. In addition to catering to the increasing class of people who demand the ultimate gambling experience, the city also offers the services and amenities that one would expect from the world's largest theme park for adults.

The casino scene in Las Vegas has quickly approached the point of absolute ridiculousness. About ten years ago, all casinos in Vegas were essentially glitzy-looking, fairly generic buildings that offered standard-fare games in modest supply. The last ten years has seen an acceleration of super-mega-hotel/casinos, that really must be seen to be believed. Every conceivable theme has been fleshed out - a tropical theme in The Mirage, an ancient Roman theme in Caesar's Palace, a Parisian theme in The Paris, and a South American hot-salsa theme in The Rio - just to name a few. Each of these casino-hotels features not only a staggering number of casino games, but also the surrounding billion-dollar infrastructure meant to convey a feeling of total immersion in the given theme.

For example, looking at the Venetian, which is one of the more popular hotel-casinos. The exterior façade offers intricate reproductions to scale of some famous Venetian landmarks, like the Doge's Palace, St Mark's Square, and the 315-foot tall Campanile Bell Tower. Inside, there is an dazzling array of appointments including a 116,000 square foot casino floor, a 36-storey tower with 3,000 rooms - the smallest being a 800 square foot two-level suite - enough pools to float a small battleship, 500,000 square feet of plaza shopping complete with a canal system and gondolas steered by men in tight horizontally-striped shirts, a 63,000 square foot spa and workout facility, 500,000 square feet of ballroom and meeting space, and half a dozen world-class restaurants. Elsewhere in Vegas there are hotels with more rooms, casinos with more space, and men with tighter shirts.

At some point, the sensory overload makes the endless casinos bleed together into what amounts to an ethereal experience of dizzying proportions. There are certain consistencies between them, however. Each hotel has mercilessly long hallways with SUV1-sized cleaning carts being pushed mainly by women of Latin descent. Each casino always has its 60 year-old women with big glasses who continually pump quarters into slot machines. And many bars are replete with ostentatiously-dressed, silicone-enhanced women whose idea of a good conversation is to discuss the merits of one illegal, psychoactive substance versus another.

In addition to the gaming and general Vegas nonsense, each casino has nightly shows that consist of flamboyant women and even more flamboyant men doing flamboyant things on a stage. There are an endless variety of shows available like singing, magic, water dancing, ice dancing, fire dancing, animal dancing, musicals, or anything else that includes a combination of men with codpieces and women without tops. 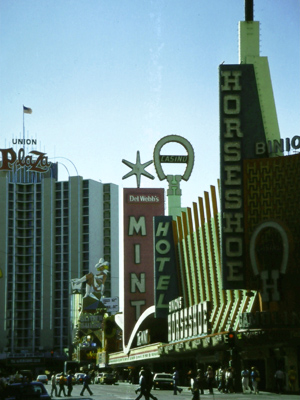 The following catalogue of tips and tricks is not meant to be a thorough tourist guide to Las Vegas, but instead will prove to be a relatively useless list of things you may or may not wish to keep in mind.

Above all, remember that Las Vegas is a fantasy-land. It's simply a holiday destination - but of a different variety. There is more to see and do than can possibly be described in this Guide Entry. Be sure to have fun, budget your gambling and try and stay away from things that would normally get you incarcerated in the US.

Our thanks to Tav's Dad for the photographs.