The Life and Works of JRR Tolkien Content from the guide to life, the universe and everything 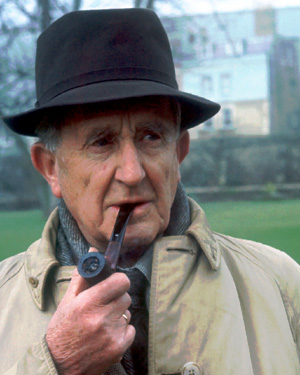 Considered by many to be the first 'fantasy' author, John Ronald Reuel Tolkien, 1892 - 1973 (known to the world as JRR Tolkien and to his friends and family as Ronald) set the current standard for swords and sorcery novels with his immortal Lord of the Rings trilogy. Born in South Africa to English parents, he moved to England in his childhood, where he lived for the rest of his life. After attending King Edward's School in Birmingham, Tolkien studied at Oxford University for eight years. He graduated with a first in English Language and Literature, and married Edith Bratt (his childhood sweetheart) a year later. They had four children, John, Michael, Christopher, and Priscilla.

Tolkien held many jobs throughout his career. He served in the military, fighting in the trenches of WWI. Although he always denied the war's effect on his writing, many of the battle scenes and death experiences in his books were clearly based on reality. After returning from the war with trench fever in 1917, he worked on the Oxford English Dictionary for two years, as an assistant. There, he began to write The Silmarillion, a project which lasted him his entire lifetime. He then took a job as Reader in English Language at Leeds, later rising to Professor of English Language at Leeds. In 1925, the family moved to Oxford where he became Rawlinson and Bosworth Professor of Anglo-Saxon and Fellow at Pembroke College, beginning a tenure of 24 years. It was at this time (approx 1933) that he began telling his children bedtime stories about a funny little creature named Bilbo. This story later evolved to become The Hobbit. In 1945, he became Merton Professor of English Language and Literature at Oxford, a position which he held until he retired in 1959. It was during his tenure at Oxford that he wrote most of his novels.

The Works of JRR Tolkien

The Hobbit and The Lord of the Rings

The Hobbit, a prequel to The Lord of the Rings, (as well as his first published book) was written as a book for children, which the author later said he regretted. He felt that the fairy-tale style in which it was written degraded the overall value of the novel. However, this style opened the world of Middle-earth to many who never would have encountered it otherwise. The rest of the series is aimed at a more adult audience, making them more serious and integrally stronger, though harder to read and not quite as humorous (albeit still quite amusing).

His most famous work, The Lord of the Rings, (an extremely long work written in six books and published in three volumes: The Fellowship of the Ring, The Two Towers, and The Return of The King) takes place in a very vivid world called Middle-earth. This world, although completely invented by Tolkien, contains its own races, cultures, histories, and most impressively its own writing systems and languages. This series introduced to the world many races of his own invention, among which are Hobbits (or halflings), ents, balrogs, and arguably orcs (a race based on the traditional goblin). It also included many new interpretations of traditional mythical races we are now familiar with, such as elves, dwarves, and wizards (although these are traditionally humans). Also featured in The Lord of The Rings is the human, a race which many of us are familiar with.

Plot Summary for The Hobbit and LOTR

The Lord of the Rings presents us with the age-old battle between good and evil. Sauron, the Lord of Mordor, (the bad guy) long ago created a magical ring to make him powerful beyond all belief. However, in days of old it was cut off of his hand by the good guys in a war between the between the hordes of Mordor and two of the free races (elves and humans). The ring, however, which could be best described as having its own intelligence, moved itself from owner to owner through the years, corrupting each owner and making them fanatically obsessed with it. The Lord of the Rings is the story of a group of nine adventurers trying to destroy the ring before it is re-captured by Sauron, or destroys them all with corruption, greed, and hate.

The single defining aspect of most of Tolkien's work, the thing that makes it unique, is how real Middle-earth is. Many races have their own Model Languages, runes and scripts, religions, calendars, family trees, histories, songs, cultures, artefacts, and ancestors. Many of these are only alluded to in the books, but are fully described in the comprehensive appendices at the end of The Return of the King.

Other Works Set in Middle-earth

In addition to the Lord of the Rings and The Hobbit, Tolkien wrote and published The Adventures of Tom Bombadil, a collection of stories starring a character featured in The Fellowship of the Ring. He also left pages upon pages of notes, many of which were later compiled and edited by his youngest son Christopher into three published posthumous works.

The best known of these works, The Silmarillion, provides a fuller account of the mythology and history of Middle-earth. The author loved The Silmarillion, considering it his best piece of work. It is, in fact, excellent, if one is able to contend with the complicated language and not get bogged down. When he died, Tolkien left The Silmarillion virtually complete, leaving his youngest son Christopher to do only mild editing. The Silmarillion and, in fact, all of Middle-earth, was originally intended to try to provide England with mythological creatures and traditions. The author felt that whereas most areas of Northern Europe had a rich history in such fantasies, England had been slighted.

Unfinished Tales, the next most famous of these three, is a collection of historical and cultural stories set in Middle-earth. Unfinished Tales received mixed acclaim; it includes many stories more immediately relevant to The Lord of the Rings, and some felt that it tied together many loose ends that The Silmarillion left. It is, however, what it implies: unfinished. There are those who feel that its 'scrapped together' feel detracts from its overall value.

The third of these works, the epic History of Middle-earth is exactly what it implies: a history of all events not related in the books previously discussed. This work is published in 12 separate volumes:

Works Not Set in Middle-earth

Tolkien wrote many short stories and poems not set in Middle-earth, which can be found in:

He also made many drawings, some as illustrations for his books, others merely to help him visualise places and things, and others still just as works of art. Many of these can be found in the published collection Pictures by JRR Tolkien.

Many of Tolkien's works, especially The Lord of the Rings have remained popular throughout the years. The story has been adapted as a radio series, a full-length animation, and a feature film trilogy. Many authors have written books featuring Middle-earth or its creations, and the actual LOTR has been reprinted countless times by countless publishers, and promises to provide entertaining reading for generations to come.