A Visitor's Guide to Leeds, West Yorkshire, UK Content from the guide to life, the universe and everything 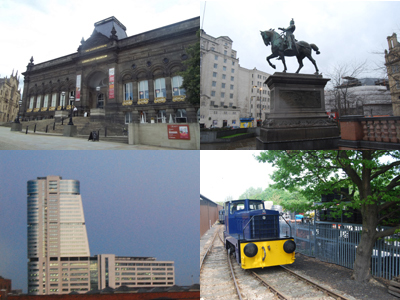 Leeds is the third largest1 city in Britain, with over 715,000 inhabitants2, effectively replacing York as the capital of Yorkshire. Together with the neighbouring and interlinked city of Bradford, Leeds forms a continuous conurbation of over 1.2 million people and is the commercial centre of the north of England.

If you have not been to Leeds city centre before, despite its size, there's no need to worry about getting lost. Leeds is one of the easiest cities in Britain to find your way around in. The central shopping district is on a hill, so north is always uphill and south downhill. Therefore if you're looking uphill, west is on your left and east on your right3. The streets are arranged in a grid plan, so as long as you head in the right direction, you can't go far wrong.

Leeds is situated on the river Aire and is almost exactly half way between London and Edinburgh, and midway between Britain's west coast of Merseyside and the east coast of the Humber. Leeds is easily accessible by car from the M1 motorway from London, the M62 which crosses the country and the Pennines from east to west, the A1(M) from Edinburgh, as well as the Leeds-Liverpool canal which formed the crucial transport link during the city's phenomenal growth during the Industrial Revolution.

The city is a major hub for trains, having one of the largest train stations in Britain outside London, complete with 17 platforms. It is possible to catch trains to most destinations in the UK, and services on the East Coast Line reach London in 2 hours. Leeds also has an international airport on its doorstep, located in Yeadon, which is halfway between the cities of Leeds and Bradford. Unsurprisingly, the airport is called the Leeds/Bradford Airport.

Sadly, it is harder to get around the outskirts of Leeds than it is to get to the city, despite the availability of buses and taxis. Leeds is the largest city in Europe without its own tram or underground network since the last tram was withdrawn from service in 1959. It had been hoped to re-introduce a 17-mile long tram system in the early 21st Century but this sadly was not constructed due to Government funding being cancelled. The land acquired for the tram lines has since been turned into cycle routes, vastly improving cycling around Leeds. Consequently, Leeds now has one of the UK's first Cycle Hubs, known as CyclePoint.

The City Centre's layout is basically square, with the Railway and Bus stations at the southwest and southeast corners respectively. If you arrive in town by train, the main city centre is north and east when you come out of the station, or if you visit by bus then it is west and north.

If you drive in, the City Centre is encircled by a clockwise one-way system called the Loop. There are several car parks located inside the Loop. The easiest way to reach the city centre by car from the South, East or West is off Junction 3 of the M621, easily accessible from the M1 and M62. This takes vehicles to the south of the city centre, passing beneath Leeds Railway Station. Leeds is also accessible from Junctions 1, 2A, 2, 4, 5, 6 and 7 of the M621; junctions 45 and 46 of the M1; and junctions 45 and 44 of the A1(M).

Leeds City Centre has a plethora of shops, many of which are contained inside Leeds' several shopping centres and arcades. The most stunning is the Victoria Quarter arcade, which includes Thornton's Arcade, home of the most famous clock in Leeds. It was built in 1900 and has four life-size quarterjacks, which are characters from Sir Walter Scott's novel Ivanhoe: Richard the Lionheart, Friar Tuck, Robin Hood and Gurth the Swineherd. Others include the Grade I-Listed Kirkgate Market and the Trinity Centre, a vast shopping area that opened in 2013. The main shopping area of Leeds is helpfully pedestrianised. In December, Leeds hosts one of the largest Christmas Markets in Britain.

One of the largest shopping centres in Leeds is the White Rose Centre, located a short distance south of the city centre and easily reached by car or bus.

There are also several pubs, clubs, cafes and restaurants scattered throughout Leeds that reflect its ethnic mix.

Leeds is not a green city. Parks in the city centre itself are limited to Park Square and the small Nelson Mandela Gardens next to Millennium Square. There are, however, some large green areas near to Leeds City Centre, including the grounds of Kirkstall Abbey and Roundhay Park. The waterfront area is also a pleasant destination to sit and relax.

Instead of parks, Leeds has large, open squares. The first of these is City Square, opposite the station, which is decorated with fountains and statues of prominent Leeds figures4, the Black Prince5, and feminine figures representing dusk and dawn. For Leeds' millennium project, Millennium Square was created. This is located in the north of the city centre, between the Civic Centre and Leeds City Museum, and is used as the venue for a wide variety of activities.

There are three main theatres in Leeds. These are:

Appropriately enough for the birthplace of film, there are a number of cinemas in Leeds. These include modern multiplex cinemas, with one in The Light Shopping Centre in the city centre and another easily accessible by car on Kirkstall Road. Among the best are the Cottage Road Cinema, open since 1912, and the Grade II-Listed  Hyde Park Picture House, a gas-lit Edwardian cinema built in 1908 that has shown films since 1914.

Every year since 1999, Leeds has hosted a major Music Festival over the August Bank Holiday weekend, the northern equivalent of the Reading Festival. Since 1986, every November, Leeds has hosted the largest International Film Festival in Britain outside London.

There are many sporting venues in Leeds that can be visited and matches watched in. Unusually, the people of Leeds traditionally are prouder and more supportive of their Rugby teams than football, except when Leeds United are doing well in the Premiership.

There are also athletics facilities, bowling lanes, several golf courses and some basic swimming pools with diving facilities, although sadly Leeds does not have a swimming and water park complex. Leeds also does not have a permanent ice rink, but an outdoor facility is traditionally erected after Christmas in Millennium Square. 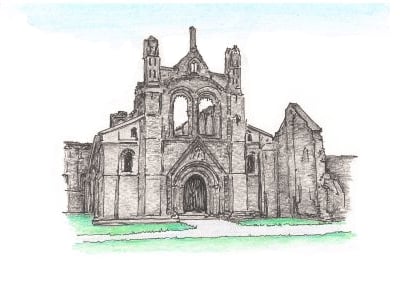 Although nearby historic York is by far the prettier city and more popular with tourists and visitors, industrial Leeds has a wide range of attractions that should more than entertain any visitors.

The best place to start any visit to Leeds is Yorkshire Gateway, a Tourist Information Centre located in Leeds Station.

Places to visit in Leeds include:

Other Leeds landmarks include the Dalek, currently Leeds' tallest building, visible up to 25 miles away. Officially known as Bridgewater Place, it was instantly renamed by locals as its shape can only be described as being that of a Dalek. Leeds also has a distinctive Town Hall, declared open by Queen Victoria in 1858, the Corn Exchange, dating from 1863, and the shiny, white Civic Centre, built in the 1930s.

A Quick Summary of Leeds' History and Industry

'Loidis', was first mentioned in The Ecclesiastical History of the English People by the Venerable Bede in 731 AD. 'Ledes' was also mentioned in the Domesday Book of 1086. Leeds was originally a cluster of buildings around what is now Briggate and the river Aire. It has since spread phenomenally to include several previously outlying towns and villages.

From small beginnings, the population steadily grew to over 30,000 at the end of the 17th Century through the wool trade. English wool, including Yorkshire wool, had the reputation of being of the finest quality throughout mediæval times. However, it was the Industrial Revolution that dramatically changed the fate of this previously unremarkable town. The nearby supply of iron ore, its central position and the navigable river Aire made Leeds a natural focus point for making and trading textile goods. This provided an enormous boost to the Leeds economy, with the population growing to 150,000 by 1840. The nearby plentiful countryside for rearing sheep, local supply of coal, iron ore and cheap labour made it a powerhouse of the 19th-Century cloth industry, and when Leeds became a city in 1893, its population had boomed to over 503,000.

Leeds was typical of many northern industrial towns of the 19th Century. The Industrial Revolution had provided transport, employment and industry, but brought with it the associated problems of overcrowding and inadequate infrastructure, which led to health and social problems, including a series of cholera epidemics.

The outward face of Leeds was becoming ever more grand, with elaborate new buildings such as the Town Hall, opened by Queen Victoria; the University, the Corn Exchange, Kirkgate Market and the recently refurbished grand covered arcades leading between many of the major shopping streets. In keeping with its reputation as a shopping haven, Leeds can lay claim to being the birthplace of many a British institution. In 1822, Joshua Tetley set up his brewing business in Leeds, although Tetley's Leeds Brewery was closed in 2011, Tetley's having been taken over by Carlsberg in 1998. Michael Marks, later to team up with Tom Spencer, started his first penny bazaar in Leeds Kirkgate market in 1884. Clothing chain Burtons also started in Leeds in 19107.

Since the Industrial Revolution, Leeds has expanded its commercial interests to include banking, insurance, call centres, retail and IT. This, combined with an increasing public awareness of the benefits of urban planning, slum clearance and historical preservation, have provided an enormous amount of commercial and residential development, to make Leeds what it is today - a buzzing and interesting place to live.

Despite the reputation the north of England has for bad weather, Leeds' situation east of the Pennines means that it suffers much less rain than the counties to the west, as much of the rain-bearing cloud coming from the Irish Sea and Atlantic empties itself prior to climbing across the mountains. Generally the climate is one or two degrees colder than the south coast of England.

1After London and Birmingham.2Population figures are taken from the 2001 census; other sources say up to 730,000.3And vice versa if you're facing downhill. If you go over the crest of the hill, you're no longer in the central shopping district.4Joseph Priestley, John Harrison, James Watt and Doctor Walter Hook.5Prince Edward, son of King Edward III, who lived 1330-1376. Heavily involved in the Hundred Years War, Edward was considered in England to be the epitome of chivalry, with a rather different reputation in France. Prince Edward died a year before his father.6Elland Road has also hosted Rugby League finals, internationals and even international finals.7Although Montagu Burton had previously owned the Cross-Tailoring Company in nearby Chesterfield.8Leeds does not have an Anglican Cathedral. Since Easter Sunday 2014 the city has been within the Anglican diocese of West Yorkshire and the Dales, a merger of three dioceses: Bradford, Ripon & Leeds and Wakefield. Between 1999 and 2014 the city was within the Anglican diocese of Ripon and Leeds, centred on Ripon Cathedral. Between 1836 and 1999, Leeds was within the Diocese of Ripon, which was renamed to reflect the importance of Leeds. Before 1836, Leeds was within the diocese of York.