Falconry Content from the guide to life, the universe and everything 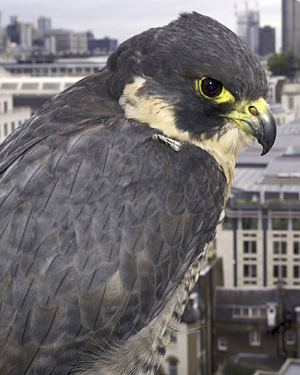 Falconry is the process of training a raptor to hunt other animals for you. The falconer trains the bird to let him tag along while it goes about the business that comes naturally to it. The human is there to help the raptor find game that the human wants. In cases where the raptor is purchased as a young thing, the human's job is to teach it to fly well, give it lots of opportunities to learn how to catch things, and give the bird confidence as a hunter.

In falconer parlance the words 'raptor', 'hawk' and 'falcon' are often used interchangeably when speaking in general terms. 'Raptor' is the broadest term and includes any bird of prey: hawk, falcon, owl, eagle or vulture.

In the sport, most falconers use hawks1 or falcons2. Falconers also describe birds by shape; buteos, accipiters and falcons are broadwings, shortwings and longwings, respectively. There are also differences in hunting styles.

There are indications of falconry practice going back to about 2,000 BC. It is generally believed falconry originated in Central Asia and had arrived in Italy by 560 AD. In Europe, falconry reached its peak of popularity in the Middle Ages. During this time a system was instilled which relegated specific breeds to specific classes of people; for example only the Emperor could possess an eagle, the King a gyrfalcon, and so on and so forth down to the holy-water clerk, who was allowed a kestrel. Possession of an out-of-class raptor could lead to jail time or worse. Since the introduction of the far more efficient gun, falconry has experienced a decline in popularity, and is now only practised by a few who regard the human relationship with a raptor as an art form.

Hunting is often not considered politically correct or economically necessary in prosperous parts of the world, but it and falconry are still legal almost everywhere else. Laws regarding falconry vary from country to country. In England raptors can be purchased by anyone, without any assurance that it will be hunted or even flown (although there is strong social pressure to do so). In Holland, the number of falconry licenses is fixed at 131, and the only way to obtain one is when a license holder relinquishes it or dies.

To become a falconer, the following steps should be taken:

Technical details aside, falconry takes a lot of time, averaging one to two hours each day and extra on weekends during the hunting season. The raptor needs to be outdoors daily, their quarters must be kept clean, they like to be around people frequently, and must be fed daily. The falconer must have daylight time to fly, and it is primarily a winter sport. Many people who get into falconry don't do well because they find they didn't have as much time as they thought. Falconry causes arguments over time not spent with the spouse, and over the torn bloody furry corpses dripping in the refrigerator.

Training is the most interesting part of falconry. The basic element of training raptors, like other animals, is food. Unlike other animals they understand little else. Raptors are fed, a small bit or a large bit, whenever they do something correctly. Undesired behaviour receives no reward. The first thing a hawk learns is that when the falconer is around, interesting things happen, and food is one of those things. Food rewards are associated with a whistle so the falconer can call his raptor's attention from afar and have it return to him.

The first thing a falconer learns when dealing with a new bird, is its response weight: the highest weight at which the bird returns consistently to the falconer when it is called. At this weight, the raptor should have a little bit of fat for energy, but not so much that it thinks it doesn't need the falconer. A falconry bird should never be completely fatless, and if one is, its owner is doing something terribly wrong.

By keeping the raptor around this weight, all other training can be accomplished. By their nature raptors prefer scheduled, consistent behaviour; perching, flying, hunting and eating are done at specific times of day. If the trainee has not learned what the falconer wants it to learn, it may not be fed until evening. Step builds upon step; first the raptor must hop to the glove, then fly a short distance to it, then a long one; then the bird is taken around quarry. Whenever it does the right thing, hopping to the glove, chasing game or grabbing it, the raptor is rewarded immediately, in proportion to the accomplishment. Catching game is rewarded with a full meal. The date of trapping to catching game is anywhere between three and eight weeks, but speed is not really the issue. Reinforcement of habit is the essential part.

After a period of time together, the raptor learns the style of its falconer and comes to know what is expected of it, and what it can expect the falconer to do. At this time the consistency of rewards can be loosened. At this time also, the falconer can begin to teach the raptor to step off the game so that it can be released alive, or at least without puncture marks so it looks good on the table.

Raptors should always be parasite free and many are given a preventive dose of worming medications and antibiotics annually. They moult once a year, starting in spring, and the moult can continue until late summer. A falconer may choose to fly their bird during this time, but many don't because hunting seasons are closed for most quarry, and instead encourage a rapid, full-feathered, healthy moult by letting the bird eat as much as it wants.

Quail is the most nutritionally complete food for raptors, but it lacks carotene, so chicken or duck can be given occasionally to make up for it. The best diet is a variety of different items, and the fur/feathers and bones, which are an essential part of the raptor digestive process, should be included. Hawk food is best served fresh, but frozen food, also whole, is acceptable as long as it isn't freezer-burned or more than six months old.

Perches should be 'soft', ideally covered with Astroturf, to prevent bumblefoot, a crippling disease that causes the foot to swell up and close. Because of the soft perches, talons and beaks need to be trimmed regularly. Living areas should be protected from rodents and other predators, including dogs and small humans. Accipiters are particularly susceptible to aspergillosis, a respiratory ailment caused by mould. Raptors should get daily sunlight, bath water should always be available and, of course, they should be flown as much as possible.

Generally there are two basic hunting styles: glove and lure. A 'bird of the glove' rides on the falconer's glove while he walks and flushes game. In nature, buteos and accipiters hunt from perches so they are flown in this manner. The quarry is most often ground quarry: rabbits, squirrels and walking birds such as quail, partridge or pheasant. A spin-off of glove hawking is 'pole hawking', where the raptor follows the falconer from pole to tree to fence, rather than being carried.

A 'bird of the lure' refers to falcons. Falcons hunt from the sky and are trained to circle around the falconer anywhere between 300 and 1,500 feet up. When quarry is flushed the falcon drops from position in a spectacularly steep dive. Quarry for falcons are other birds of all types, but ducks, grouse and pheasant are the favourites. Since they often fly far enough to be out of earshot, the lure is used instead of a whistle. A lure is basically a bird-shaped leather pillow on a string, with the same food association as the whistle, and it is swung in the air to call the falcon's attention.

Many glove falconers are able to practice catch-and-release. Hawks do not kill quarry the moment it touches it, unless the quarry is very small. Rather, the hawk holds and controls the prey until the falconer arrives. The falconer gets control of the captured animal, then offers the hawk a different piece of meat (quail or a piece of previously captured game). About 80% of captures can be released. However, the power of a falcon's stoop makes it difficult to release game: if the quarry is struck at all, it is often at least maimed. Many longwingers fly their birds after homing pigeons if they are unable to get to wild game.

However, falconry is not entirely about hunting. Catching game is only a symptom of a close relationship, consistent training and frequent flying. Falconry becomes an art when the falconer understands a bird well enough to figure out how to bring out its best.

1The genii of the hawk are buteo and accipiter.2The genus of the falcon is falco.