Cinemas in Leeds, West Yorkshire, UK Content from the guide to life, the universe and everything 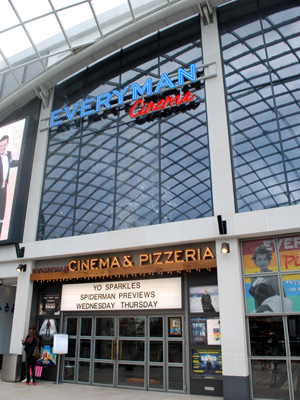 The city of Leeds in Yorkshire is the birthplace of film. On 14 October, 1888, Louis Aimé Augustin Le Prince made the first photographed and projected motion pictures in Leeds, The Roundhay Garden Scene. This was followed by a film of people and traffic crossing Leeds Bridge, known as Leeds Bridge.

Appropriately there are a number of cinemas in Leeds. These include different types of cinemas, from historic Edwardian cinemas to the most modern multiplex cinemas. Every year since 1986, Leeds has hosted the largest International Film Festival in Britain outside London.

A Guide to the Main Cinemas in Leeds

There are two multiscreen cinemas in the heart of Leeds city centre and larger cinemas on retail parks on main roads, as well as older art-house cinemas.

The Everyman Cinema opened in Spring 2013, when the new Trinity Centre, a vast shopping complex in the heart of the city, opened. At the time of writing the Everyman cinema is the most expensive cinema in Leeds; however, it is also the most luxurious. Instead of the standard cinema seat, every seat is either a sofa or armchair, complete with cushions. There are coffee tables rather than cup-holders, leg room and foot-rests. Screens 1 and 2 also have gallery seating.

There are four screens, not to mention a room with a television labelled 'Screen 5½', and the cinema screens not only show the latest blockbusters but also a range of arthouse and older films. The cinema does not offer concessions such as Orange Wednesday or Student Discounts. It does offer a range of food, and has its own pizzeria, although there are numerous restaurants nearby in the Trinity Centre.

Located on Level 4 of the Trinity Centre, the cinema offers a splendid view over the city centre from the outdoor seating area. Being located at the very heart of Leeds means there is a wide range of transport links, especially as it is opposite the railway station. There is no dedicated parking, with the nearest car park, the Trinity Centre car park, a short walk away, a journey which includes crossing a fairly busy road. There is a parking charge, but rates are reasonably cheap in the evenings.

Also in the very centre of Leeds is the Vue Leeds – The Light 14-screen cinema. It is based on the first floor of Leeds' second newest shopping centre, called the Light, which opened in 2001 and is located on the Headrow.

The cinema has a large number of screens mainly showing the latest big films. There are a number of cafes and restaurants located nearby if you want to eat first, but if you are waiting for a film to start there is very limited seating outside the screens.

When it opened in 2001 as a Ster Century Cinema, it claimed that the screens were the largest non-IMAX screens in Europe, and they remain larger than any other cinema screens in Leeds. The seating is very good as you would expect for a new venue. Strangely, the drink holder is annoyingly very low down near your toes, making picking up and putting down your drinks very difficult. There are a number of VIP seats, which obviously cost more. It has good toilet facilities, though.

Parking is available in The Light car park, chargeable at an hourly rate. This claims to be among the most secure car parks in the city centre, and is more expensive than other car parks, but a loyalty card scheme operates. A nearby NCP car park is, at the time of writing, cheaper for an evening's parking.

Opening in November 2019, the Cineworld White Rose is an 11-screen cinema. It includes an IMAX screen as well as Screen X, which boasts a 270° multi-projection panoramic screen (this means that the screen's side walls are also a screen, although few films utilise this). The chairs recline very slightly, but there is little legroom and the armrests cannot be lifted. For a new cinema, the seats are not as comfortable as other cinemas'.

The White Rose is Leeds' largest shopping centre and is on the A653 Ring Road near Junction 28 of the M62 and Junction 1 of the M621. There are 4,800 free car parking spaces and buses are regular, yet although two railway lines pass the shopping centre there is no station. There are a wide range of shops and restaurants.

Another cinema is the Vue: Kirkstall Road Cinema at the Cardigan Fields retail park on Kirkstall Road. This is a nine-screen cinema that mainly shows the latest blockbusters. Seating is generally good, although try to avoid booking the front row. Some of the screens have seats right up to a couple of feet from the screen, giving viewers sat in them a very limited view and a painful neck if they then foolishly attempt to watch the film they have paid to see. There are a number of VIP seats, which cost more.

The cinema opened as a Warner Village Cinema in 1998, becoming a Vue in 2004. This cinema is three miles from Leeds city centre, so though it is walkable, catching a bus is advisable. There is a large car park and parking is free. Also at the site are a number of restaurants as well as a bowling alley, gym, supermarket and nightclub.

Leeds' Showcase Cinema is at the vast retail park complex found off the A62, also accessed from Junction 27 of the M62 and the unnumbered junction of the M621. It has been open since 1989 when it was a 12-screen, but gradually it has expanded and been modernised to become a 16-screen, the largest cinema in Leeds. It usually shows the main blockbuster films.

Again the cinema is surrounded by restaurants, shops, etc, and there is a large free car park. The screen offers VIP seats as well as XPlus screens, which are larger than their standard ones.

The Leeds/Bradford Odeon is about as far out of both Leeds and Bradford as you can get, so if you're in the centre of Leeds then this isn't really the place to go. Located in the Gallagher Leisure Park on the Thornbury roundabout, it is off the A647 Leeds Road, opposite a McDonald's.

Again there is a large free car park at this 13-screen cinema which boasts an ice-cream bar as well as nearby restaurants, a gym and a bar.

This independent cinema is in the north of Leeds in Headingley on the A660 Otley Road, a location near both the University of Leeds and Leeds Metropolitan University's halls of residence, an area locally nicknamed 'Student Ville'.

Cottage Road Cinema shows a wider choice of films than an average multiplex, and has been showing films since 1912. As an Edwardian cinema with character it only has a single screen with 468 seats, and does not have wheelchair access or toilets suitable for disabled people.

There are no dedicated parking facilities so visitors need to beware of parking restrictions on the local roads.

The Grade II-Listed  Hyde Park Picture House is a gas-lit Edwardian single-screen cinema built in 1908 that has shown films since 1914. It celebrated its centenary in 2014.

The Hyde Park Picture House Cinema has an outside ticket-booth, old-fashioned stage, balcony, and an overall historical feel. It sometimes offers live music to accompany older silent films. On the down side it is hard to find with no signposts, located along a 20mph road with limited parking, and endless speed bumps instead. Although there are wheelchair spaces available in the theatre, the toilets are not accessible by wheelchair.

Unquestionably the ultimate time to see a film in Leeds is during the annual Leeds Film Festival. In addition to the cinemas mentioned above, films are also shown at a number of additional venues throughout the city and neighbouring areas, including:

Additional screenings are held within Leeds' universities' lecture halls, with film-related art on display in the City Art Gallery, Otley Courthouse and in the new arts centre housed in former brewery, The Tetley.

Leeds has had numerous other cinemas since the invention of film in 1888 that have since closed. Two historic cinemas have sadly closed in the early 21st Century.

The Lounge opened in 1916 and closed in 2005, shortly after a multi-million pound makeover failed to attract customers back from the multiplexes. The building was demolished in 2012 to make way for flats, although the cinema's classic façade was retained.

Similarly Leeds Odeon (1932-2001), which originally opened as the Paramount Cinema, was closed when it was felt it would not be able to compete with the neighbouring Ster Century Cinema then under construction (now Vue - The Light). The building's exterior is Grade II Listed.

If you are a firm film fan and in the area, why not visit Bradford's nearby National Media Museum1? This is a fascinating free museum with an extensive cinema collection, and also the location of the UK's first IMAX cinema and the closest one to Leeds. Although Leeds does not boast an IMAX cinema, another one in West Yorkshire is located just outside Castleford.

1Formerly known as the National Museum of Photography, Film & Television.