Doctor Who Enemies: Daleks Content from the guide to life, the universe and everything 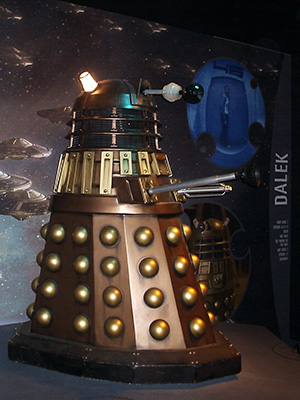 Daleks are without a doubt the most readily recognised bad guys from Doctor Who, a British science-fiction television show that aired from 1963 to 1989. Created by Terry Nation, Daleks can be loud, obnoxious, and rather ridiculous at times, but one cannot help but love them.

According to the show, Daleks were mutated life forms that were placed in mechanical suits for survival. They started out as Kaleds, who were humanoids living on the planet Skaro. For whatever reason, the Kaleds got into a nuclear brawl with the Thals (some other humanoids on Skaro), which resulted in the virtual extinction of the Thals and the extreme irradiation of the planet. The radiation caused the Kaleds to mutate into small, defenceless, green blobs. Realising that his race would eventually end up as blobs, a Kaled scientist named Davros developed robotic armour suits (shaped rather like salt shakers) to contain, support, and defend the mutated Kaleds. These became known as Daleks.

Apparently, the Daleks were fruitful and multiplied to the point that they started conquering much of the galaxy. They even took a few pot-shots at Earth, but these were of course (mostly) defeated by the Doctor. Several thousand years after his supposed death following the creation of the Daleks, Davros reappeared and split the Daleks into two factions: those who were loyal to him and those who were not. This caused all sorts of problems and led to plenty of fighting (as well as a few really good episodes).

It was never made entirely clear why the Daleks were so ill-tempered. They were totally evil with no redeeming qualities whatsoever. Indeed, it seems as though their primary motivation was to conquer and enslave as much of the universe as possible; a remarkable goal considering that it took them several thousand years to learn how to conquer a flight of steps.

No discussion of Daleks is complete without a mention of the repeated failure of the show to address why Daleks were so feared when all one has to do to escape them is go upstairs. Daleks have no legs; they move by rolling along the floor. It was not until the 25th season story 'Remembrance of the Daleks' that the Daleks finally developed a hovering ability that allowed them to go up or down stairs. Of course, they still couldn't go fast enough to actually catch someone running away...

In any case, Daleks were always thoroughly deadly despite the obvious disadvantages presented by having only one eye, no legs, and a solitary toilet plunger for an arm1.

The Appeal of Daleks

At first glance, one might not think that Daleks would create much of a following. However, there have been times, particularly in the earlier days of Doctor Who, when people have been gripped by a veritable Dalekmania. Toys, wall plaques, salt and pepper shakers even postage stamps have been made from Daleks. Why do people like them so much?

First of all, Daleks were the first of the alien baddies encountered on Doctor Who. They first appeared in the second Doctor Who story and reappeared throughout the show's history. They became the quintessential enemies of the Doctor, second only to (perhaps) the Master.

Part of their appeal undoubtedly lies in their complete evil. A Dalek would never do a good deed. Ever. They are exactly the type of villain that we love to hate. They are easy to cast as evil because they aren't even remotely human. A lot of TV robots at least have arms and legs, but not so with Daleks. Their organic component doesn't even have anything that can be recognized as human. They are completely without souls.

To a certain degree, people like to root for the bad guys, especially the really, really bad guys. Perhaps it is part of the darker side of human nature. The great thing about the Daleks, though, is that everyone can feel safe liking them because they never stand a chance of winning against the Doctor.

In these days of computer graphics and million-dollar special effects, many people will probably look at Daleks as being a hokey relic from a hokey TV show. If you try to take them too seriously, you probably won't like them. Likewise, if you automatically write them off as being stupid, you will deny yourself the opportunity to see their unique charm. Daleks can rank among the greatest and most enjoyable villains of all time if you just try to have fun with them.

1In the feature films Doctor Who and the Daleks and Doctor Who: Dalek Invasion Earth 2150 AD there were a few Daleks who had functional claw-arms, but there weren't enough of them to pose a serious threat.