Doctor Who Enemies: Michael Grade Content from the guide to life, the universe and everything 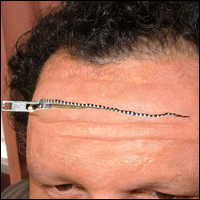 Born in 1943, Michael Grade is famous for his career as a British television executive, including being chairman of the BBC and executive chairman of ITV.

After a career in newspapers and as a theatrical agent, in 1973 Grade became Deputy Controller of Entertainment Programmes for ITV's London Weekend Television. In 1981 he was appointed president of Embassy Television in America, and in 1984 became Controller of BBC1, which he described as 'the biggest pay cut in history'. One of his first acts was initially to cancel the second series of Blackadder, but later mitigated this decision to postponing it for three years and slashing its budget. Blackadder was later voted the second greatest British comedy of all time1 in a 2004 poll.

As controller of BBC1, Grade began eradicating science-fiction, beginning with cancelling the excellent Tripods trilogy (1984-85) after the second series so that the conclusion was never made. He believed television should be dominated by soaps, creating EastEnders (1985+) and Southampton-based soap Howard's Way (1985-90), and purchasing Australian soap Neighbours (1985+). In order to fund these soap operas he decided to also cancel Doctor Who (which had begun in 1963) on the grounds that 'it looked cheap', even though he had the power to increase Doctor Who's budget.

Grade decided to cancel Doctor Who quietly on the side in January 1986, only to be horrified when this decision naturally dominated news headlines and even led to a charity single, 'Doctor in Distress', by Who Cares. Doctor Who returned 18 months later with a shorter television run of 14 rather than 26 episodes. The following year Grade fired Colin Baker from his role as the Doctor.

In 1988 Grade moved on to become Channel 4's Chief Executive and in 1999 became Chairman of the Pinewood and Shepperton Film Studios Company. In 2002 he appeared on Room 101, which was inspired by George Orwell's novel Nineteen Eighty-Four. Doctor Who was one of his choices to go into the mythical torture room designed to hold the 'worst thing in the world'.

In 2004 he became Chairman of the BBC, and in 2005 admitted that, actually, Doctor Who was a good show after all, writing:

From clunky Daleks that couldn't go up and down stairs to the filmic qualities today of Doctor Who, it's a transformation. The show still leaves me cold, but I admire it, which I never did before.

This shows his ignorance of the programme during his tenure at the BBC, as a Dalek was seen hovering in the 1985 episode 'Revelation of the Daleks', and one ascended a staircase in 'Remembrance of the Daleks' (1988).

Grade became Executive Chairman of ITV plc in 2007, but retired in 2009. In 2011 he was appointed Baron Grade of Yarmouth, Isle of Wight.

1After Only Fools and Horses.