Doctor Who Enemies: Cassandra Content from the guide to life, the universe and everything 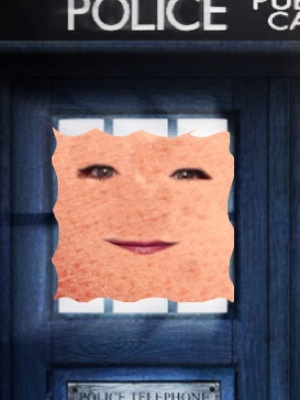 Cassandra was the first recurring 'human' villain encountered in the restored long-running science fiction series, Doctor Who. Appearing twice and encountering both the Ninth and Tenth Doctors, she described herself as being the last 'Pure' human, while being almost entirely devoid of any trace of humanity. Despite this, her touching death scene almost gives a sense of redemption.

You're not human, you've had it all nipped and tucked and flattened until there's nothing left. Anything human got chucked in the bin. You're just skin, Cassandra. Lipstick and skin.
- Rose Tyler describing Cassandra

Lady Cassandra O'Brien Dot Delta Seventeen considers herself the last 'pure' human. Born the son of a Texan father and a mother from the Arctic Desert, she grew up in the Los Angeles Crevasse. Her parents were the last people to be buried on Earth. At some point in her lifetime she became female and has had at least five husbands. She remains unfazed about changing sex; the second time she is encountered she takes possession of both Rose and the Doctor's bodies as well as that of Chip, a male 'half-life' clone with a short life-span.

While the rest of the human race went to every star in the sky and interbred with the other humanoid races they encountered1, Cassandra remains of human descent, and she derogatively calls other members of mankind 'Mongrels' and 'Mutant Stock'. In fact mankind merely evolved as Cassandra conservatively stood still.

The Doctor first encounters her on board Platform One orbiting Earth on its last day, in the year 5.5/Apple/26, which is 5 billion years in the future. Cassandra no longer looks human, as after having 708 operations to amputate any conceivable curve or shape, her brain is kept in a glass jar2 beneath her body, a perfectly flat, thin piece of skin pegged and stretched on a square frame above. Her skin is almost transparent, with veins and arteries visible, with the only recognisable features being her eyes and mouth. Rose Tyler nicknames her 'Michael Jackson'.

Shortly before she is first encountered, she had undergone an operation to remove her chin. She plans to have at least one more surgical procedure to bleach her blood. The result of these operations has left her feeling 'not a day over 2,000', which means she is one of the very few mortal characters that the Doctor encounters who is older than he is. Perhaps because of this, she needs to be accompanied at all times by humanoid surgeon servants who keep her moisturised; if her skin dries out then it could explode. The canisters containing her moisturising spray also contain acid, should she feel threatened and need to be defended.

Do you think it's cheap looking like this? Flatness costs a fortune.

Cassandra is one of the vainest people that the Doctor encounters. When hiding in the hospital basement in 'New Earth', she spent her time watching old films of herself. Yet this vanity marks a vulnerability; she is watching the Ambassador of Thrace reception, the last occasion on which anyone said she was beautiful. This was in her much younger days before any operations removed her human shape, when she looked like an ordinary woman wearing a classy, 1930s-style evening gown.

Cassandra was played by Zoë Wanamaker. Her impact was great enough that show-runner Russell T Davies chose her to be the recurring villain introduced at the start of the revived show's second series as a means of helping a young audience adapt to the new Doctor and reassure them that he was the same character. Some fans have speculated that the character was inspired by the character of Cassandra in Red Dwarf series VIII's episode of the same name.

Listed below are the two Doctor Who stories to feature Cassandra.

In the second episode of the new series, the Ninth Doctor and his companion Rose travel to the far future and see the Earth destroyed.

The Doctor takes Rose on her first real trip in the TARDIS to the year 5.5/Apple/26, which is 5 billion years in the future. They land on Platform One, a space station orbiting Earth on its last day before it is due to be destroyed by the expanding sun, and the Doctor bluffs his way into the station's reception by using Psychic Paper for the very first time. Also on Platform One to watch this event are various alien races, including the enigmatic Face of Boe, Jabe of the Forest of Cheam3, the Adherents of the Repeated Meme from the Financial Family Seven and Cassandra, the last human, who has brought with her the last ostrich egg and a 1950s juke box which she believes is an iPod4.

Yet the silver balls brought by the Adherents of the Repeated Meme secretly contain mechanical spider-droids that sabotage the space station. The Doctor deduces that Cassandra is behind the scheme. She hopes to either engineer a hostage situation in order to get compensation to pay her surgical bills, or if that fails, she has shares in the guests' rival companies and will make a profit from their increased value should those on board Platform One die. As the sun is about to kill all on board, she teleports away; however, the Doctor saves the day despite an inconveniently located reset button. He reverses the polarity of the teleportation field's neutron flow, bringing Cassandra back to Platform One. The atmosphere is much hotter than previously, so her thin body quickly dries out in the heat and explodes as she is not moisturised. Earth having been incinerated, the Doctor and Rose return to the present day to eat chips.

'The End of the World' was a 45-minute episode written by Russell T Davies and directed by Euros Lyn.

The lady's moving on. It's goodbye trampoline, hello blondie!

Yet secretly Cassandra lurks in the basement, tended only by force-grown clone Chip. He is a 'half-life man' who has been tattooed with Cassandra's favourite pattern - he worships Cassandra and sees to her physical needs6. Although Cassandra's body had exploded, her brain in a jar was kept safe and her eyes were able to be saved. Her new flat body is taken from skin from her back, rather than her original skin from her front. However Cassandra has a body-swap device called a Psycho-Graft and uses it to take possession of Rose Tyler7. Cassandra's body and brain are destroyed in the process.

Although her initial reaction to being in Rose Tyler's body is critical, she soon finds her new form physically attractive:

Oh my god, I'm a chav! Look at me, from class to brass – although ooh curves, oh baby, it's like living in a bouncy castle... Nice rear bumper.

Cassandra is able to access Rose's surface memories, learning that Rose has been accompanied by a new-look Doctor, although she believes he underwent surgery to change his appearance. Despite loathing the Doctor, blaming him for her earlier demise, her joy at having a three dimensional physical form again leads her to kiss him passionately. Together they learn that the cat nuns have been performing medical experiments on created Flesh8, people who were born to be disease carriers. When the Doctor discovers that she has possessed Rose, Cassandra stuns him with a knock-out perfume and unleashes the plague carriers, who inadvertently kill anyone they touch. The hospital is quarantined and those inside are unable to escape. Surrounded, the Doctor refuses to help unless Cassandra leaves Rose's body. After temporarily possessing the Doctor, Cassandra enters a Flesh body. For the first time she then experiences pity for another. Back as Rose, she assists the Doctor in finding a cure for their condition.

After they have been cured, the Doctor insists that Rose is restored and so Cassandra possesses Chip. However the strain of hiding from the Flesh has been too great for him and he collapses. The Doctor takes Cassandra as Chip back to the Thracian reception, the last time Cassandra was truly happy, where the Chip-Cassandra tells her younger self that she really is beautiful, before dying.

'New Earth' was a 45-minute episode written by Russell T Davies and directed by James Hawes.

1It is a science fiction fact that aside from an odd bumpy forehead here and there, almost all sentient races in the Universe appear remarkably human (including Time Lords) and mankind will breed with anything.2Cassandra is not the first brain in a jar the Doctor has encountered, although like the others she is not known for charity work. Other brains in jars the Doctor has met include the people of Morphoton in 'The Keys of Marinus', Arcturus in 'The Curse of Peladon' and the remains of renegade Time Lord Morbius in 'The Brain of Morbius'.3Sentient trees evolved from Earth's woods.4Her musical choices include 'Tainted Love' by Soft Cell and 'Toxic' by Britney Spears.5Usually called 'New New York' for short, the city is a bit like a futuristic York, only fifteen times newer.6Which Rose hopes only means food.7Actress Billie Piper was asked to wear a Wonderbra in the scenes in which Rose Tyler's body was possessed by Cassandra, although when the Doctor's body is similarly possessed, David Tennant did not.8It is unclear whether the Flesh clones are related to the Flesh duplicates that the Eleventh Doctor later encounters with Amy Pond.