The Ostrich Content from the guide to life, the universe and everything 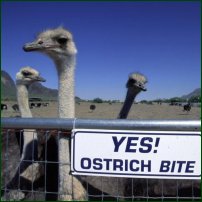 The ostrich is a member of the family Struthionidae in the order Struthioniformes. It is classified as Struthio camelus. This translates from the Greek as 'sparrow camel' and it refers to the perceived strangeness of the creature. It is also the largest, strongest living species of bird in the world. Ostriches are so strong they can carry the weight of a small man1. The ostrich is native to Africa; they were once found in the Middle East but due to excessive hunting they are no longer found in this area. A very adaptable bird, the ostrich is found in rocky areas, deserts and open savannas and will live for between 30 and 70 years (an average of 50 years).

The ostrich grows to roughly 2.4m (8 feet) and weighs between 90 and 130kg, though some males have been recorded at 155kg. Ostriches have small heads with large eyes and short, broad beaks. They have long necks and legs which have no feathers on them at all. Their eyes, which are considerably larger than their brains, are framed in thick black eyelashes; in fact, an ostrich's eyes are the largest eyes of any living land animal.

The male ostrich has black feathers with white tail and wing feathers. The female, on the other hand, is a dull brown. Ostrich feathers are used by the bird for insulation. These feathers differ from regular stiff airfoil feather used by flying birds and this makes the wings unsuitable for flying. Instead, the wings are used by the males for mating displays and cover for chicks. The wings of an ostrich can also be used to scare off potential predators. It is interesting to note that the wings of an ostrich have two small claws at the tips. The feathers on a male ostrich are very large and very soft and have a considerable commercial value. This has caused them to be hunted in the Middle East and has lead to their extinction in this area.

The chicks of an ostrich are very different to your average British garden bird; the robin, for example. Ostriches are born with feathers and within the first few hours they are up and running. The chicks grow very quickly; about 25cm a month for the first year. They will stay with the family group till they reach sexual maturity at two to four years old.

One of the factors that make the ostrich famous is its long legs. These legs, as well as the neck, are featherless. At the base of the legs there are two toes; one is considerably larger than the other, and resembles a hoof. This evolutionary trait seems unique to the ostrich, and appears to aid the ostrich when running. With these legs, an ostrich can reach 40mph (65km an hour). While running, ostriches raise their small wings. They start to stretch out their longs legs and take massive strides. An ostrich will also use these long powerful legs for defence; they can give a nasty kick that puts off a lot of predators.

Like most desert animals the ostrich can go for a while without any water. When water is short they can take water from the plants that they digest. However, once they can find water they will drink their fill and if they can they will frequently take a bath.

The ostrich is an omnivore2. While it eats various insects to gain protein, its main food source is plant material and seeds. Curiously, the ostrich will also be seen to eat pebbles. This is due to the fact that it does not have any teeth and uses the stones to digest food in its gizzard.

Male ostriches are polygamous3 and travel about in hot, sandy areas with three or four females each. Alternatively, they can travel in groups of four or five males accompanied by mates and young. It is also common to find a group of them with groups of grazers such as zebras and antelopes and other herbivores. These are matches made in heaven. The ostriches gain strength in numbers and the grazers gain a ready-made security system. Ostriches have very good eyesight and coupled with their excellent hearing, they give plenty of advance warning of potential predators.

Once an ostrich reaches the age of sexual maturity, at about two to four years old (the female ostrich reaches sexual maturity six months before the male), the group dynamic changes. The mating season starts between March and April and ends in September or October. This obviously varies depending on the region, but not by very much. In much the same way as other group animals do, the males will fight for the right to mate with the females. These fights can become nasty, but normally the males will just hiss at each other. The winner of these fights will be allowed to breed with all the females. The male, though, will form a strong bond relationship with one female. This pair is known as the alpha male and alpha female.

The gestation period for an ostrich is about six weeks. The ostrich digs a hollow and lays about 20 eggs in the ground, which all the females will lay their yellowish-white eggs together in one communal nest in the sand. Sometimes in captivity the eggs are dropped randomly and it is up to the keepers to place the eggs in a group. Eventually the female gets the idea and starts to lay them in the group.

The eggs weigh about 1.4kg (about 3lb) each and have a volume of about 1.4 litres (about 3 pints). With the increased size of the eggs, the shell has to be stronger than an average egg from a chicken or it would collapse in on itself. These are some of the biggest4 eggs laid in the world and are a delicacy in some cultures. The incubation of these eggs is shared between the two parents. The female incubates the eggs in the day and the male at night. There is a very important reason for this: this system makes the best advantage of the camouflage that the ostriches have. The eggs will hatch after 42 days of incubation. Once hatched the chicks will be looked after by the father.

This is something that has to be seen to be believed. The male will crouch down on the floor and will move its head and neck in an oscillating motion. The wings of the male ostrich will be put up behind the neck as a sort of fan, a lot like that of a peacock. This display is very alluring to the female ostrich and shows the fertility of the male. Of course, this can be used on the flipside as a warning dance. When the male ostrich is incubating the eggs, he is very vulnerable to attack. This dance is enough to scare off most predators. If this does not work the male ostrich is very quick from a sitting start and he will normally chase the predator off. Most predators are put off by the powerful kick. Of course, during this chase the eggs are vulnerable, but there is always more than one male there at any time to protect them.

If an ostrich meets a predator or any other kind of danger it will normally run away or fight, but if the ostrich is injured or looking after chicks it will lay down with its head on the ground, with its wings and tail flat. This works really well for the females, because the drab brown feathers of the female makes her look like a mound of earth. The chicks will either copy the parents or run into long grass. Of course, this depends on the age of the chicks; they might run under mum or dad and hide that way. This technique is sometimes even used by the males but they are not naturally suited to it; they are more camouflaged at night.

Where to See Ostriches

Ostriches can be seen in lots of zoos around the UK. They are also kept on various safaris. For example, ostriches are also kept at Longleat Safari Park in Wiltshire. There is actually a television series filmed there called Animal Park, where the resident ostriches are sometimes shown. This is also a good place to go if you are interested in seeing chicks. Trevor, the resident male ostrich, has fathered the first set of chicks bred at Longleat.

The Ostrich has been farmed all over the world, even in Sweden. They have been farmed in the UK since the 1980s. They are easy to keep and can provide a variety of products including feathers, leather, eggs, meat and oil. This makes the ostrich an ideal choice for farmers looking for a rare and unique product to market. Practically all of the ostrich can be used in some way so there is little wastage. The meat from the ostrich is a delicacy in a lot of cultures. And eating an ostrich means that everyone can have their share of leg meat. The eggs from an ostrich are very tasty and are the largest in the world.

1About 50 kilograms.2This means that the animal eats both meat and plants.3This means to have more than one mate.4Though it is important to note that these eggs are the smallest in comparison to the ostrich's size.