South Africa Content from the guide to life, the universe and everything 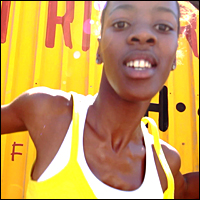 East London, Dundee, Queenstown, Bathurst and Kenton on Sea - no this isn't the UK but South Africa. Officially known as the 'Republic of South Africa - Land of Beauty and Splendour, World in One Country and Home of the Rainbow Nation', it is the home of around 50 million Rainbow People.

In an attempt to spread its power base, and confuse potential revolutionaries, South Africa has many capital cities. Pretoria is the administrative capital, Cape Town the legislative capital, Bloemfontein the judicial capital and Johannesburg the shopping capital.

From the Cape, you can then head off to Stellenbosch - the famous wine region - where you can pull up with a prepared picnic, sample a few bottles of wine, buy as many as you like and while away a couple of hours eating and relaxing. The vineyards are usually open throughout the summer months, though some require that you book your visit in advance due to the stream of tourists pouring through.

After Stellenbosch, it's time to take the Garden Route. This is the strip of land along the coast that, as the name suggests, is lined with beautiful flora. There are many ways to cross the route. One is by car and another is by taking the Outeniqua Cho Cho. This steam train travels along some of the route and offers some of the most spectacular views of the Western and Eastern Cape provinces. Along the Garden Route, stop off at Knysna. This is a small town on the coast that epitomises small town South Africa in all its glory. There used to be elephants in the forests around Knysna but these were wiped out in the last century.

The next stop on the tourist trail is the 'Last British Outpost' or Natal Province. The region's major city is famous for its architecture, modelled on, of all places, the seaside town of Eastbourne in the UK. The architecture brings an old world feel to the city but the high rises and beach front condominiums remind the visitor that it is a bustling city to rival its European cousins.

The city's Dolphinarium is worth checking out as is the beach - many say is the surf is among the best in the world and the water is nice and warm too.

There is an enormous zoo at Pretoria. The road to the zoo is lined with beautiful jacaranda trees, and street vendors who can weave magical animals, huts, trees, masks, people, from coloured beads and sell them to tourists for four times their value. This is the basis of African economy, as governed by Pretoria.

South Africa is also home to the highest bungy1 jump in the world. It is 216m high (650 ft) and the jump is off the middle of Bloukrans Bridge on the Garden Route in South Africa. It costs 500 rand - around 50 quid. The bungy guys are totally professional and will put you at ease. You just stand on the edge looking out over the mountains, '5-4-3-2-1-Bungy' and you jump out as far as you can. It's like flying, only more extreme. Your brain totally scrambles as it tries to catch up with what your body is experiencing.

The food in South Africa is simply stunning. The diverse cultures have brought into the national cuisine a plethora of dishes ranging from curry (thanks to the largest Indian township outside India) to melk tarte (a sweet flan made from milk and sugar). Another must is biltong - dried spiced meat that you buy according to its dryness. Biltong comes from among other things lamb, beef and ostrich. Simply delicious.

South Africans love food, so the easiest way to fit in is to invite everybody you meet to eat with you. Or if you're lucky, a South African may invite you first. If, for example, you are asked to visit the kraals of any of the Bantu tribes as an honoured guest, you will find food in large earthenware pots spread out on mats on the floor. The menu would probably consist of putu, the thick cornmeal porridge made from mealies, topped with a hot spicy stew and followed by homemade beer. Be warned: this beer is very, very strong.

South Africa has a reputation for being an unsafe country for tourists to visit. This is a little unfair as South Africa is no more or less dangerous than many other holiday destinations.

There are the usual tourist muggings that happen the world over but care should be taken when driving. Car jackings are a problem in South Africa, but with a little care, this needn't be an obstacle.

When hiring a car:

The rule of thumb is to pay attention to your surroundings as well as all the beautiful views that the country affords.

1"Bunjy jump" is alternatively spelled "bungee jump" in some parts of the world.2The cars are usually sold before they are stolen so the jackers know which vehicle to target.