Tourists Content from the guide to life, the universe and everything 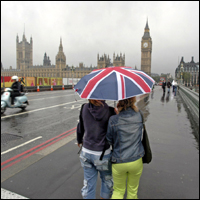 A tourist may be loosely defined as anybody outside their natural habitat who is not conducting research.

Tourists generally attempt to find places which are very much like their own homes in every way, except they are usually warmer, or offer one special thing that can't be found at home.

The History of the Tourist

In the Middle Ages, people stayed put. The average bloke lived and died within a few miles of where he was born. Probably the only excuse for leaving the farm was to go to war, when young men would head off to fight for their king and country, leaving the women to get on with the day to day work of running the country. Some of these men would return with garbled tales of how things were different in other places.

Then in the 18th Century, people started getting a little more money. At least, the rich people did. The poor people seemed to get even poorer, with many moving into factories, so not only did they have to work 12 hours a day, seven days a week, but they did it indoors in relative darkness.

Those who were well off, however, got richer. A new class of people emerged, who had spare cash, but weren't royalty. These had time on their hands and got interested in seeing the world. They began to do the 'Grand Tour', which started in England and went down through France into Italy, generally ending around Naples, and taking in all the sights such as Rome along the way. So the 'Tourist' was born.

The original tourists were English, but as times and the fortunes of nations change, the dominant role was taken over by various other nations, including the Americans and Japanese.

The 1960s and 1970s saw the arrival of the sun holiday. A different sort of tourist emerged - one who was quite content to lie on a beach all day and prop up the bar all night. This sort of tourist is more of a 'stay-puttist', but the term is not likely to catch on. Not even slightly interested in local customs and language, all he wants of the foreign country he is visiting is the sunshine. If they serve his own local food and play his own type of music, he is happy.

Eco-tourism and the 'Staycation'

In more recent years, when the damaging effect of air travel on the climate has been studied, a new form of tourism has evolved. Modern tourists, wishing to appease their consciences, no longer use the term 'tourist' to describe themselves. The new descriptor is 'traveller'. Those travellers who avail themselves of holidays, or rather as they would say, 'journeys of discovery', insist that their trips abroad to exotic destinations are entirely for the benefit of the native population of the places they visit.

The thinking behind this is mainly to do with one's carbon footprint and partly to do with the effect of imposing Western societal ideas on indigenous populations. So, if you are thinking about visiting the Galapagos or some other virgin territory, please do so by sailing boat and try not to scare the wildlife.

The 'staycation' is an alternative to being an eco-tourist - in this case the holidaymakers take day trips by bus or a train to a destination in their home country. The buzzword phrase is 'avoiding air travel'. Tourism in places such as Britain might be revived if this catches on, but the staycation tourist will need some proper outdoor gear, such as windproof jackets and rain hats, before one can enjoy much of North Wales or the Lake District.

How to Spot a Tourist

Every third shop in Egypt sells papyrus, every second shop sells jewellery, and every shop sells souvenirs.
- A Tourist

No tourist worth his salt can return home without buying some tasteless tat, such as snow-in-a-dome novelties, miniaturised national icons, or T-shirts with 'My Dad/Mom/Girlfriend etc. Went To... (insert tourist destination name) And All I Got Was This Lousy T-Shirt' slogans printed on them.

Some souvenirs can be quite bulky. Didgeridoos from Australia and unplayable Greek bouzoukis fall into this category - probably big enough to require an extra seat on the plane. And it is difficult to get that full-sized Ninja sword past airport security. Some tourists visiting Egypt have even been known to come home with a genuine camel saddle. Our advice to such tourists is to consider, does your camel really need a new saddle?

The typical tourist may be interested in 'local customs', but usually in a sanitised, understandable form. For example, traditional Greek music features the aforementioned bouzouki, which is a type of long-necked guitar-like instrument. Tourists expect to see bouzouki players when they go to Greece. But some Greek islands don't have any bouzouki players, as their own local music uses different instruments. They have to import bouzouki players from Athens for the tourist season. The rest of the year, they go back to the real traditional music.

The same effect can be seen in Scotland, where the traditional Scot talks like Rob Roy, wears a kilt, plays the bagpipes and eats nothing but shortbread and haggis. Tourists visiting Scotland will have encountered this guy. Normal people living in Scotland may not have1.

Tourists may be likened to a plague of locusts descending on a village and buying everything in sight. But they provide valuable employment for the locals, who would probably be unemployed if it weren't for the tourists. All those souvenirs have to be made somewhere, whether it is locally or in the sweatshops of China. Hotels, restaurants, bus companies and tour guides all benefit from the influx of the tourist, and while they may breathe a sigh of relief at the end of the day or of the tourist season, caring for these eccentric individuals is their livelihood.

So let's hear it for the tourist! May his hunger for the slightly out of the ordinary never abate, and may his camera never run out of batteries.

1Some might ask whether there are any normal people living in Scotland.