Minor Burns, Sunburns and How to Treat Them Content from the guide to life, the universe and everything 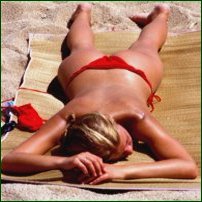 This Entry is for general information only and therefore, not a substitute for the medical advice of a GP or hospital doctor. If you have any concerns or doubts about a burn you should seek medical advice immediately.

What is a Burn?

Burns, both internal and external, are essentially damage to the skin's tissues, with external burns having two major causes. The first is having direct contact with a hot object or substance, such as an oven, a naked flame or a hot liquids1. The second is radiated heat from an extreme source, such as an industrial furnace or the sun2. Electricity, hazardous chemicals3 and friction can also cause burns. Internal burns can only be caused by direct contact, such as breathing in hot fumes or chemicals.

The skin is made up of three layers, and as each layer is damaged, the seriousness of the burn increases:

These classifications give a general idea as to what the levels of burn are, but those with second or third degree burns will usually have more than one depth of burn at the same time.

How to Treat Burns

With any type of burn, you first need to remove any further risk of burning. If the victim is someone else, it is important not to risk badly burning yourself as well, and to check their responsiveness if the burns are severe.

Firstly, remove the victim from the area or remove the cause of the burn. Any burning clothing should quickly be put out by dousing with water or by rolling on the floor. If the burn is caused by a chemical, quickly remove any excess chemicals from it by washing with running water.

Then remove any constricting clothing, jewellery, or watches, but do not remove any clothing stuck to the burn, as doing so will cause more damage. It is important to do this because blood flow may be constricted as the skin swells up, and also because any metal items will retain the heat and so keep on burning the skin.

If a burn is not cooled then it can spread through the skin's tissues, as heat still in the burn will radiate from the original burn area. The best, and easiest way to cool a burn is to use lots of cold water, either in a bath, shower or under a running tap.

There are also many home cures for soothing small burns, including anti-inflammatories (eg, aloe vera) and cooling agents (eg, the mint in toothpaste). However, many of these do not help burns at all, and some can even damage them even more (toothpaste can actually open up wounds). Aloe vera gel, lavender oil and lemon juice are the only home cures for burning that are pretty well foolproof, though these should not be used for burns where the skin has been broken because they can infect the wound. Never put greasy substances such as butter on a burn, because these will trap in the heat and don't allow the burn to cool down.

Treating the Different Types of Burns

Superficial burns can be treated easily at home, the best way is to cool and soothe the burn with water for 10 - 20 minutes until the burning feeling stops, usually by having a cool shower or bath. Small areas can be cooled under a running tap. Do not use ice to cool the burn, as if the area goes numb it may cause frostbite, leading to more damage to the skin. When the burning sensation stops, leave it to heal on its own6.

Most partial thickness burns can also be treated at home. Cool the burn in the same way as for superficial burns, then dress with a dry, sterile bandage (a bandage will need to be changed at least once a day, first cleaning the burn with soap and water and then removing any dead skin). The bandage is required because burns are very susceptible to infection. This is why you do not burst the blister, as it is the natural barrier and stops the infection getting in. Pain relievers, such as aspirin, can be used to ease discomfort.

For any internal burns, burns to hands, face, groin or any major joint, any full thickness burns and any burn you are not sure about how to deal with, medical aid needs to be obtained immediately. As a rule, if the burn covers 11% of the body, then medical attention should always be sought.

For any burn where medical help is needed, it is important that the person is given water in small doses until help arrives, so that they do not dehydrate7. Cover the burn with clean, dry clingfilm, but don't wrap it around too tightly, as this will constrict the area. If clingfilm is unavailable, a clean, damp8 non-furry cloth such as a tea towel can be used. The loss of skin also means there will be a serious drop in body temperature and it is important to keep the person warm. Cover the victim with a blanket, avoiding the injured area, which can be covered with a layer of tin foil to keep the heat in. It may also be necessary to treat the patient for shock - this involves laying the victim down with something soft under their head and with their legs propped up above head level, covering with a blanket, loosening of any tight clothing and staying with the person until help arrives, and doing all you can to avoid anxiety and stress. Do not give a burns victim alcohol.

For any chemical burns, wash liberally with running water to get rid of excess chemicals, then treat as a normal cut or wound. If the chemical is in the eye or another sensitive area seek medical aid straight away and wash with copious amounts of saline solution or ordinary clean water.

Although electrical burns may look small, they can be very deep and may interfere with electrical activity in the body, so extreme care needs to be taken and medical aid sought urgently.

If the person is taken to a hospital, it is because the burn is extremely serious and possibly life-threatening. The damaged area will still be protected by dressings, which will be changed regularly. Also, as there is a lot of water lost through the wound, the patient needs to be constantly monitored and may require intravenous liquids. Burns can easily become infected, and if infection is suspected then antibiotics may be used. Some new research has showed that some kinds of enzymes can prove beneficial for some serious burns victims by removing the dead skin without surgery.

Many full thickness burns victims, including those who have healed completely, will need physiotherapy (using physical methods such as massage, heat and exercises to restore movement to parts of the body) because the new skin is not as flexible, and also because they may have spent a long period of time without using the affected part of their body.

Sunburn is a type of burn caused by overexposure to the UV (ultraviolet) rays of the sun, with the exposure required to burn varying greatly between individuals. Sunburn starts with an initial redness of the skin, then is followed by varying degrees of pain, and may cause blistering. The sunburnt area feels hot to the touch and severely sunburned people can develop fever, chills, dizziness and dehydration. After the skin has healed, the dead skin peels off as it is replaced by new skin. The level of severity of the sunburn is directly proportional to the length and the strength of the exposure.

Sunburns are caused because the sun radiates UV rays, which pass through the epidermis to the dermis. The living cells in the dermis are very sensitive to sunlight, which dehydrates them, causing damage. UV rays can also affect damage the DNA in these cells, with this being a known starting point of skin cancer.

To try to stop the sunlight getting through, the body produces more melanin, which accumulates on top of the nucleus of the cells in the epidermis and protects the DNA from the UV light. This melanin is the pigment that causes the skin, eyes, and hair to have colour. When the body produces more it causes the skin to tan. People who can't produce melanin are known as albinos. People who naturally produce more melanin have darker skin, and so are less affected by the sun's rays. This means that the people who are most susceptible to sunburn are fair-skinned people, who don't tan easily, as they produce little melanin.

The Consequences of Sunburn

As well as the immediate discomfort, repeated overexposure to the sun should be avoided, as permanent skin damage can develop. This can take the form of premature aging and skin cancer, one of the main causes of which is overexposure to UV light. Briefly, skin cancer can take two forms, melanoma and non-melanoma. Melanoma is the most serious, forming on the outer layers of the skin and sometimes spreading to other parts of the body. If not detected early, it can be fatal. Non-melanoma is more common and comes in two forms, basal cell carcinomas and squamous cell carcinomas, both of which are tumours. Although the two forms are different in appearance and behave in different ways, they are seldom fatal.

What You Should do if You Get Sunburnt

Sunburn should be treated as soon as it happens, or as soon as you notice. After mild sunburn, a warm shower will bring about the peeling sooner and so get rid of the irritation earlier.

You can also bathe the burnt area in lukewarm water, to which you can add lavender oil, camomile, eucalyptus or baby oil. Another thing to do is to use aloe vera gel on the burn. These natural remedies are a good way to cool and soothe the burn and, as they all contain natural anti-inflammatory chemicals, they reduce the swelling.

However, the natural remedies do not help the burn to heal more quickly. To do this, you need to use after-sun lotion, a moisturiser designed specifically for this purpose, which also contains anti-inflammatory substances and will cool and soothe the burn. After-sun lotions also contain additives that help the burn to heal more rapidly. It is best to avoid oily or greasy things though, because these will trap in the heat and the pain and so don't actually help the burn at all.

Recently there has been research into DNA repair enzymes that will stop damage to the DNA in the skin cells, and the results have proved successful in significantly reducing the extent and longevity of sunburns as well.

The best thing you can do is not get sunburnt - see Sensible Sun Exposure for more information on how to prevent overexposure.

1Burns from hot liquids are known as scalds2Called sunburns3Mostly acids and bases that can easily cause corrosion.4The epidermis, which consists mainly of dead skin cells.5The dermis, where the living skin cells are.6For more information on sunburns and how to treat them, see below7Burns increase loss of water dramatically.8A dry cloth will stick to the wound and will leech water from it.