France Content from the guide to life, the universe and everything

In the days before exotic round-the-world gap years, voluntary work in tropical rainforests, and beer drinking in Australia, France used to be the place where many a teenager got to spend the year between school and university. It was brilliant - living in garret-style appartements and surviving on a diet of baguettes et fromage in cafés drenched in the smoke from Gauloises cigarettes. Great times...

At the heart of Europe and one of that continent's largest countries, France is the stuff of holiday maker heaven. Often maligned but one of the most visited countries in the world, the Hexagon, as it is also called, has a lot to offer a lot of people - from the Atlantic shores with their fine food, great sports and temperamental weather to the Mediterranean coast where perpetual sun has shaped a way of life that influences food, attitude and architecture. 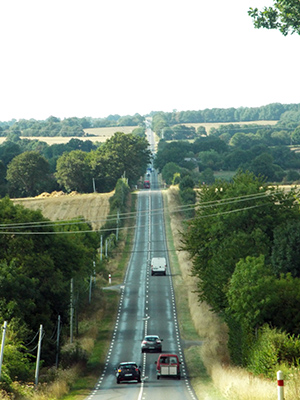 Being the hive of activity that it is, France is easily accessible through the usual methods. For those living on the continent there are some very friendly customs to pass through at the borders with Italy, Germany, Spain and Belgium. The crossing with Switzerland can be slightly more demanding as it's not a member of the European Community.

Changing at the borders can be a complete culture shock. If travelling by train along the coast from France to Spain, you will arrive at a small station called Port Bou. This is the frontier stop where you enter the Catalan region of Spain. As you walk along the platform, you have the French guards, French food in the vending machines and signs written in French. Turn the corner and after three short steps everything has been reversed - the signs are in Castillian/Catalan, the money is in pesetas and the food is Spanish.

People in the UK have the luck to be able to take the Channel Tunnel straight through to Calais, Lille or Paris. However, there is a fun way to get to France that has been the staple of British Bank Holidays since time immemorial - the ferry crossing.

Lovingly called 'booze cruises', the cross-channel ferry gives Brits the chance to buy cheaper cigarettes and alcohol. Even though Duty Free shopping has been abolished within the European Union, it is still cheaper to buy en masse on the continent than in the UK.

A large number of Brits have only seen France from the ferry terminals, the bus to town and the hypermarket. Duty free booze cruises became an extremely common occurrence when national papers started to give away series of coupons for free trips over. The British being easily swayed, jumped at the chance. The most popular destinations are Calais, Boulogne and Cherbourg.

If you can't make it to France for a holiday but may be interested in going, the Tour de France gives an overview of the whole country while being a great spectator sport.

Since 1903 this bicycle race, sponsored by L'Equipe, and hence the yellow jersey (because that used to be the colour of the newspaper) has taken France by storm every July.

It tours around France visiting a great many villages, towns, and cities, who pay for the privilege of having the tour on their doorstep. Every department of France has been visited throughout the history of the race. In modern times the finale has always occurred on the Champs Elysées in Paris.

The tour also features some of the toughest mountain stages in road racing, as both the Pyrennees and the Alps are covered, plus on occasion some of the peaks in the Massif Centrale as well. The 200 riders at the start of the race are whittled down throughout the month.

The Tour has also visited Belgium, The Netherlands, Luxembourg, Germany, Switzerland, Italy, Spain and the United Kingdom in the course of its existence.

How can you govern a country which has 246 varieties of cheese?
Charles de Gaulle, French statesman

De Gaulle realised the diversity of his country when he realised how many official cheeses there were. Cheese in France is controlled in much the same way as wine. Here are a few favourites.

With its on-going festival at Cannes, France has had an illustrious career on the silver screen and this section is dedicated to the women of old who breathed new life into cinema and redefined the female role.

Arletty is the actress who epitomised the feel the old France. Les Enfants du Paradis (Heaven's Children) (1945) is set in the theatres of Paris in the 1840s. Arletty brings to the role of Garance an ephemeral quality, but manages to convey the sense and morals of an era to a modern audience with clarity and conviction. In Les Visiteurs du Soir, she plays one of the two lovers who the devil tries to corrupt. When he fails, he turns them to stone - but their hearts are still human. The film was made in 1942 during the Nazi occupation of France. The devil is obviously Hitler. The film is slightly stilted but the images are clear and Arletty is the symbol that is France and the Resistance.

Simone Signoret was the archetypal French beauty with piercing green eyes, slightly buxom figure and a voice that would cause men to wilt at her feet. She was married to the French crooner Maurice Chevalier who had a fling with Marilyn Monroe. In La Ronde (1950), she played a prostitute in the 1900s who starts off a chain of love matches when she meets a soldier who in turn meets a housemaid. The chain continues full circle until it comes back to Simone Signoret who meets another soldier and the cycle continues ad infinitum. Signoret brings across an old world charm and dignity which has never been rivalled. In Casque d'Or (1952), she plays the love interest of an Apache who is executed. Here she brings to the role an impression of an indomitable woman with a heart of gold. For this she won a BAFTA1 for best actress.

Brigitte Bardot, called BB in France, shot to fame in Et Dieu Créa La Femme (And God Created Woman) in which she played a young woman who finds she is highly attracted to men. The film is utter tosh and Bardot is not particularly good, but in 1957 she broke the mould of female beauty, in that she showed more flesh than anyone else before her. She is now more famous for her animal rights campaigning but we must remember her for redefining the image of the young woman - not necessarily for the better.

Jeanne Moreau is the definitive actress of French cinema. No particular beauty, she brought a strength of character to the screen that has never been rivalled. In Jules et Jim (1962) she plays the love interest of two men whose lives are separated by war. She is in love with both and appears to be in control. However she is flawed and brings the love triangle to its close in a dramatic way by driving a car into a lake. She at once captured the spirit of a woman who outwardly appears to be strength personified but is ultimately doomed. In The Bride Wore Black (1968) she plays a woman whose groom was accidentally killed on their wedding day. She finds the people involved and one by one bumps them off in various unpleasant ways (the suffocation sequence being the most horrific). She manages to play a woman obsessed with steely determination but also gains the full sympathy of the audience. A truly remarkable woman.

Catherine Deneuve epitomizes the French ice queen. With a cool demeanour and oozing class out of every pore, Deneuve is the image of French chic - and a formidable actress too. In Repulsion directed by Roman Polanski (1965), Deneuve plays a manicurist living in swinging London but all isn't well. She is detached from her surroundings and when her sister leaves her alone in the house they rent, she starts to go insane and a killing spree commences. We see the film through Deneuve's eyes when cracks appear in the floor and hands lunge from the walls. Deneuve creates the image of a frightened girl with flashes of homicidal tendencies very effectively. Again, the audience is repulsed by her actions but pities her at the same time. Most will remember Deneuve for her role in The Hunger (1983) where she plays a vampire who will do anything for blood.

1BAFTAs (which stands for the British Academy of Film and Television Arts) are the British film and TV awards.