Water Content from the guide to life, the universe and everything 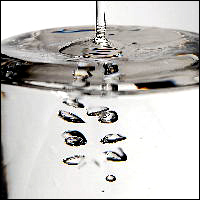 Water, in its purest form of one oxygen atom and two hydrogen atoms, in other words H2O for the technically-minded, is a transparent, odourless, tasteless liquid. It's apparently quite important since it can make up to three quarters of a human's bodyweight and accounts for 70.7% of the surface area of the Earth.

A curious property of water becomes evident when you freeze it. In general, as you freeze something, its volume decreases due to the reduction of kinetic energy of the atoms. In the case of water, however, its frozen state - ice - is actually greater in volume due to the crystalline arrangement of its atoms taking up more space. This means that ice floats on water, unlike many solids which plainly do not float on their liquid counterparts.

Water is a useful substance, but due to its range of uses, you may not be getting the most out of it. To help you, here is a list of some of the things you can do with water:

This is a type of water where the hydrogen atoms (usually with just a single proton in the nucleus) are replaced by deuterium atoms (one proton and one neutron in the nucleus). It's used chiefly as a source of deuterons for experiments in Nuclear Physics.

1If you're at a different altitude, your boiling and freezing points may vary.2A substance capable of reacting with acids to form salt and water.3Well, not all fires, it must be said. Some fires require a strange mix of chemicals in order to extinguish them.4Note - plants usually require more than just water to grow.