Batteries - Energy on the Move Content from the guide to life, the universe and everything 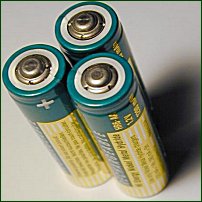 Batteries: who doesn't know them, or use them in one way or another? Nowadays, they come in all shapes and sizes, and the electricity they can deliver varies greatly. They power watches, cameras, mobile phones, remote controls, laptops, wireless keyboards and wireless mice, radios, electric toothbrushes, children's toys, torches... and not to forget: cars and car keys. They're so much part of our everyday life that we hardly ever think about them, except when the batteries are flat or we have run out of them altogether and can't take the photo, or listen to Queen on our Discman or, worst case scenario: open the car doors, let alone start the car. But what is a battery, who invented it and when?

A battery is a device usually consisting of two different sorts of metals and one liquid (an acid or a salt solution) as the electrolyte1. There are always two poles on a battery: a negative one, the anode, and a positive one, the cathode. Once the anode corrodes, negatively charged electrons are released from it and flow through the connected consumer load to the cathode (where the electrons combine with the materials in the cathode) thus constituting a useful electric current. Your battery will go flat sooner or later; how long it takes will depend on how much energy your device requires. Even without a connection to a circuit, there is an electrochemical reaction, known as self-discharge. Depending on the type of battery, this can be anything from 1% or more per day, to 5% - 10% per year.

Most people would think that batteries are a relatively recent invention, but apparently, they were invented as early as about 250 BC.

In 1936, in a village near Baghdad, workers found an ancient clay pot, dating back to about 250 BC, which looked very much like a vase. Archaeologists initially thought it was a scroll container, but the German archaeologist Wilhelm König2 identified it as an ancient battery. It contained a cylinder of sheet copper, whose edge was soldered with a tin-lead alloy. The bottom of the cylinder was pleated with a creased copper disk, and sealed with bitumen or asphalt. A corroded iron rod hung down into the centre of the cylinder, and the top of the cylinder was sealed with asphalt as well, keeping the rod in its place at the same time. It is not known what it was used for. Experiments with a replica filled with grape juice as an acid generated a current which would have been strong enough to electroplate one metal onto another, so it may be that this was what the battery was used for. This construction is known as the Baghdad Battery.

In the 18th Century there was a flurry of experimentations with electricity and the first discovery of what was later to become a battery was allegedly made by the Italian professor of anatomy Luigi Galvani (1737 - 1798), who was searching for 'animal' electricity. In 1789, he discovered that frogs' legs moved when they were touched with a metal tool while a nearby static electricity generator produced a spark. He went on to experiment, transfixing frogs' legs between a zinc and a copper wire. The resulting movement of the legs led him to believe that the frogs produced the electricity. However, he was proven wrong by the Italian physician Alessandro Volta (1745 - 1827) only ten years later.

Volta found out that the connection of two different metals by an electrolyte solution produced the electricity he was searching for. In 1775, Volta had invented an 'Electrophor', a tool which was capable of storing electric energy. He developed it further, hence creating the first plate condenser in 1783. When he read about Galvani's theory, he started his own experiments; one of them was putting a silver coin and some tinfoil on his tongue. The moment the metals touched each other, he noticed a sour tasting liquid building on his tongue. More experiments with different metals led him to the conclusion that an electric current was flowing between the metals. He discovered that the tension between the metals he used varied. The unit of electrical potential, the volt3, is named after him. The first battery Volta created, the Voltaic Pile (1800), consisted of several layers of copper and zinc plates, separated by sulphuric acid-soaked blotting paper4.

All over the world, people started researching electricity, based on Volta's discoveries. The 19th century saw many great inventions as a consequence. Major improvements to the original Voltaic Pile were soon made. Here is an overview of some of the many developments:

Other battery types were invented, such as the mercury cells which are powerful, very tiny, and very problematic for the environment as they are not rechargeable. The first small alkaline batteries were invented in 1949, and sold in an improved version (in the new AAA size) in 1954. This was the very year when Gerald Pearson, Daryl Chapin, and Calvin Fuller from the USA allegedly invented the first solar battery or solar cell - experiments with solar power had been made a good hundred years earlier, with Antoine César Becquerel observing photovoltaic effects while experimenting with electrodes in an electrolyte solution in 1839. Solar cells are commonly used in calculators, and as collectors on house roofs. They power satellites, too.

The 1970s saw the development from unstable nickel-metal-hydride alloys to their commercial use (of an improved, stable version) in the 1990s. It was the same period of time it took to get from the first primary lithium-metal batteries, to the rechargeable lithium-ion batteries we have now. Rechargeable lithium metal batteries proved to be dangerous, which led people to try non-metallic lithium, a lithium-ion battery. Although these still need to be treated with extreme care while charging or discharging, they are very popular with people who fly model airplanes, because of their small size and weight and are most commonly used in laptops. Faulty lithium-ion batteries causing the accumulators to overheat or even explode, led to a temporary banning of certain laptops on airplanes in 2006.

However, this is not the end to the research of batteries and environmentally friendly energy sources. A copper and a zinc wire stuck into a potato produces enough energy to power a digital watch. Renewable energy sources such as wind, water, and solar power are slowly increasing in importance as the ecologic conscience of people grows. During the 1990s, industry started research on an improvement of the fuel cell. Ideally, this will replace batteries and especially fossil fuel to power cars, hence reducing pollution and noise. First results are promising, but there are some problems to be overcome first, for instance hydrogen can't be stored in large quantities and is not easily available, along with a few other drawbacks like an overall efficiency of only about 24 to 32% at the time of writing. Methanol on the other hand is easy to transport and distribute, and has similar properties to gasoline, which makes it a likely candidate for a fuel cell powering a car. Still, the overall efficiency is relatively low, so the development still has a long way to go before any of these will replace the common fuels.

...And a Word of Warning

All common battery types are potentially dangerous and toxic to humans and the environment, especially when ending up in landfill (about 20,000 tonnes/year in the UK alone). Batteries containing Mercury and NiCad and Lead-Acid batteries are classified as 'Hazardous Waste' and recycling laws are afoot. Here are a few things to consider:

1This is known as a 'wet' cell. In a so-called 'dry' cell, the electrolyte is immobilised, such as through gelling or an absorbent paper.2Wilhelm König, German archaeologist and director of the National Museum of Iraq where he conducted the first thorough examination of the Baghdad Battery in 1938.3One volt (V) is the equivalent of the electric tension between two points of a homogeneous, evenly tempered electric conductor, where a time-invariant current of one Ampàre (A) produces the power of 1 Watt (W) between the two points: 1V = 1 W/A .4Or maybe cardboard or tissue, depending on what source you believe.5A term for a non-rechargeable battery. Two or more primary cells connected as a source of electric current is what we commonly call a battery.6Faraday cages are named after Michael Faraday, who built such a cage in 1836 and explained how it worked. A Faraday cage or Faraday shield is an enclosure or mesh formed by conducting material which blocks out external static electrical fields.7However, the current that is produced when you connect the two poles of a battery with some wire wool is enough to inflame said wire wool and can be used to light a campfire.