A Beginner's Guide To Digital Cameras Content from the guide to life, the universe and everything 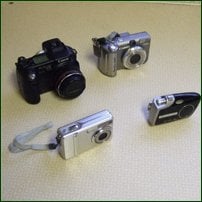 A digital camera takes colour photos that are stored in electronic format, as graphics files. The photos can be transferred to a computer to view, edit, email to friends, display on a web page or print out.

There are about 30 different brands of digital cameras and each of these has a number of models. New models are released all the time. It can be helpful to ask someone familiar with them to recommend a good one. It can also be helpful to read reviews in digital photography magazines or on the Internet (use a search engine to find them).

Digital cameras are sold in specialist camera stores, electronics stores, department stores, and on the World Wide Web. They vary greatly in price. The cheapest ones cost about the same as a cheap 35mm camera. However, they aren't worth buying due to the very poor photo size and quality and lack of features (no flash, no LCD screen etc). A good quality camera costs about ten times as much.

There are several different battery types, and a camera will accept one or more of them (but only one type at a time). Digital cameras use up batteries very quickly - sometimes within hours - so it's best to use rechargeable ones. Some cameras even come with a recharger. Alternatively, they can be purchased separately. Some rechargers take 45 minutes, others take hours.

Some cameras can use battery packs - a set of batteries connected to the camera with a cable. This lasts much longer than using the batteries individually.

Nearly all digital cameras store their photos on a removable media card, which is a small, thin piece of plastic containing an embedded memory chip (a few cheap models store their photos on a built-in memory unit instead). The amount of storage space on a card is measured in MB (megabytes). Some cards can store up to 1 GB (gigabyte). The amount of space a photo takes up depends on its size and quality and to a small extent on the type of subject. A small photo may take up 130 KB (kilobytes) of space, a larger one may take up nearly 1 MB. Photos can be deleted from the card (usually after being transferred to a computer) so that the space can be reused.

Most cameras come with a media card. One can be bought separately if the camera doesn't have one or if the one that comes with it doesn't have enough storage space. Read the camera's manual to find out which type of media card(s) it accepts.

Most digital cameras have an LCD (Liquid Crystal Display) screen on the back of the camera, up to 2.5 inches square. This is used to display the photos stored on the media card. Buttons are used to scroll through them one by one or display a number of them on the screen at once in a smaller size. It's possible to delete one or more unwanted photos. Because the screen is small and uses a limited number of pixels (dots), the photo won't look as good as it does on a computer, and bright points of light may be displayed that won't appear on the final photo.

The LCD screen is also used to display various menu options which can then be selected using buttons. This allows settings such as the photo size to be changed.

A digital camera has one of these types of viewfinders:

Most cameras have a built-in flash that triggers automatically in low light. There may be menu options to turn it off for situations where flash photography is prohibited or wouldn't be useful or to force the flash in other situations (eg, to photograph a person standing in front of a brightly lit window). The camera may have a 'red eye reduction' mode which fires a preliminary flash just before firing the main one and taking the photo. It may also have a 'slow synchro' mode to use at night, which fires the flash and uses a slow shutter speed to photograph the background clearly too.

Resolution means the number of pixels (dots) used by a camera to create a photograph. A camera's maximum resolution is measured in MP (megapixels ie, millions of pixels). Very cheap cameras have a resolution of less than 1 MP, better quality cameras have resolutions of up to 6 MP.

Photos are stored in a standard graphics format, usually JPEG. This compresses them so that they take up less storage space, but there is a slight loss of quality. Some cameras can also store photos in TIFF format, which is uncompressed, and takes up a lot of storage space such as 8 MB. Some cameras can also store photos in a 'raw' format ie, without any compression or processing of any kind. However, they have to be converted to a standard graphics format to share with other people or place on a webpage.

Many digital cameras have an optical zoom, which means that the camera lens physically moves to zoom in on a distant object, as it does on some 35mm compact cameras. The feature is described as 'x zoom' eg, '2 x zoom'. That means that an object photographed when the camera is zoomed in will take up twice as much of the frame as it would normally. Many cameras have a 2 x, 2.5 x or 3 x optical zoom. Expensive cameras may have even better ones, up to 10 x.

This isn't as good as optical zoom. The lens doesn't move at all. Instead, the camera crops and enlarges the photo using its built-in software. There can be some loss of resolution so the subject can look less sharply defined.

Many cameras have both optical and digital zoom. They can be used together.

Many cameras have a 'macro' mode to focus on and photograph small objects or parts of objects. Some cameras can go as close as 2cm to an object, others have to be further away, such as 5cm, 10cm or 14cm. Optical zoom can't be used with macro mode, but digital zoom can.

Some cameras have a 'movie' feature to take a very short video. The maximum length varies between models. Some can take up to 8 seconds, others 30 seconds, a minute, a few minutes, or even 8 minutes on a very expensive camera. Some cameras record sound, others don't. The video is stored in a standard digital format such as AVI and when transferred to a computer can be played using a number of different programs (eg, QuickTime). It has a low resolution such as 320 x 240 pixels but nevertheless takes up a lot of storage space. A 60 second video with sound takes up about 9 MB.

This feature is just for fun; anybody who really wanted to take videos would buy a video camera or digital video camera instead.

Various other features are available on different cameras eg, timers, remote controls, language selection for menus, voice captions (stored in a standard format such as WAVE), cables to connect the camera to a TV set to view the photos on there, a hot shoe to connect an external flash, lens adapters to attach different lenses, an option to use the camera as a web cam, light sensitivity settings (equivalent to ISO settings on 35mm cameras) or manual settings (for exposure, white balance, contrast, shutter speed, focus etc). Some cameras have features normally found in graphics software such as saving thumbnails of photos or combining images.

Connecting To a Computer

There are a number of ways to connect a camera or its media card to a computer to transfer the photos. Many cameras can be connected to a computer's USB port or serial port with an appropriate cable. There are also card readers or adapters available which connect to a PCMCIA port, parallel (printer) port, SCSI port or IEEE 1394 interface or fit into a 3.5 inch floppy disk drive. Some cameras can use an infrared light connection. Most Sony VAIO laptop computers have built-in slots to accept memory sticks. PCMCIA cards can fit directly into a PCMCIA slot on a notebook computer.

Many cameras come with graphics software on a CD. If not, it's easy to buy a suitable graphics program (eg, Adobe PhotoDelux). It's used to transfer photos from the camera to the computer, display them, edit them and print them. It can enlarge or reduce photographs, rotate them, change the brightness level or the intensity of the colours, convert colour photos to sepia or black-and-white, replicate parts of photos, cover unwanted objects in photos, merge different images etc.

Before buying software, check that it's compatible with the computer. Find out which operating system(s) it runs on and the memory and hard disk space requirements.

Many cameras have a feature called Digital Print Order Format (DPOF) which allows you to specify which photos should be printed and the number of copies. You can also specify whether the date should be printed on them. DPOF settings are stored as text files on the camera's media card.

Photos can be printed using a colour printer eg, a bubblejet. Special paper is required and it's best to buy photo quality ink, too. Usually, a graphics program is used to print photos from a computer. However, some cameras can be connected directly to a compatible printer using a cable or infrared light, and photos can then be printed directly from the media card.

Alternatively, there are many shops that will print them for you if you take the media card to them. Some businesses will also allow you to upload photos to their website and then collect the prints later. It costs only slightly more than 35mm prints (if you consider the cost of both film and processing for those).

1The battery's capacity decreases so it doesn't last as long after each recharge.