Sunsets and why we see the Colours - a Photographer's View Content from the guide to life, the universe and everything

To a photographer, the Sun is the most important source of light and colour effects.

Every day the Sun allows us to see our world by providing us with a clear white light. As the Sun reaches noon (wherever we are) the sunlight appears at its purest and brightest. This is simply because at midday the light will have to penetrate the least depth of the Earth's atmosphere.

At dawn and dusk the sunlight has to penetrate the atmosphere almost horizontally, so the light has to pass through a greater volume of atmosphere. It is this greater distance that gives rise to the colourful effects we see in the sky. It is not caused by the sunlight, it is atmospheric conditions which produce the colourful effects. Apart from weather conditions, what causes the most of the coloured effects are the particles suspended in the atmosphere. The particles have various origins, the most common of which are:

The wide diversity of effects we see are simply variations of the conditions mentioned here.

As previously mentioned there are always particles in the atmosphere; as weather conditions vary the particle density also varies. A yellow tinted sunset is simply the sign of a higher concentration of particles, or a high density of atmospheric contamination. Scientifically speaking the filtering effect of atmosphere is increased allowing fewer of the wavelengths of light to be seen. It is the longer red and yellow light wavelengths you are able to see in these conditions. The particles scatter and exclude the weaker violet and blue end of the spectrum.

The intensity of the sunset effects will vary depending upon the density of the partices. Yellows with tints of green, the golds and the oranges give us breathtaking sunsets.

The opposite of the yellow sunset is the blue. The blue sunset is the sign of low density atmospheric contamination. Scientifically speaking the filtering effect of atmosphere is low, increasing the number of wavelengths of light that can be seen by the viewer. The wavelengths you are able to see in these conditions include the blue end of the spectrum, although some scattering of the light occurs. This gives us some wonderful blue, red and purple effects.

Why the Sky is Blue

The sky is clear blue during the day because the light from the Sun has to penetrate a thinner layer of atmosphere. The wavelengths of light are subjected to much less particle filtering and the blue light is scattered towards our eyes so we get a nice blue sky, clouds permitting.

Remember that clouds do add some very interesting photographic effects. 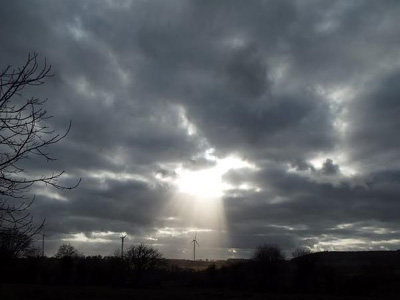 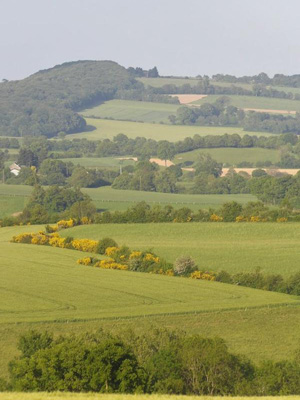 Haze is a term for local effects caused by particles in the atmosphere, and could be smoke or minute water droplets suspended in the air. It interferes with the visible light, and is most noticeable if viewed over a long distance. Haze is also an effect that is important enough to be mentioned in the BBC shipping forecast.

For photographers, some haze can be reduced by the use of a haze or polarizing filter. However, haze can be used to your advantage, creating a pleasing, layered effect in landscape and seascape photographs.

How To Photograph A Sunset

If this is a description of your ability:

I am only an occasional snapper of pictures - my sunsets are usually just a red dot in an uninspiring sky!

then hopefully the following tips will assist you in achieving better results.

The most important thing is to know your camera - sounds obvious but be aware of what the camera's ability is. The problem is intense bright light, which in turn creates deep black shadows. First thing to remember is to expose the bright areas correctly. Why? Simple - you cannot recover overexposed areas as there is no detail or colour left in the image, but details in shadows can be recovered later - see the Editing Your Sunset Photograph section of this Entry. The best lens to use is a medium telephoto; this will give you the best possible image of the sunset. Be careful - especially single-lens reflex (SLR) users - you are effectively looking directly at the Sun through a telescope, so don't use a very powerful lens.

A polarising filter is also extremely useful as it reduces excess glare. This filter requires some experimentation1 but it can be used in conjunction with a neutral density filter.

The author's preference is for the square acrylic filters as they are easier to use. They slide into a holder that fits into the filter thread of the lens. They are tough and will last you for years - some of the author's are over 20 years old. The holder easily transfers on to all of your lenses. No filter thread? No worries - there are also holders that have a ring mount which will clamp on to the lens. The holders allow you to use two filters at once - very useful!

This can be regarded as cheating by some and if overdone it is very obvious. However, a small tweak to the darker areas of the photograph to increase the exposure there and get more detail is quite acceptable. Just don't overdo things - it will show in the final image. The cost of photo manipulation software is not too high, but you probably already have some - Microsoft does include a simple but excellent photo editor in the 'Photo' programme in the more recent versions of Windows. Remember - do not alter your original image, which you might later regret. Save a copy and work on that.

1It creates various effects as you rotate it in front of the camera lens.