Telescopes Content from the guide to life, the universe and everything 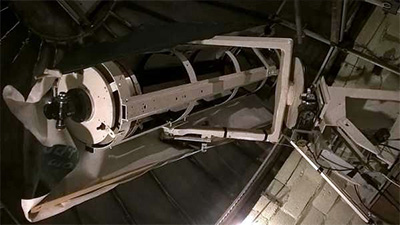 Telescopes fall into two broad categories: optical ones and radio ones. Of course, you could easily argue that they are both the same thing because visible light is just another chunk in the electromagnetic spectrum, just like radio waves, and you'd be right. What separates them is that you don't need any fancy electronics to use the former variety - you can see the stars at night with your naked eyes, after all. And it's a good job this is the case, because radio frequency electronics wasn't that hot a topic 4,000 years ago when astronomy was first studied.

The simplest telescopes were first created, it is thought, in 1609 by a Dutch spectacle maker named Hans Lippershey, but it was the infamous Galileo Galilei who first used them to look at the stars. They consisted of two glass lenses of different thicknesses at either end of a tube, which could, in the more advanced versions, be shortened or lengthened to improve the focus. This arrangement held for many hundreds of years, with the addition of various strengths of eyepieces for better magnification. This type of telescope, where the light travels in a straight line through two or more glass lenses, is known as a 'refracting' telescope.

It's very difficult, however, to manufacture clear and unblemished glass, and quite a lot of light is absorbed by each of the lenses, leading to a distorted and dim image. This left room for the design of the 'reflecting' telescope, which uses of curved mirrors to magnify the image. In a simple Newtonian reflector, light comes from a distant star and travels unimpeded straight down through the body of the telescope tube, until it hits a parabolically shaped mirror at the end. It then bounces back up while being focused by the curve of the mirror onto a much smaller mirror suspended in the middle of the tube at the top (where the light first came in). This secondary mirror is angled at 45° so that the light bounces off it and out through the side of the tube through the glass lens eyepiece.

There is another type of reflector, known as a Cassegrain reflector, which is used for all the largest optical telescopes in the world because it effectively allows you to 'fold up' much of the optical length into a relatively compact body. It's much like the Newtonian reflector in that light comes down the tube and hits a mirror at the end, getting reflected up to a secondary mirror at the top. The secondary mirror is mounted flat this time, though, so the thin beam of light bounces back down the tube again, and comes out through the eyepiece by passing through a small hole in the main mirror.

It's possible to make mirrors as large as four or five metres in diameter, although they do take some looking after. Some reflectors have clusters of many small mirrors, each of which is computer-positioned to simulate one giant mirror. And that is the problem with optical telescopes (apart from the problems of daylight and artificial light pollution) - you are limited by the fact that your reflecting surfaces have to be well within the tolerances of light itself, within billionths of a metre. But there is an alternative...

As you are no doubt well aware, stars give out light. To understand what is really going on, though, you need to have an understanding of what light is, and what a narrow 'field of view' humans have. It's not necessary to go into the details of electromagnetic theory here, but suffice it to say that the range of wavelengths that go to make up the visible chunk (ie the bit that you can see) is just a tiny piece of the whole radio spectrum. You'll not be surprised, then, that stars also give out light in virtually every other part of the radio spectrum at the same time. Of course, you can't see this radiation with optical telescopes, so you'll need to get hold of a nice big radio telescope.

A radio telescope is basically an aerial, made of metal, that picks up radio waves of specific wavelengths and turns them into electronic signals in a wire. You can then feed these signals into a computer, mix them with directional information (ie where you were pointing the aerial in the sky) and generate a picture on a screen. While you can do this at any time of the day or night, there are certain wavelengths that you just can't explore from the Earth, due to atmospheric absorption. There is, however, a wavelength 'window' in the atmosphere between about 1/10th of a centimetre and 100cm where the stars shine very brightly in the radio spectrum. It's at these wavelengths that modern astronomers can explore a very wide variety of astronomical phenomena, from the stars to interstellar gas clouds.

Because you're dealing with wavelengths at which you can fairly easily build reflecting surfaces - typically around a few centimetres - you can build huge radio telescope dishes to collect and amplify as much radio noise as you can find. The largest radio telescopes are hundreds of feet across, and similar antennae are used to communicate with our most far-flung space probes such as Voyager 1 and 2. The largest single radio telescope has actually been built inside a natural crater at Arecibo on the island of Puerto Rico - it's nearly a quarter of a mile across!

In the same way that you can simulate a larger optical telescope by using lots of carefully aligned smaller mirrors, you can build even more huge radio telescopes by aligning many radio telescopes. In fact, there's no real limit to the distance you can space radio telescopes to make an 'array' - one of NASA's long-range plans is to place a radio antenna on the moon and coordinate it with one here on Earth, to create a telescope that's effectively a quarter of a million miles across.

Radio telescopes that are free of Earth's atmosphere can explore the other regions of the electromagnetic spectrum as well, such as X-rays, ultraviolet and infrared. There are several telescopes in orbit which can explore our universe at all these wavelengths.

Another useful feature of the electromagnetic spectrum as far as astronomy is concerned is that different elements, such as hydrogen and helium, have different 'absorption spectra'. Basically speaking, each element has a signature of thin black lines in different parts of the spectrum where those particular atoms don't emit any light. These spectra are well known for all the elements, because we can see and measure them here on Earth. Then, when we look at the stars shining, we can actually 'see' what they're made of by seeing what combinations of absorption lines are in a star's spectrum. This is an extraordinary phenomenon, allowing us to find out a very great deal about the nature of stars from inconceivably large distances.