Orange - the Colour Content from the guide to life, the universe and everything 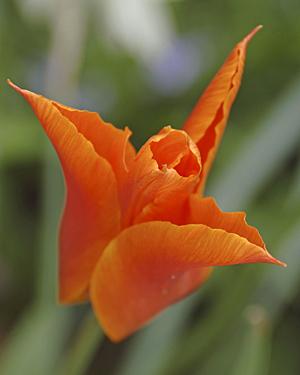 Orange is a colour. That is to say, it is a sensation in our brain caused by combinations of light of particular wavelengths striking the retina of the eye.

The simplest type of orange is produced by 'monochromatic orange light', light of a wavelength of approximately 610 nanometres1. Such light can be found in the rainbow, between yellow and red.

Orange can also be produced by mixtures of lights of more than one wavelength. For example, red light and yellow light mixed together produce the sensation of orange, even though they do not physically combine in any way.

The Sensation of Orange

Our eyes have colour sensors in the retina, which are called 'cones' because of their shape2. There are three different types of cones, which are most sensitive to long, medium and short wavelengths of light respectively. Let's call them L, M and S cones. Light with a wavelength of 610 nanometres causes the M cones to fire at about 20% of their full capacity, while the L cones give back about 70% of their full capacity. This is interpreted by the brain as 'orange'.

The same 20% / 70% pattern can be caused by a mixture of yellow light and red light, so the brain sees this as orange too.

Ancient literature is not good on colours - for a start, the ancients rarely mentioned the colour of anything. When they did, it is not always clear what colour they were talking about, the same word often being used for two colours that we would consider quite different from each other.

The first references to the colour orange are found in the Middle Ages. In those times, knights in armour were indistinguishable from each other, so to tell each other apart, they painted their shields in bright colours and patterns - only a limited selection of colours were available, the most popular being silver, gold, black, red, blue, green and purple. The first recorded references to the colour orange are from this period, although it bore a different name: the Anglo-Norman 'tenny' which is related to the modern word 'tawny'. Even so, it was rarely used.

The Name and the Fruit

The modern word 'orange' originally meant a type of fruit rather than a colour. The word 'naranga-s' in Sanskrit, an ancient Indian language, meant a particular type of fruit tree. This came into Arabic as naranja, and as the tree and its fruit were introduced to Europe from the east, the word became narancia in Italian. Then the 'n' was dropped from the front of the word and it became arancia, from where it moved to France and its present form of orange. The French word came into English unchanged. It was only later that it came to mean the colour as well as the fruit - this was first recorded in 1542.

It's interesting to note that Spanish still retains the 'n' at the start of the name of the fruit and colour - 'naranja'.

The town of Orange in Provence in the south of France was originally nothing to do with fruit. The Roman name of Arausio dates from before oranges were introduced into Europe. The name was gradually changed from Arausio into Orange and this change was probably influenced by the name of the fruit trees which grow in the south of France.

Medieval Europe was ruled by a network of related families. Sons of one ruling family were married to daughters of another, resulting in some kings owning possessions across large areas of the continent. One such was the ruling family of Spain, who also ruled Provence and the Netherlands. The ruler of the Netherlands was given the title of 'Prince of Orange and Nassau'. The Netherlands subsequently became independent of Spain and no longer ruled Provence or the town of Orange, but the Dutch king kept the title of 'Prince of Orange'. The colour orange thus became the state colour of the Netherlands, and still is to this day. Queen's Day in Amsterdam is just a riot of orange everywhere. The Dutch flag was three horizontal stripes of orange, white and blue, although somewhere along the way the orange on the flag got converted to red.

In the late 17th Century, Prince William of Orange married Mary, Queen of England, Scotland and Ireland. William and Mary ruled the 'Three Kingdoms' jointly as king and queen (unlike later ruling queens, whose husbands are 'prince consorts' and don't rule). William drove the rival King James out in a series of wars called the Jacobite wars. These established Protestantism as the official religion in Great Britain and Ireland, and William of Orange became a particular favourite of the Protestants of Northern Ireland. Orange became the colour of the supporters of Unionism, the movement which favours Northern Ireland being part of the United Kingdom.

The French suggested that Ireland should adopt a new flag instead of the old gold harp on a blue background (which is still visible in one quarter of the flag of the Queen of the United Kingdom). They came up with the tricolour flag based on their own red, white and blue flag, but with the colours green, white and orange. The green represents the Catholic Irish of the south, and the orange represents the Protestant Irish of the north. The white indicates peace between the two groups. Unfortunately, the flag has been adopted by rabid nationalists in the north; it is unlikely that the Protestants recognise themselves in the orange of the Irish flag, or see it as a symbol of peace.

This is really an addendum to the section on Orange in Politics. Bizarre though it seems, the orange colour of modern carrots may be a tribute to the national colour of the Netherlands. Carrots used to come in various shades of white, cream, yellow and even purple; the first orange carrots appeared in the Netherlands and may have been an effort by carrot breeders to celebrate Dutchness. The details, however, are far from clear, as the history at the Museum of Carrots shows.

In any event, the orange colour of carrots comes from naturally occurring ingredients called carotenoids which are antioxidants and therefore good against cancer.

Orange in the Decoration and Fashion Industries

Orange is a very strong colour and as a result is rarely used in decorating. The colour orange had its heyday in the 1960s and 70s when psychedelia introduced the concept of violently clashing colours and patterns - it became trendy to paint furniture orange. The colour also made itself felt in women's fashion - with brightly coloured boots, handbags, and even dresses.

Orange made a comeback in the 1990s, often accompanied by grey. This was particularly popular in the form of orange items appearing in black-and-white photos - the strong colour offset by the complete lack of colour in the rest of the picture. You'll still see this happening occasionally.

Nowadays, orange is a particularly nice colour in women's fashion for accessories, to brighten up a black or dark-coloured outfit. Orange is the complimentary colour of blue, and can also be used to great effect with lime green. It's used as well in at least one official uniform, that of the Pontifical Swiss Guard in the Vatican City.

Of course, orange can be an unwelcome result of too much make-up, artificial tan or excessive use of the tanning sunbed. People suffering from such excesses are frequently described as being 'orange people' or even 'tangoed', after Tango, the British orange fizzy drink.

Probably the most recognisable use of orange in clothing is the saffron-dyed robes of Tibetan Buddhist monks. Buddhist monks from other countries are not restricted to orange, though, wearing a variety of colours from purple to yellow.

Nothing Rhymes with Orange

Orange is one of many words for which there is no exact rhyme in English, but it is probably the most cited one. This is actually used to hilarious effect in the computer game The Curse of Monkey Island, where the only way to stop an interminable rhyming game is to come up with a sentence that the other character can't find a rhyme for.

There are of course some approximate rhymes for 'orange', which may be more successful in certain accents:

Two items named orange which are not orange:

And finally, an item that is unexpectedly orange:

1A nanometre is one billionth of a metre. That is, there are 1,000,000,000 nanometres in a metre.2There are also other sensors called 'rods' but they are not involved in colour vision.