Eyesight Content from the guide to life, the universe and everything 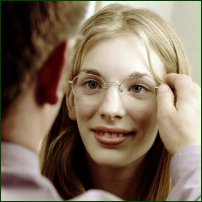 What does it mean to see? How do we see? How does the mind interpret vision? How does the ability to see affect our lives? What other forms of sight or vision exist? These and other questions will be discussed in this Entry.

Sight is our main access to the world as we know it. A quarter of our brain is devoted to the function of vision, the visual cortex is the most massive system in the human brain. More information enters the human brain through the eye than through any other sense organ. Containing some 170 million rods and cones, 70% of the human body's sensors are found in the eyes. To see is equated with terms such as: to perceive, to understand, to discern, to comprehend and to know. One dictionary defines sight or visual perception as the result of vision, being the ability to detect light and to interpret (see) the consequences of light stimuli. The resulting perception is known as eyesight, sight or vision. We do not always see something even when it is right in front of our eyes. For example, we do not notice our nose, even though it is clearly visible. Thus, to see, in effect can mean, to not see.

For eyes to function:

The physical process which takes place in visual perception goes like this:

If you could see the inside of an eye itself, first of all, everything is being projected upside down. Secondly, the muscles which control the eye are always moving, so there is a constant shaking or vibrating which occurs. Not only that, but the picture sent is blurry in all but the middle. The mind does not really see a picture from our eyes, but rather it receives a complex jumble of signals which it has learned to interpret into a clear, steady image. Thus, truth be told, it really is all in the mind. There are many cool mind games and eye tricks, which exploit this.

Much of our ability to see depends on the control of focus. To focus is to converge both eyes to a central point of interest; to concentrate on something. Without this we would merely see a vast mishmash of colours and shapes, with no way of differentiating what is what. Humans can distinguish over 10,000 different colours. This is where it becomes very useful to have two or more eyes. Because each eye projects a separate, distinct image, the brain overlaps the two images to create a three dimensional picture. A person who only has one eye must constantly struggle to define depth which is the ability to judge objects that are nearer or farther than others. When the eyes focus on an object they block out all other objects in the field of view. Like many other predatory animals, we humans have what we call stereoscopic vision. This is vital for clear sight to work in three dimensions, for judging distances and for the brain to recognise and process information. Stereoscopic vision occurs chiefly in predators as it is very useful for hunting and tracking down prey.

Many species can perceive wavelengths outside of our own range of light visibility, and that's not all...

1Sadly, in many parts of the world, it is all too common to suffer loss of eyes as a result of antipersonnel land mines - which are designed to wound - not kill. About 80 million land mines are still buried worldwide. About one third of land mine victims are children. Loss of eyes is also common from bomb blasts and shooting accidents.2If in doubt, look for the light switch, or make sure that you always carry a lighter, key-ring torch or mobile phone. These instruments are the modern answer for trying to find the keyhole in the dark.3nm = nanometer. A meter is the length of a path travelled by light in a vacuum during a time interval of 1/299,792,458 of a second.4We must be clear that these things are not classified as sight, they are advanced forms of hearing - which come close to the higher level of viewing the world - but they are not sight itself.